Difference between revisions of "Euglenozoa"

A Microbial Biorealm page on the Euglenozoa 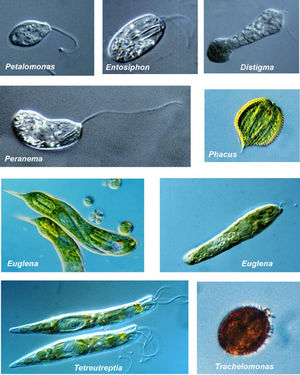 Members of the phylum Euglenozoa. Image from The Euglenoid Project.

The category "Euglenozoa" encompasses a large variety of eukaryotes in the kingdom Protista, most importantly the euglenids and the kinetoplastids. They are flagellated (in pairs), and are found in both free-living and parasitic form. The taxonomy of Euglenozoa has long been a subject of debate: while some euglenoid genera possess chloroplasts and are thus classified with algae, the majority of Euglenozoa's genera are colorless and without chloroplasts, which do not adhere to typical algal characteristics. Instead researchers now believe that any euglenids with chloroplasts acquired them through endosymbiosis with green algae. Genetic studies show that, despite the name's suffix ("zoa" meaning animal) members of Euglenozoa are neither plant nor animal--rather they are the living relatives of some of the earliest unicelluar organisms (eukaryotes). Some members of the group are parasitic, including [trypanosoma.html Trypanosoma] and [leishmania.html Leishmania], and can cause severe illness in their human hosts. The majority of Euglenozoons possess two flagella, complex cellular projections that lash back and forth to propel the organism from place to place. Members of Euglenozoa are unique among other organisms due to the presence of paraxial rods in their flagellum.

The genetic structure of a parasitic member of Euglenozoa, trypanosoma brucei, is interesting and confusing to many scientists because it provides the organism with the ability to successfully dodge the host's immune system. While initially there is a massive immune response to the invading parasites, trypanosoma brucei manages to evade much of this defense system, eventually wearing the immunities out and effectively taking over after the defenses are weakened. Scientists have found that trypanosoma brucei's genetic code allows it to copy the host's antigens in its cell covering, thereby making the parasite undetectable amidst the host's uninfected cells. For more on this phenomenon, see [www.med.sc.edu:85/%20lecture/trypanosomiasis.htm South Carolina School of Medicine Molecular Parasitology: Trypanosomes]. 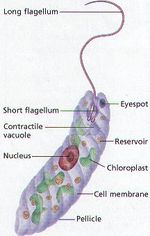 Cell form and structure differs slightly between the two main groups of Euglenozoons, the euglenids and the kinetoplastids. Both groups have cell characteristics which distinguish them from the cells of other organisms: kinetoplastids have a DNA-containing clump at one end of the mitochondrion known as the kinetoplast, while the euglenids' cell surface, called the pellicle, consists of the plasma membrane, a series of proteinaceous strips underneath the plasma membrane, and groups of microtubules associated with each strip. The pellicle is flexible and allows the cell to move around. The mitochondria of all Euglenozoons almost always have discoid cristae, disk-shaped folds within the mitochondria which provide more surface area for cell respiration. Peroxisomes or glycosomes (not both) may be present. The cytoskeleton includes a regular array of cortical microtubules. The contractile vacuole if present empties into the flagellar pocket. Distinctive cruciate extrusomes are present in some members of all four subtaxa. Chloroplasts, if present, have chlorophylls a and b and an envelope of three membranes, but the plastids lack starch and are located in the cytosol. Euglenozoa contains both autotrophs and heterotrophs; the euglenids with chloroplasts are able to photosynthesize for energy, while the rest either feed on bacteria or through absorption.

The life cycles of Euglenozoons varies according to group; the life cycle of a parasitic kineotplastid, for example, is not the same as that of a euglenoid. A kinetoplastid member of Euglenozoa, such as trypanosoma brucei which causes African sleeping sickness, is transmitted from host to host by a vector, most commonly the tsetse fly. After being ingested by the tsetse fly during a blood meal, trypanosoma brucei takes on the procyclic trimastigote form in the vector's midgut. There is some debate about the method used by the parasite to move from the midgut to the fly vector's salivary gland; (see Tulane University's Medical Protozoology site for theories) once the move has been made trypanosoma brucei morphs into its epimastigote form and attach using its flagella to epithelial cells. After morphing into the metacyclic trimastigote form, the mitochondria loses the cristae and trypanosoma brucei is free to move about the salivary gland, waiting for the vector to feed again so that the parasite may be delivered to the next host.

The euglenoids live very differently, with life cycles closely related to those of green algae. Euglenoids, however, share reproductive habits with their kinetoplastid relations by reproducing mainly by asexual binary fission. Euglenoids reproduce very rapidly, absorbing their flagellum and dividing haploid cells through mitosis. Mitosis produces 4-8 flagellated haploid cells, called zoospores. The zoospores then break out of the parent cell and grow to full size. 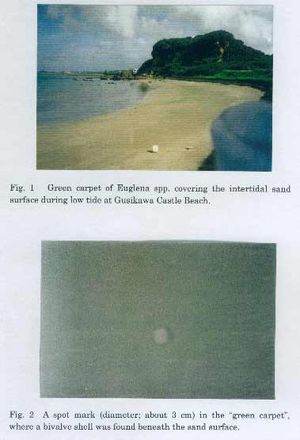 Euglena in the Intertidal Zone Images from Kiyoko Kondo, Department of Chemistry, Biology, and Marine Sciences, U of the Ryukuyus.]

Euglenozoons live in a variety of ecosystems, ranging from freshwater streams and ponds to the marine environment to the bloodstreams and systems of vertebrate hosts. Euglenoids that are phototrophic (possess cytoplasts) are found in shallow areas which provide the warmest, sunniest water where these organisms can best thrive. Aquatic plants provide nutrients and nourishment. Certain species of Euglena have been found in mud, swamps, and in or on the sand of intertidal zones. Kinetoplastids are found in the bloodstream and tissue of a human or animal host and in insect vectors, and are therefore limited by the ecological distribution of the insect which carries them from host to host. Vectors can be found, depending on the type of insect, on most continents: in particular parts of Africa, South America, Mexico, and Asia.