The human body has been proposed as a “superorganism” that includes bacterial and human genes (Ley 2006) where the number of microbes are as many as 10-fold cells and microbe genes are 100-fold that of human. Gut microbial cells have been associated with host physiology and immune homeostasis. It has been proposed that changes in the composition of microbial population, a term called dysbiosis (Hill 2010; Sartor 2008), is related to gastrointestinal diseases such as ulcerative colitis and Crohn’s disease (Sellon 1998).

Crohn's disease (CD) is a relapsing inflammatory disease that is associated with autoimmune disorders. It affects the gastrointestinal tract and symptoms often include abdominal pain, diarrhea of mucus or blood, fever, and weight loss [2]. There is currently no available treatment to cure this chronic illness, therefore long-term treatment is often used even though there are concerns [3] regarding long-term use of various drugs prescribed to manage CD [4]. When long-term CD treatment has been exhausted, fecal microbiota transplantation may be a promising rescue therapy.

Fecal microbiota transplantation (FMT)[5] is a procedure in which fecal matter is collected from a healthy donor, mixed with a saline or other solution, strained, and placed in a patient via colonoscopy, endoscopy, sigmoidoscopy, or enema. Prior to 2013, research that explored the treatment efficacy of FMT was generally limited to patients with Clostridium difficile infections (CDI) but over the last few years, FMT has increasingly become a popular inquiry among patients with inflammatory bowel diseases(IBD) other than CDI. [6] 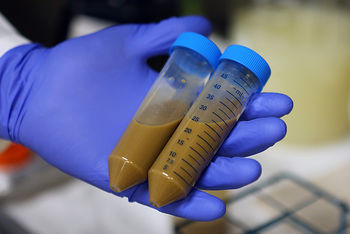 A person's therapeutic needs may change over time depending on the progress of the disease and treatment is geared toward achieving remission, maintaining remission or improving quality of life. Medications may be given orally, intravenously, subcutaneously, or topically. Medications for CD fall into five basic categories. [7]


Aminosalicylates
Aminosalicylates, given orally or applied rectally, decreases inflammation at the inner wall of the intestine and are effective in treating relapses and mild-moderate episodes of IBD. Examples of Aminosalicylates [8] includes sulfasalazine, balsalazine, melamine, and olsalazine. Some common side effects of aminosalicylates include headache, nausea, fever, rash, and reversible infertility in men.


Antibiotics
Antibiotics are antimicrobials used to treat bacterial infections. Infections of the stomach lining can be symptoms of Crohn’s disease and other IBD and are often treated with antibiotics.

Using 16 S rRNA gene-based single strand conformation polymorphism (SSCP), it was discovered that patients suffering from IBD has less diversity than healthy individuals ( Ott 2004). Although studies have revealed that IBD is associated with abnormal gut microbiota composition, it is dif- ficult to identify a general disease-associated microbiota pattern due to host-specific composition gut microbiota (Zoetndal 1998).

The first FMT for severe enterocolonic CD
A 32-year-old Chinese man developed severe enterocolonic CD where he was hospitalized in 2012 for progressive abdominal pain, bloody and purulent diarrhea and high fever of 38 °C-39.5 °C. He was diagnosed in 2010 and managed his disease through daily intravenous medicines. A CT Scan showed an abdominal mass of size 14 cm × 8 cm × 10 cm. His sigmoid colon was severely inflamed and he was given intravenous antiobiotics for 10 days but frequently experienced fever and abdominal pain; plus, the abdominal mass size was unchanged. After the patient expressed interest in a clinical trial, various tests were conducted and the donor found was his 10-year-old, healthy daughter. A week after FMT, his previous symptoms were dramatically alleviated and the size of inflamed mass was reduced. Additionally, the CDAI score was reduced to 228. He had a severe cold in the whole third week after he was discharged with clinical improvement. At one month of follow-up after FMT, his CDAI score was further reduced to 143, which met the criteria of clinical remission. To that effect, three months after FMT, the CDAI score was further reduced to 62, suggesting sustained clinical remission. His appetite improved, album total cholesterol increased to 47.5 g/L (within normal range of 35-55) and he gained 11 kg in nine months.[11]

Donor Screening
Patients can self-identify potential donor or the doctor can recommend fecal microbiota from the bacterial bank. The volunteers who had passed the selection criteria are given a laxative before defecation. Criteria for screening include: history of drug use where the donor must not have received antibiotics, laxative or diet pills, received immunomodulators[12] or chemotherapy within the last 3 months of the donations; history of diseases where infectious diseases such as diabetes, obesity, chronic diarrhea, constipation, colorectal, IBS, IBD, colorectal polyps, caner, allergy, metabolic syndrome and chronic fatigue syndrome would disqualify a person from donating; and stool testing for parasites. [13]

Patient preparation
Conventional treatment of CD (steroid,immunomodulator, biotherapy and TCM) is stopped one week prior to FMT. Disease duration, disease localization, disease behavior, treatment and surgical history, body weight, and Harvey–Bradshaw Index (HBI) are assessed. Peripheral blood is collected for chemical and biological analyses. Daily doses of 3g mesalazine[14] is given to patient.

11. For endoscopic procedure, 150-200 mL liquid suspension of approximately 1 part cal flora and 2 parts normal saline is transplanted into patient;s mid-gut through table in the gastroscope under anesthesia
[15]


FMT-Related Factors
Genetic background or close contact with recipients did not significantly affect the outcome of patients’ clinical response at six months after FMT. The efficacy of using fresh fecal microbiota seemed higher than that using frozen fecal microbiota, but the difference on the clinical improvement or clinical remission was not significant. There were no differences in patients’ clinical response between the two age groups of donors over 14 and under 14 years of age. [16]