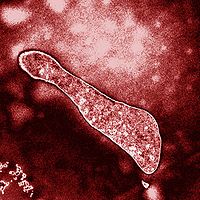 * Multiple strains of this organism have been isolated since its discovery (YT, Y-2 etc). Majority of the information on this page are for the strain YT unless otherwise specifically mentioned.

Ferroplasma acidiphilum is a species of an iron-oxidizing, acidophilic, chemolithoautotrophic archaea. It is non-motile as it lacks flagella [1].It lives in a metal-heavy environment containing high levels of iron and sulfur at a very acidic pH. It has been categorized as an extremophile as it grows optimally at a pH of 1.7. It was first isolated from a bioreactor pilot plant in Tula, Russia [1]. The bioreactor was used to leach gold from pyrite-ore, a chemical reaction that F. acidiphilum plays a role in. It is part of the order Thermoplasmata that contains other acidophilic genera including Picrophilus and Thermoplasma. F. acidiphilum and its sister species F. acidarmanus play a large role in geochemical cycling of iron and sulfur in very acidic, metal-heavy habitats both natural and man-made [1]. It has been found that some of its intracellular enzymes function optimally at pH levels as low as 1.7, much lower than what the actual cytoplasmic pH level of 5.6 [2]. Another recent discovery has found that F. acidiphilum is dominated by iron-centered proteins with the iron suspected to act as 'iron rivets' (detailed under Metabolism section). While the low pH cytoplasm and the iron supported protein structures could be the potential reason for its low pH tolerance, these discoveries have led to research aimed at determining how this "pH anomaly" exists and whether the 'iron rivet' protein is an ancient mechanisms possibly evolved in early earth life [3].

F. acidiphilum has not had its genome sequenced as of yet, but some DNA studies have been performed that have allowed for phylogenetic analysis. Characterization of F. acidiphilum has placed it in a new family (Ferroplasmaceae) and genus (Ferroplasma) (Figure 2). The new family was justified because of its >10% difference in 16S rRNA sequence from its closest relatives in the families Thermoplasmaceae and Picrophilaceae of which it only shares 87.2 and 89.9% similarity respectively [1] . It was also distinct because unlike other members of the order Thermoplasmales, it lacks any form of a cell wall [1] . A new species of acidophilic iron-oxidizing archaea, Ferroplasma acidarmanus, has more recently been discovered giving a total of two species within the genus Ferroplasma [4]. Two strains of F. acidiphilum (YT and Y-2) have been characterized. Both have approximately 35 mol % G+C content in their genome. Restriction Fragment Length Polymorphism (RFLP) analysis has shown the genome structure to be very stable, even under varying growth conditions for long periods of time when altering energy source, pH, and concentration of zinc ions [5]. A genome expression library for "F. acidiphilum" has been established in E. coli using a phage vector. Using this technique it was determined that this species has a novel α-glucosidase [6]. 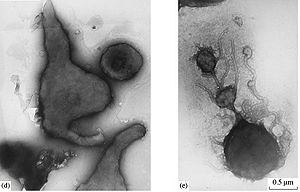 F. acidiphilum cells can come in a variety of forms depending on environmental conditions and growth stage [1,2] (Figure 3). At the beginning of the exponential growth phase cells have irregular round shapes. As growth continues cells can take on other unusual shapes, including a vibrio-like form. Cells in the stationary phase are pleomorphic and assume irregular shapes [2]. Cells also take on irregular shapes when budding (Figure 3). Because of the large number of forms a F. acidiphilum cell can take, cell sizes vary greatly but typically have a diameter of 0.3-3μm [6].

All cells in the Ferroplasma genus lack cell walls [6]. Under acidic conditions the ether-linked membrane lipids of archaea are more resistant to acid hydrolysis than the ester-linked membrane lipids of bacteria and eukaryotes. F. acidiphilum membranes are mainly composed of unique tetraether lipids that form a monolayer giving the membrane more stability. One of the main constituents of the membrane, β-D-glucopyranosylcaldarchaetidylglycerol, comprises 55% of the membrane and contains cyclopentane rings, giving the membrane more rigidity [7] (Figure 4). The membrane composition of F. acidiphilum and other acidophilic archaea cells create large proton gradients due to their low proton permeability, allowing the cells to survive at very acidic pH levels. Membrane proteins of this species function optimally up to 3 pH levels below the mean cytoplasmic pH of 5 [8].

F. acidiphilum utilizes iron via assimilatory and dissimilatory mechanisms. Though iron is the 4th abundant element in the Earth's crust and is crucial to living cells, it is often a limiting nutrient being low in solubility and poor bioavailability [9]. An exception to this are the iron-rich acidic environments like the ones habited by F. acidiphilum. Interestingly F. acidiphilum has been found to have iron-protein dominated cellular machinery while such similar iron-proteins have not been found in other organisms living in similar environments. 86% of the investigated 189 cellular proteins of F. acidiphillum are found to be iron proteins [9] with the iron acting as 'iron rivets' to stabilize the three dimensional structures of these proteins. These discoveries lead to an intriguing possibility of it being evolved entirely within the iron rich habitat with its metalloproteins being a living representation of early cellular life.

F. acidiphilum strain YT obtains energy for life by oxidation of ferrous iron availabed as pyrite (FeS2) or Ferrous Sulfate (FeSO4) [1]. It is also capable of using Mn2+ supplied as MnSO4 in culture, but did not yield biomass equivalent to when oxidizing Fe2+. It uses oxygen as its terminal electron acceptor. It obtains its carbon from carbondioxide (inorganic) and is also capable of utilizing carbon from yeast extracts (organic) under laboratory conditions [4]. Thus it could be appropriately termed as a chemolithoautotroph with mixotrophic abilities. It grow at a temperature range of 15-45 ˚C and pH range of 1.3 to 2.2. The optimal temperature for growth is 35-36˚C and the optimal pH is 1.7. With its ability to oxidize iron, F. acidiphilum plays a role in the global geochemical iron cycle (Figure 5). 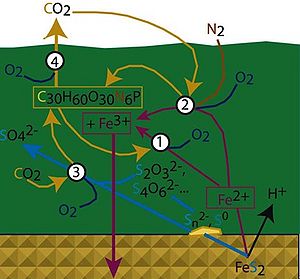 Figure 5. Potential iron, sulfur and carbon cycle in an Acid Mine Drainage. Source: Baker and Banfield 2003

Ferroplasma spp. have been isolated across the world from heavy metal dominated/containing bioreactors or acid mine drainage (AMD) systems [1]. These habitats are characterized by high metal concentrations (inorganic electron donors and acceptors), high pH that dissolve these inorganic compounds, medium to high temperatures and with some locations receiving sunlight. An AMD in particular has many microbial niches that vary in pH, temperature and ionic strength. However the nutrient limitation of an AMD allows only certain groups of organisms to grow, like photolithotrophs capable of oxidizing Fe2+ and S-, organoheterotrophs, lithoheterotrophs and anaerobes that reduce Fe3+ [10].

Steps in a potential iron, sulfur and carbon cycle in an AMD is shown in figure 5 [10].In an AMD, organisms that aerobically oxidize ferrous ion (with or without nitrogen and CO2 fixation), organisms that oxidize FeS2 to SO4- and those that oxidize organic carbon to CO2 coexists at different temperature ranges playing a role in the geochemical cycling of nutrients in the AMD (Figure 4). In the temperature range of growth of F. acidiphilum (mesophilic), Ferroplasma spp. aerobically oxidize ferrous ion to ferric ion (Figure 5 - step marked as 1). Organisms from the Leptospirillium spp. could also be involved in iron oxidation along with nitrogen and carbon fixation (Figure 5 -step marked as 2). Organisms of the Sulfobacillus spp. could be potentially involved in sulfur oxidation(Figure 5 -step marked as 3), while some eukaryotic organisms could be involved in the oxidation of organic carbon (Figure 5 -step marked as 4).

F. acidiphilum has not been shown to be pathogenic and its pathogenicity is irrelevant at present.