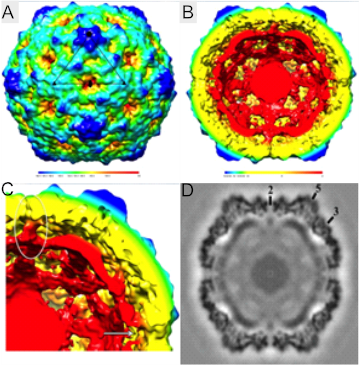 Figure: CAR-catalyzed CVB3 A-particle. (A) CVB3 A-particle is shown surface rendered and colored according to radial height (key beneath map). An asymmetric unit is outlined in black. (B) Cutaway view of the A-particle showing capsid separation from genomic RNA and structural changes that result from the 5% expansion of the capsid. (C) Close-up showing the columns of density connecting the RNA core to the capsid shell (white oval) and the open pores that formed at the 2-fold axes (white arrow). (D) Central section of CAR transitioned A-particle of CVB3 with symmetry axes labeled. Taken from Organtini, L.J., Makhov, A.M., Conway, J.F., Hafenstein, S. and Carson, S.D. 2014, with permission (66).

This file contains additional information, probably added from the digital camera or scanner used to create or digitize it. If the file has been modified from its original state, some details may not fully reflect the modified file.
Retrieved from "https://microbewiki.kenyon.edu/index.php?title=File:Coxsackievirus_Type_B_Structure.png&oldid=132452"