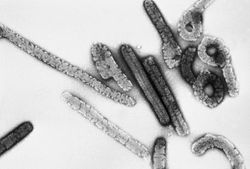 Caption at source claims that this image is “Magnified approximately 100,000x”, though it seems to me that such a claim of an absolute magnification is rather meaningless when an image is displayed on a computer screen in a size and at a resolution that can vary greatly.  For this reason, I do not make any such statement about the magnification of amy of my own photomicrographs wherever I post them, preferring, instead, to provide some information that can be used to establish the scale of the objects depicted therein independently of the size at which that image might ever be displayed or printed.