Difference between revisions of "Flaviviridae" 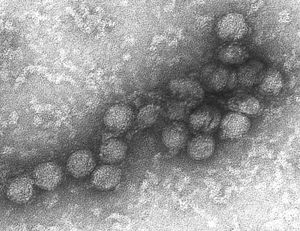 Flaviviridae contains a myriad of viruses that cause disease in humans. Flaviviridae has a total of 69 pathogens in its rank. The family gets its name from Yellow Fever virus, a type virus of Flaviviridae; flavus means yellow in Latin.

The genome of Flaviviridae is not segmented and contains a single molecule of linear positive-sense, single-stranded RNA. The complete genome is 9500-12500 nucleotides long. The 5'-end of the genome has a methylated nucleotide cap, or genome-linked protein (VPg). The 3'- terminus has no poly (A) tract but the poly (A) tract is present in some strains of tick-born encephalitis complex of flaviviruses. (source: ICTV dB Descriptions)

Virion Structure of a Flaviviridae

The virions of flaviviridae consist of an envelope and a nucleocapsid. The virus capsid is enveloped. The virions ar spherical to pleomorphic and measures 40-60 nm in diameter. There are small spikes surrounded by a prominent fringe that make up the surface projections. The capsid is round and exhibits a polyhedral symmetry. The core is isometric and has a diameter of 25-30 nm. The capsids can be penetrated by stain and some appear dark in the center. (source: ICTV dB Descriptions)

Reproduction Cycle of a Flaviviridae in a Host Cell

During the replication process, the entire flavivirus genomes is translated as a single polyprotein which is then cleaved into the mature proteins. The complementary (-)strand RNA is synthesized by NS proteins and used as a template for genomic progeny RNA synthesis. Assembly occurs during budding, characteristically into cytoplasmic vacuoles rather than at the cell surface. The release of the virus occurs during cell lyses. (source: Microbiology@Leicester: Flaviviruses)

Many species of Flaviviridae can replicate in both mammalian and insect cells. They can survive for long periods in hosts such as ticks by replicating in this host without damage to the insect.

Flaviviridae viruses produce a wide range of diseases including fever, arthralgia, rash, haemorrhagic fever and encephalitis. The outcome of infection is influenced by both the virus and a number of host-specific factors like age, sex, genetic susceptibility and preexposure to same or related agent. (source: Microbiology@Leicester: Flaviviruses)