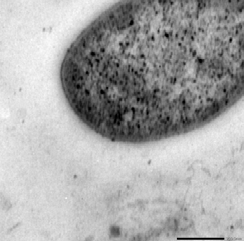 Flavobacterium is a genus of bacteria into which F. marinum is classified. Rod shaped, non-motile, gram negative are attributes characteristic of this genus. F. marinum's phylogenetic relationship to others within the genus was determined by a 16S rRNA gene sequence. Coincidentally, F. marinum strain SW105 showed the most genetic congruencies with Flavobacterium ceti, and Flavobacterium ummariense.