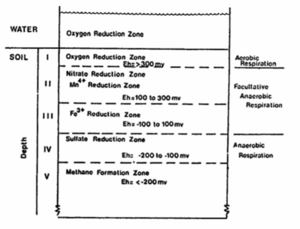 Flooded soils are dynamic ecosystems that play an important role in biogeochemical cycling and in the production of greenhouse gases. Methane (CH4) and nitrous oxide (N2O) are produced as byproducts of anaerobic metabolism in the low-redox zones characteristic of flooded soils, where oxygen is lacking. Carbon dioxide (CO2), which receives widespread attention as a greenhouse gas and potential source of global warming, may also be produced at the interface of anaerobic-aerobic zones through the consumption of methane gas. However, it should be noted that from a global standpoint methane and nitrous oxide on a per molecule basis have the potential to contribute 25x and 300x more to global warming over the next century than carbon dioxide, respectively (Schlesinger, 1998). According to Matthews and Fung (1987), an estimated 3.6% of terrestrial land is classified as wetlands, and although this number continues to decline (Schlesinger, 1998) the effect of flooded soils to the global climate is clear.

Methane production occurs exclusively in anaerobic conditions by a group of Archaea known as methanogens. These microbes are obligatory, and require extremely low redox conditions in the range of -100mV (see electron tower theory, section 2.1.1) (Sylvia, 2005). If oxygen is introduced into the system, methanogenesis ceases; thus, the process of methanogenesis depends on saturated soil conditions and the presence and level of the water table.

Methanogenesis can occur via two pathways: either by 1) CO2 reduction or by 2) acetate fermentation.

Because the process of methanogenesis is “fed” byproducts produced from a complex series of degradation processes which are themselves “fed” complex organic matter, rates of methane production are highly sensitive to changes in temperature. Methanogenesis has a Q10 value in the range of 30-40, which is substantially higher than most biochemical process (Sylvia, 1998).

Despite the clear effect of increasing temperatures on the rate of methanogenesis, the actual impact of global warming on methane production rates in wetlands and permafrost regions is highly unpredictable. Because methanogenesis requires anoxic conditions, any drying of flooded soil environments would both decrease methane production and increase methane oxidation, reducing overall methane emissions. Alternatively, warmer climates could increase growing seasons, which would increase methane emissions. Many questions remain unanswered.