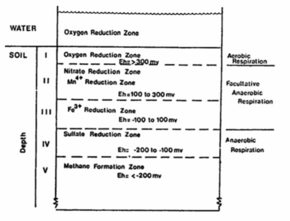 Microbial transformations of elements in anaerobic soils play a large role in biogeochemical cycling of nutrients and in greenhouse gas emissions. Changes in the oxidation state of terminal electron acceptors may result in nutrient loss from the system via volatilization or leaching. Anaerobic microbial processes including denitrification, sulfate reduction, and methanogenesis are responsible for releasing potent greenhouse gases (NO, N2O, H2S, and CH4) into the atmosphere (Schlesinger, 1996).

When a soil is flooded, the exchange of atmospheric gases with the soil is severly limited and aerobic organmisms consume all the remaining oxygen. Soon organisms that thrive in anoxic conditions will begin to thrive using alternative electron acceptors. Insects and small burrowing mammals will have to extrude to the surface to avoid drowning.

Flood duration effects on the soybean plant were manifested in yellowing and abscission of leaves at the lower nodes, stunting, and reduced dry weight and seed yield. Canopy height and dry weight decreased linearly with duration of the flood at both growth stages. The growth rates were 25 to 35% less when soybean was flooded (3)

In anaerobic respiration oxygen is replaced by other compounds as TEA (terminal electron acceptors). Iron is reduced from Fe3+ to Fe2+ during iron repiration. Manganese is also reduced. These processes occur because of microoganism activity. Energy yields are lower than for aerobic respiration The electron tower is used to determine amount of energy available from any pair of redox reactions.(1) Since oxygen is at the bottom of the electron tower(see above), it will yield the most energy when used as a TEA. In flooded anaerobic conditions, microorganisms will have to use other lower energy yielding compounds. As the available oxygen drops organisms that thrive under anoxic conditions begin to grow using alternative electron acceptors. The order in which these available elctron acceptors is consumed can be partially predicted by the electron tower. Changes in the oxidation-reduction status over time reflect the activities of a succession of microorganisms able to use these alternative electron acceptors. Reduction of ferric iron by some strains of mesophilic heterotrophic acidophiles has been found to be more rapid and extensive when the bacteria are grown under aerobic conditions than when they are grown under anaerobic conditions (2).