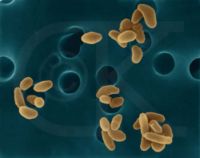 Francisella tularensis is a highly contagious bacteria that causes tularemia, or "rabbit fever" that is contagious to humans. There are two strands of Francisella tularensis that are most studied: the more virulent Type A strain (found in North America), and the less virulent Type B strain (found in Europe). The bacteria was used in development of biological weapons in the World War II and post WWII years, and is considered as a very dangerous bioloterror threat today.

Contains AcpA, which is a repiratory, burst-inhibiting acid phosphatase

Francisella tularensis infects small mammals such as rabbit and rodents with the disease tularemia. Francisella tularensis can also infect human through contact with infected animals or vectors such as fleas and mosquitos. It can also be spread to humans by being in their water or food supply (It can survive for along time in animal carcasses).

The F. tularensis is a highly contagious bacteria that can be spread from animals to humans, through vectors such as mosquitos and fleas, or from being breathed in from the air. It primarily infects macrophages of the host organism after it is ingested by phagocytosis. F. tularensis multiply inside the macrophage and later break out the macrophage and invades other cells. No proven vaccine has been created for tularemia, and the general treatment for the disease is antibiotics.

Some symptoms of tularemia are fever, ulcers, dyspnea, and others (depending on what part of the body is affected).

The effects of the biological weapon are severe respiratory illness including pneumonia and systemic infection that if not treated, can result in death.

1. This research deals with the genetic manipulation of Francisella tularensis . This bacteria is a "category A bioterror pathogen" that can cause fatal human infection, however, very few virulence factors are known in this species due to lack of tools for genetic manipulation and difficulty working with it. In this research, a vector that can replicate in E. Coli and F. tularensis is created that allows the research of the bacteria by identifying the promoters that are activated during intracellular growth and survival of the bacteria.

3. This research attempts to identify F. tularensis mutants that can be useful in the developmental of a vaccine for tularemia in humans and other animals. F novicida transposon mutants are screened to identify mutants that showed reduced growth in mouse microphages. Results yielded 16 F. novicida mutants that were "100-fold more attenuated for virulence in a mouse model than the wild0type parental strain". The mutants are then tested for their ability to protect the mice against high doses of wild type strains. 5 of the 16 mutants exhibit protection for the mice. This is believed to be valuable in designing a vaccine against tularemia.

Edited by Dan Su of Rachel Larsen and Kit Pogliano