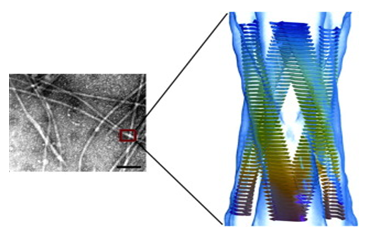 Functional amyloid are insoluble proteinaceous fibres which function in normal physiological processes in prions, fungi, and bacteria[3]. Until the past decade, amyloid production was only defined as pathogenic due to improperly folded protein aggregates and was associated with amyloidosis and chronic neurodegenerative diseases, such as Alzeihmer's[3] or Parkinson's disease[9]. However, in gram positive and gram negative bacteria, these highly organized structures have nonhuman pathogenic properties crucial to reproduction regulation, biofilm production, and virulence[5]. 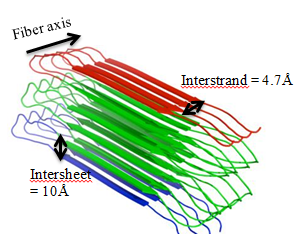 Amyloids have distinct unbranched protein fibers composed of β-sheet quaternary structures[3]. Thousands of highly arranged peptide or protein repeats consisting of β-strands that are oriented perpendicular to the fiber axis form what is known as a cross-β pattern, with diameters of 6-12 nanometers wide and 0.1-10 micrometers long[3]. These peptide strands appear to be “stacked” in either parallel or antiparallel directions[3]. X-ray fibre diffraction demonstrates that the interstrand and intersheet stacking distances of the cross-β core are 4.7Å and 10Å, respectively[7].

Amyloid fibrils are stabilized by non-covalent intermolecular interactions, such as non-polar Van der Waals and aromatic stacking, or hydrogen bonds[4]. Individual β-strands interact with adjacent sheets by two classes of β-sheet stacking interfaces called the dry or wet interfaces[4]. In the dry interface, the highly packed side chains interlink due to steric forces caused by close proximately and structural similarity[4]. This is termed the steric zipper[4]. In wet interfaces, hydrogen bonds exist between side chains[4].

Sequence conservation is limited between the amyloid domains of different protein. However, some shared characteristics are hydrophobic-rich sequences and the presence of glutamine and asparagine polypeptides[3]. This structure gives amyloid its resistant characteristic to environmental attacks, such as proteolysis, and inability to bind to certain dyes[9].

A prime model of the regulatory role in amyloid fibrils are eight hydrophobic chaplin proteins (ChpA, B, C, D, E, F, G, H) identified in gram positive soil-dwelling Streptomyces coelicolor[3]. Chaplin proteins have a rich β-sheet secondary structure and form cross-β amyloid fibrils with a diameter of 4-6 nanometers[1]. Chaplin proteins self-assemble into amyloid fibers which can be categorized into long proteins and short proteins[8]. ChpA, B, C are long proteins and have two hydrophilic N-terminal chaplin domains and a LAXTG sequence at its C-terminal tail[1]. The sorting signal sequence ensures covalent attachment to S. coelicolor peptidoglycan of aerial hyphae by sortase enzymes[1].

Analogous to fungi, S. coelicolor grows in filamentous colonies after spore germination by producing mycelium, a network of vegetative hyphae in search of nutrients[3]. During this growth phase, genes chpE and chpH are highly expressed[1]. These proteins diffuse out of the cell and form an insoluble layer of 4-6 nanometers wide fibrils between the air and soil interface[1]. This rigid film confers hydrophobicity and reduces the water surface tension, allowing aerial hyphae to form and penetrate the soil barrier[8].

All genes for the eight chaplin proteins are expressed in aerial hyphae and the proteins are secreted to form a layer around the emerging aerial hyphae[1]. Due to colony differentiation, cells on the colony surface give rise to reproductive aerial hyphae which emerge from the soil to septate into spores that are then dispersed by wind[3]. Aerial hyphae emerged from soil are coated with two layers: the outside layer is comprised of rodlets composed of paired chaplin fibrils and the inner layer contains all eight chaplin proteins[1]. This coating makes the surface of aerial hyphae hydrophobic, whereas the surface of submerged hyphae is hydrophilic[1]. The change to hydrophobicity prevents the aerial hyphae from growing back into the aqueous substrate and facilities dispersion of spores[1]. Through this mechanism in S. coelicolor, it is evident that amyloid proteins are crucial in biological processes such as formation of reproductive hyphae. 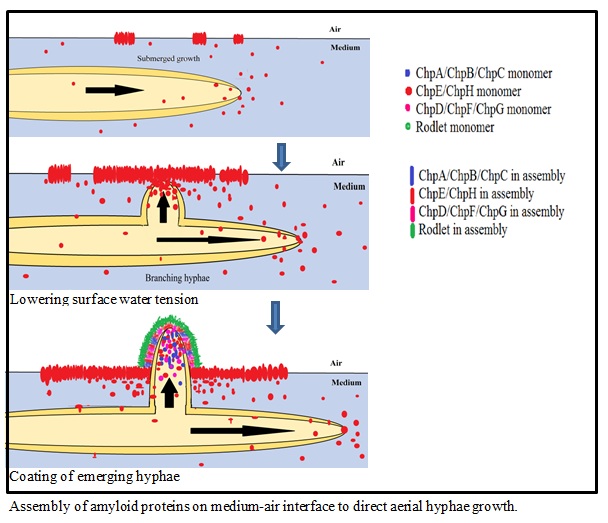 Biofilms formation is advantageous for a community of bacteria to adhere to medium or host surfaces and to protect from chemicals or antibiotics. A widespread of bacteria have the property to induce biofilm formation, some of which involve amyloids. These include representatives from the phyla Proteobacteria (Alpha-, Beta-, Gamma-, and Deltaproteobacteria), Bacteriodetes, Chloroflexi, Actinobacteria[5].

Although curli in Escherichia coli has been extensively studied, a recently researched amyloid protein associated with TasA protein in gram positive Bacillus subtilis[6] reveals novel information of the biofilm mechanism. The gene operon encodes three proteins which regulate biofilm formation in the following sequential order: sipW, tapA, and tasA[6]. Biofilm in B. subtilis is mainly comprised of polysaccharide and TasA, which form a network of 10-15 nanometer wide extracellular amyloid fibre appendages that surround the cell surface[6]. TasA serves as a backbone to provide structural support and cohesion to the more flexible extracellular polymeric substance[2].

TapA protein directs TasA amyloid fibre assembly and disassembly[2]. TapA is localized on peptidoglycan and extracellular TasA elongates on this structure[2]. However, it has been suggested that the sole interaction of TapA and TasA do not regulate disassembly, rather the high concentrations of D-amino acids (D-tyrosine, D-leucine, D-methionine, and D-tryptophan) and interactions with the peptidoglycan cause TasA amyloid fibres to be released from cells[2]. Although biofilm formation may be directed by other proteins in different organisms, the example of B. subtilis demonstrates the importance of integral amyloid fibres. 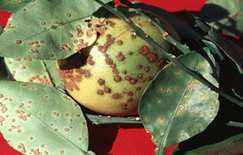 Invasion of Xanthomonas campestris pv. citri as visible by spots on green apple and leaves. http://www.invasive.org/images/384x256/1262012.jpg.

In gram negative Xanthomonas species, the hairpin structure composed of HpaG protein polymerization are secreted as virulence factors and induce the hypersensitive response in plants[5]. The hypersensitive response in plants is a defense mechanism in which infected cells undergo mediated cell death to prevent the spread of an intracellular pathogen[10]. The activation of hypersensitive response by hairpins is unknown, but experimental results demonstrate an increase in cation permeability during the interaction of hairpins with plant cell walls[10]. This suggests that the mechanism is caused by the disruption of the membrane[10]. The ability for parasitic bacteria to utilize amyloid fibrins as toxic substances is advantageous and crucial for its survival in plant hosts. 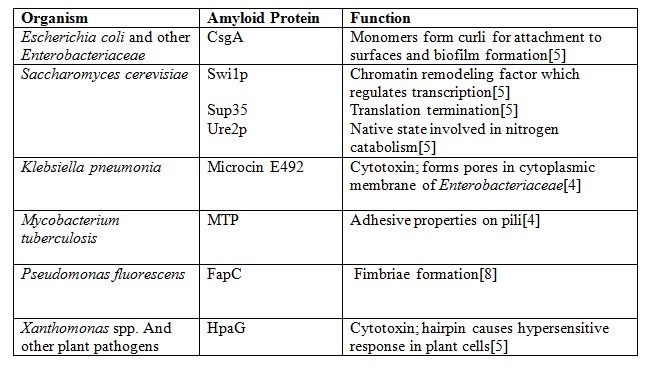