Difference between revisions of "Fungiculture"

Fungiculture is the cultivation and production of edible and medicinal mushrooms. Mushrooms are the sporophores, or fruiting bodies, of filamentous fungi. Mushrooms are a nutritious food and an economically important commodity, extensively cultivated on a global scale. Mushroom production benefits from an understanding of a variety of habitat constraints and microbial interactions, upon which the success or failure of their cultivation depends. Although mushrooms themselves are macroscopic, their production is based on the manipulation of microbial habitat, community composition, or both, in the presence of the spores or mycelium of a desired fungal species, in order to create conditions favoring mycelial growth and mushroom formation. Along with fermentation and composting, fungiculture should be considered one of the first microbial biotechnologies.

All the cultivated mushrooms belong to the phylum Basidiomycota, and are all saprophytes. For the purposes of production, mushrooms can be roughly divided into two groups: primary and secondary decomposers. Though the boundary between the two groups is not absolute, the two groups of mushrooms require distinct cultivation techniques, and will be discussed separately. Some mushroom species are able to occupy different niches depending on environmental conditions (Stamets 2005).

The wood-decay fungi are divided, in turn, into two groups: brown-rot, which degrade cellulose and hemicellulose, and white-rot, which degrade lignin, as well as cellulose and hemicellulose. The white-rot fungi, in particular, play a crucial role in the global carbon cycle, by virtue of their ability to decompose large, complex lignin molecules, which constitute the most recalcitrant form of carbon found in plant material. Biodegradation of lignin is not thoroughly understood, but some of the more well-researched metabolic pathways involve the lignolytic enzymes manganese peroxidase, lignin peroxidase, and cellobiose dehydrogenase (Hattaka 1994).

It is the activity of these fungi that releases the nutrients and energy stored in the structural elements of plants, which get their strength and rigidity from an abundance of lignin, into a form usable by other organisms. Most of the wood-decaying fungi under cultivation are white-rot fungi, including the above-mentioned L. edodes, Pleurotus spp, and G. frondosa. Mushroom growers exploit the ability of fungi to digest substances that many organisms cannot, by pairing mushroom crops with semi-selective substrates that are nutritionally inaccessible to potential competitors (Stamets 2000).

Substrates for the production of these mushrooms generally consist of dried, shredded, plant material, with very low nitrogen content. The C:N ratio in the wastes preferred by L. edodes and P. ostreatus range from 350:1 to 500:1, though the N content of these substrates is frequently supplemented with mineral fertilizer or high-N materials, such as rice bran (Chang & Miles, 2004). The most common material used for the production of wood-decaying fungi is sawdust, but techniques for growing nominally wood-decaying fungi on grasses are well-established for some mushroom crops. The shredding or pulverizing of the substrate material facilitates the ramification of the fungal mycelium throughout the substrate. This is significant for mushroom producers for several reasons. The speed of colonization, together with other factors, controls the time necessary to produce a crop, and the amount of substrate accessed by the mycelium controls the yield per unit. A fine, granular substrate structure, which permits faster and easier ramification, consolidation, and breakdown, by fungal mycelia, will produce higher yields, sooner, than bulkier substrates.

The preference of primary decomposer wood-decay fungi for the relatively microbially simple environment found within undecayed wood, means that these fungi can be very vulnerable to microbial competition, when present. This makes manipulation of the microbial environment fairly straight-forward for mushroom growers - in theory. Most commercial cultivation involves sterilization of the substrate, prior to inoculation with the desired species.

In practice, fungi growing in sterilized substrates are vulnerable to contamination by other fungal or bacterial organisms. The oligomers resulting from the breakdown of lignin and cellulose by fungi are a viable source of nutrition for a wide range of bacteria as well - and fungi grown in sterile environments are less resilient to the presence of bacteria than they are in their natural habitat. In the wild, fungal-bacterial interactions range from competitive to mutualistic (de Boer 2008). In contrast, in the cultivation of primary decomposers, the presence of any other fungal or bacterial organism in a given container of mushroom substrate is usually regarded as a total loss of that container’s production.

Secondary decomposer fungi rely on the metabolic products and by-products of fungal, bacterial, and other primary decomposers. Living in soil or rotting wood, they prefer environments that are more biologically complex than the primary decomposers, and are cultivated on specialized composts. Commonly cultivated secondary-decomposer fungi include the common button mushroom (Agaricus bisporus), largely in temperate areas, and the paddy straw mushroom (Volvariella volvaceae), in the tropics. 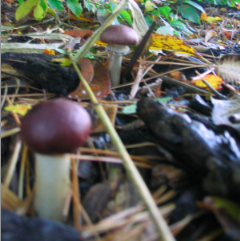 Stropharia rugosoannulata in its natural habitat in the forest understory. By Rafter Sass Ferguson.

The niches of primary and secondary decomposition are not perfectly discrete. Despite their ecological role as primary decomposers, oyster mushrooms can be cultivated in the style of secondary decomposers, on composted substrates (Vajna 2010). The litter-decomposing fungi naturally occupy a niche that combines elements of both primary and secondary decomposition. S. rugosoannulata is a primary decomposer, and can digest a variety of fresh coarse lignocellulosic debris. But as a litter decomposer, it occupies zones of high biological complexity on the forest floor, and thrives in the presence of bacteria (Stamets 2005). This resilience creates the opportunity for a naturalistic style of cultivation of this mushroom that is difficult to achieve with other mushrooms. 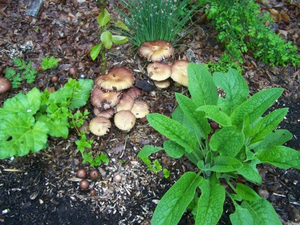 Secondary decomposers are grown in composted substrates that have already undergone a significant amount of decomposition. Mushroom composts are produced with specialized rapid composting techniques, utilizing straw and manures (for A. bisporus) and many other combinations of agricultural residues and plant wastes for other mushroom species. These composts have a much higher proportion of nitrogen than the substrates preferred by the primary decomposers. Optima for C:N range from 17:1, in the case of the common white button mushroom, Agaricus bisporus, to 80:1, for the paddy straw mushroom, V. volvacea (Chang & Miles, 2004).

Unlike the primary decomposers, cultivating secondary decomposer fungi involves a sophisticated manipulation (rather than simple suppression) of microbial activity. Like other composts, mushroom composts undergo a successional process, as the activity of bacteria and non-cropping fungi alter the eco-physiological parameters of the compost pile environment, especially temperature, available nutrients, and pH. These eco-physiological parameters trigger changes in community composition. The mushroom compost production process, however, is unusually tightly controlled, and therefore quite rapid - usually taking place over three weeks. Like other composts, mushroom composts contain a wide spectrum of microbial diversity, passing through initial mesophile-dominanted communities, to thermophilic, and then back to (new) mesophilic commmunities in the mature compost. Thermoactinomyces species of thermophilic actinomycetes, which along with Thermobifida fusca are associated with occupational respiratory illness, have been shown to be common in mushroom composts (Song et al. 2001). Contrary to expectations about the metabolic activity in mature composts, finished mushroom composts have demonstrated the abundance of a consortium of supposedly cellulose-degrading bacteria, related to Pseudoxanthomonas, Thermobifida, and Thermomonospora (Székely et al., 2009). Secondary decomposers prefer much more biologically complex environments. They not only tolerate the presence of bacteria, but have been shown to draw on both dead and living bacterial biomass as a nutrient source (Barron 1988, Fermor 1991). This ability to degrade living bacterial biomass has generated an interest in the use of mushroom mycelium to filter agricultural run-off, in order to reduce the presence of E. coli and colliform bacteria, an emerging technique dubbed "mycofiltration" (Stamets 2005).

Adaptiveness to biologically complex environments notwithstanding, secondary decomposers are still vulnerable to microbial competition. Trichoderma spp., particularly T. harzianum and T. aggressivum, are the most notorious fungal competitors in production of Agaricus and other mushrooms (Savoie & Mata, 2003). The bacterial pathogen Pseudomonas tolaasii causes a condition called “bacterial blotch,” resulting in discoloration of mushroom caps, and reduction or loss of production value. (Stamets & Chilton, 1983).

There is a robust body of research centering on the application of molecular tools to the investigation of succession during the formation of mushroom compost. Recently, B. Vajna, et al. (2010) investigated successional changes in microbial community structure during compost preparation, using 16S ribosomal deoxyribonucleic acid-based terminal restriction fragment length polymorphism. They found that mature composts yielded the lowest variance, supporting the role of standardized preparation protocols for mushroom composts. Researchers have also focused on the role of specific organisms in compost formation, and their effect on yield. M.M. Coello-Castillo et al. (2010) evaluated the effect of pre-colonization by Scytalidium thermophilum, a thermophilic fungus known to positively affect Agaricus bisporus production, a on the yield of brown (Portabello)strains of A. bisporus.

Research also focuses on antagonistic and pathogenic interactions between mushroom crops and other microbes. ML Largeteau and JM Savoie (2010) recently offered a review of the biochemical mechanisms of host-pathogen interactions between A. bisporus and Burkholderia gladioli (the cause of cavity disease), as well as the microbial agents of other severe diseases in Agaricus production: the bacteria Pseudomonas tolaasii, Pseudomonas reactans, and the fungi Trichoderma aggressivum and Lecanicillium fungicola.

Edited by Rafter Sass Ferguson, a student of Angela Kent at the University of Illinois at Urbana-Champaign.