A Microbial Biorealm page on the genus Fusarium graminearum

F. graminearum is commonly found on cereal grains, most commonly on wheat and barley. On wheat, the spores germinate on the kernel and grow down the stalk. Fruiting structures penetrate through the wheat's stomates. The kernels will appear visually "scabby". Any or all part of the head may appear bleached white, which is diagnostic for the disease in wheat (McMullen et al, 2008.) On corn, growth is seen as white-to-pink colored mold on scattered kernels.

Fusarium damaged kernels can be seen on wheat, rye and triticale, where they appear shrunken and chalky white in color.

Fusarium graminearum, has major economic impacts in the agriculture industry. Production losses worldwide have been estimated to be as much as 50%. Damage due to scab in the United States was estimated to be more than US$1 billion in 1993 and US$500 million in 1994 (Gilchrist and Dubin, 2002.)

The genome of F. graminearum is made up of an assembly of plasmid, fosmid, and bacterial artificail chromosome, totaling 36.1 Mb and displaying high sequence quality and continuity. It is predicted that the genome contains a set of 11,640 genes and four chromosomes. (Cuomo et al, 2007)

Certain regions of the chromosomes have been found to have high levels of polymorphisms and high levels of recomination between strains of the species. An interesting feature of this observation is that genes that are specifically expressed during plant infection are all over-represented in high density single nucleotide polymorphic regions. The genome appears to have very few repetative sequences with fewer high-identity duplicates. It has been speculated that this is the result of repeat-induced point mutations.

Fusarium graminearum possess a distinctive “banana-shaped,” macroconidia. These conidia contain multiple septa and often have a “foot cell.” Once conditions are favorable, these conidia produce ascospores to promote its dispersal. (Goswami 516)

Fusarium graminearum uses glucose as a carbon source for energy and undergoes aerobic respiration. The heterogeneous composition of the cell wall is particularly important for the pathogenicity of F. graminearum, as it contains multiple accessory proteins for electron transport as well as chitinase, and important enzyme for the degradation of chitin. (Shi et al. 371)

The myotoxins, which include culmorin, trichothecene deoxynivalenol, and zearalenone produced by F. Graminearum as secondary metabolites, is what causes its pathogenicity.

F. Graminearum infected grains have been discovered in a broad range of environments. This includes wheat and barley in North America, Asia, Canada, Europe, and South America. It has inhabited both temperate and semitropical regions. (Goswami 515) The most favorable conditions for infection are prolonged periods (48 to 72 hours) of high humidity and warm temperatures (75 to 85 degrees Fahrenheit). (McMullen et al.)

Fusarium Graminearum is best known for the detrimental interactions it has with various grains. The type of grains Fusarium has infected is almost diverse as the area is inhabits, causing “scab,” on wheat, rice, oats, and maize. (Geraldo et al. 58) Regions of highest disease occurrence include the Red River Valley, the Midwest and Mid-Atlantic areas of North America, in addition to the Ottawa Valley and parts of Ontario in Canada. (Gunether 2) 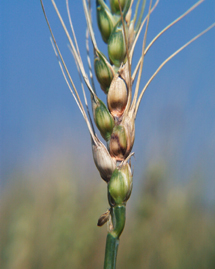 F. graminearum is best known as a plant pathogen. It causes various diseases of cereal grains, such as gibberella ear rot in corn and fusarium head blight or scab in wheat and other grains.

Some of the clinical symptoms of zearalenone in swine as reported by Trenholm et al. in 1984 include swollen or enlargedred vulva, vaginal prolapse in swine, and fertility problems. In the same study, it was reported that DON may cause decreased feed intake in swine and at very high concentrations, vomiting and feed refusal.

In humans DON has been found to be potentially immunosuppressive, and may result in kidney toxicity. Zearalenone may cause estrogenic issues in humans resulting in mild to severe reproductive effects. The FDA has set advisory levels for DON of 1ppm in finished wheat products that may potentially be consumed by humans, and 10 ppm DON on grains and grain by-products destined for ruminating beef and feedlot cattle (1993.) There have been no advisory levels set as of yet for Zearalenone.