Difference between revisions of "Gemmata"

A Microbial Biorealm page on the genus Gemmata 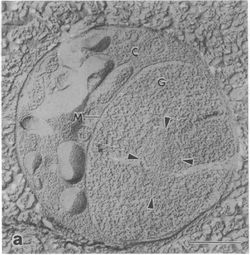 Gemmata obscuriglobus is a freshwater budding eubacterium that contains a DNA-containing region separated from the rest of the cell by two nuclear membranes.

Many genes in the Gemmata obscuriglobus genome that control functions like metabolism, biosynthesis, transport, regulation, translation, and DNA replication have been sequenced - most of these genes have been found to be homologous to genes in other bacteria. However, some genes were found to match genomic genes found in the domain Eukarya such as the integrin alpha-V and inter-alpha-trypsin inhibitor protein (Jenkins et al. 2002). 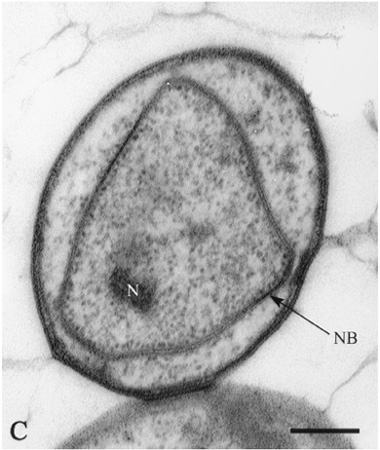 Cross-section of a Gemmata-like cell. The double-membrane-bounded nuclear body is labeled as NB and the nucleoid as N. From Wang et al.

Gemmata bacteria are aerobic chemoheterotrophs that have budding reproduction. Gemmata lack peptidoglycan in their cell walls and have crateriform structures (circular pits) on their cell surfaces (as do all planctomycetes). However, a gene homologous to a large-conductance mechanosensitive channel (MscL) gene has been identified in the Gemmata obscuriglobus genome. In Escherichia coli, "MscL forms a channel in the inner membrane that has been shown to gate in response to tension in the lipid bilayer" and is "believed to protect cells from lysis upon osmotic shock (Jenkins et al. 2002). Thus, MscL might fill an important role in stabilizing the planctomycetes in their "osmotically stressful oligotrophic environments" since they lack peptidoglycan that generally make bacterial cell walls rigid and stable (Jenkins et al. 2002).

Gemmata contain fibrillar nucleoid that is surrounded by electron-dense granules (the contents of the cytoplasm outside of the nuclear body is different and less-electron dense). Both the nucleoid and granules are enveloped by two nuclear membranes with a space between them for electron-transport. The outer of the two membranes seems to have other intracellular membranes connected to it an may be connected to the cell membrane. Both membranes have dense particles pressed to them which appear to be ribosomes - the manner in which they are arranged resembles that of ribosomes on the rough endoplasmic reticulum in eukaryotic cells. The membranes surrounding the nucleoid does not contain nuclear pores or other such characteristics of eukaryotic nuclei; thus, while the nuclear body of Gemmata resembles a eukaryotic nucleus in some minor ways, it is not the same as a eukaryotic nucleus (Fuerst et al. 1991).

Gemmata obscuriglobus, a spherical bacteria, was first isolated in a freshwater dam in Queensland, Australia. During a study analyzing the planctomycete-like diversity of a wastewater treatment plant, the samples from aerobic, anoxic, and anaerobic digestors were found to be 3.8% Gemmata (Chouari et al. 2003). As well as freshwater and wastewater plants, Gemmata and Gemmata-like bacteria have been isolated from acid bogs, swamps, and the soil.

Gemmata, like other Planctomycetale bacteria, have a polar, yeast-like cell division. During division, the cells attach their vegetative poles to surfaces with stalks or excreted substances. In budding reproduction, the mother cell is preserved and a new daughter cell is formed, unlike in binary fission where the parent cell splits into two equal daughter cells. In budding, the cell wall extends from one point instead of growing evenly throughout the cell which allows polar division. From this aggretate a motile cell is formed.

Wang, Jenny, Cheryl Jenkins, Richard I. Webb, and John A. Fuerst. 2002. "Isolation of Gemmata-like and Isophaera-like planctomycete bacteria from soil and freshwater." Applied and Environmental Microbiology, vol. 68, no. 1. American Society for Microbiology. (417-422).