Genetics of Egg Color in Chickens 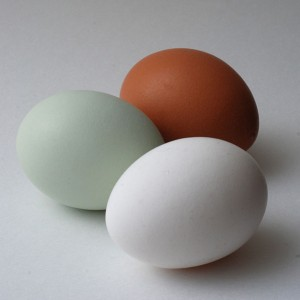 Chickens lay eggs in a variety of colors: white, brown, olive, green, blue, and many shades in between. Although shell color has not been proven to affect nutrition or taste, egg color is economically important to chicken farmers due to consumer preferences. The color of a chicken's egg depends on their genetic makeup as well as several environmental factors. Three pigments are known to be responsible for the color of chicken eggshells: protoporphyrin, biliverdin, and biliverdin-zinc chelate. White eggs tend to have very little protoporphyrin, but in brown eggs, the main pigment is protoporphyrin.[1] Blue egg color is a bit more complex. The blue egg phenotype arose only 200-500 years ago in South American Mapuche fowl. Recent research has shown that blue egg color in chickens is actually due to an ancient retrovirus that copied itself into the chicken's genome.[2]


The Genetics Behind White and Brown Eggs

Protoporphyrin is the primary pigment responsible for brown egg coloration. Traces of biliverdin and zinc chelates are also found in brown eggshells and can affect egg color.[3] White eggs have very little protoporphyrin. Thus the coloration of white and brown eggs is directly tied to the secretion and deposition of protoporphyrin. Researchers have so far identified seven genes that are involved in eggshell color: CPOX, FECH, BCRP, HRG1, FLVCR, SLCO1A2, and SLCO1C1. Careful study and research have yielded the following conclusions: 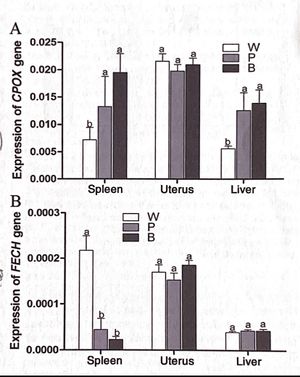 -High expressions of SLCO1A2 and SLCO1C1 are associated with brown eggshell color. [1]

Even though researchers have identified the above seven genes, the genetic control of the synthesis and deposition of brown pigment is not fully understood. There is speculation over how protoporphyrin is derived in chickens. Researchers generally ascribe to one of two views:


EAV-HP: The Endogenous Retrovirus that Led to the Blue Egg Phenotype in Chickens

The blue egg phenotype is an autosomal dominant trait that appears in American/European and Asian breeds of chickens.[4] The American/European form of the blue egg, or oocyan, phenotype arose around 200 to 500 years ago in the South American Mapuche Fowl.[2] A study conducted by David Wragg et. al identified an endogenous avian retroviral (EAV-HP) insertion in the genome of the Mapuche wild fowl and related European breeds. Polymerase chain reaction, or PCR, analysis revealed an over-expression of the SLO1B3 gene in the blue egg laying chickens’ shell glands and oviducts.[4] SLO1B3 is a gene responsible for a solute carrier involved in transporting bile salts like biliverdin. [4] Biliverdin is the primary pigment in blue eggshells. As with protoporphyrin, there is speculation over where the pigment is synthesized in chickens—in the blood or the shell gland. However, a recent study conducted by Zhao et. al concluded that the shell gland is the biosynthesis site for biliverdin. More research will be necessary to further confirm this finding. [5]

The insertion of the endogenous retrovirus enhanced the expression of the SLO1B3 gene, resulting in blue/green eggs in chickens. After analyzing the long terminal repeats of the gene, researchers were able to predict transcription binding sites and identify AhR/Ar as a potential promoter for the SLO1B3 gene. Based on analyses of jungle fowl species’ DNA and the LTR sequences in domestic chickens, researchers concluded that the insertion of the retrovirus happened following the domestication of poultry. The study also concluded that the oocyan phenotype in South American/European chickens evolved separately from the oocyan phenotype in Asian breeds of chickens. The same virus, EAV-HP, was inserted in the same general location in the chicken genome of the Asian breed but in the opposite orientation, making the presence of the blue egg trait in chickens an example of convergent evolution. [4] 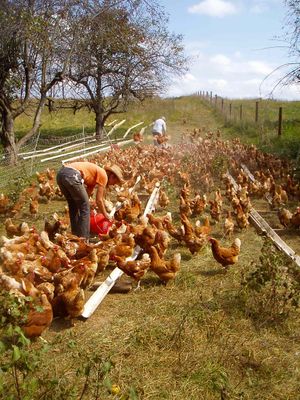 Although a hen’s genes are primarily responsible for the coloration of her eggs, there are many environmental factors that can impact the pigmentation of eggshells. Such factors include the chicken housing system, hen age, hen diet, hen stress levels, and the presence of diseases. Chickens raised for large-scale egg production are typically housed in cages or allowed to roam around as “free-range chickens.” Poultry farmers have a harder time maintaining chicken shell color in free-range flocks. However, the exact reason has yet to be studied or determined. A hen’s age can also affect the coloration of her eggs. Generally, the older the hen becomes, the less intense the pigmentation of her eggs. Again, researchers have yet to determine why this is the case. Diet can also influence eggshell color. Certain probiotics, specifically Bacillus subtilis, intensify shell color in hens laying brown eggs. Also, because iron is a chelating carrier, feed with Fe soy proteinate improves eggshell color in hens that lay brown eggs. Another element, vanadium, can be detrimental to eggshell color. For this reason, poultry feed suppliers keep vanadium levels low in chicken feed or increase Vitamin C levels to counteract the effects of vanadium. Stress from overhandling or relocation can result in delayed egg production by 3 hours and poor egg pigmentation. Molting stress, environmental disturbances, and physical stress (such as temperature changes or feather-plucking) can also lead to paler egg coloration. Certain illnesses can impact egg pigmentation. Several studies have been conducted on the effects of different strains of infectious bronchitis virus, or IBV, in chickens. Many IBV strains result in a drop in egg production and paleness in shell color (specifically in brown-egg layers). Because researchers have yet to understand the cellular mechanisms involved in eggshell coloration, it is unclear how exactly IBV affects the secretion and deposition of pigment onto the shells.[3]

Chicken egg color is determined by the presence of three main pigments: protoporphyrin, biliverdin, and biliverdin-zinc chelate. Varying levels of the three pigments result in a myriad of different shades of eggshells.[1] Although seven genes have been identified in relation to eggshell pigmentation for white and brown eggs, further research is necessary to determine the cellular mechanisms for the secretion and deposition of pigment.[3] Differing from the white and brown egg phenotypes, the blue egg phenotype arose due to the integration of an endogenous retrovirus that enhanced the expression of the SLCO1B3 gene. Again, more research is necessary to determine the exact cellular mechanisms behind the secretion and deposition of biliverdin pigment in blue egg laying hens.[4] Furthermore, despite genes playing a crucial role, the environment also greatly influences eggshell coloration. Thus, eggshell color is the product of both nature and nurture.[3] Despite egg color not being known to affect nutritional value, analysis of egg color in chickens can help the poultry industry best appeal to consumers who demand certain colors of eggs.[1] Also, study of the blue egg color phenotype in chickens can enhance our understanding of viruses and their integration into the genomes of certain organisms.