Difference between revisions of "Geobacter"

A Microbial Biorealm page on the genus Geobacter 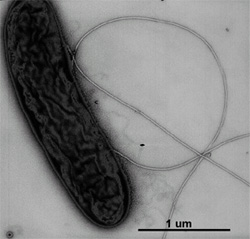 G. metallireducensdisplaying the flagella and pili. From the Genome News Network.

Geobacter is rod-shaped with flagella and is known to have unusual electron transfer and environmental restorative capabilities, giving it several industrial uses. 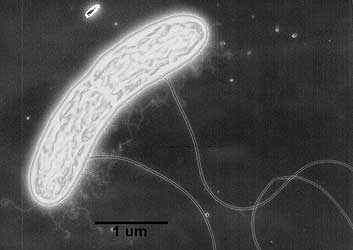 G. metallireducens was the first organism found to respire on organic compounds using iron oxide as an electron acceptor. One such compound is petroleum contaminants in polluted ground water, which Geobacter destroys through oxidation. Geobacter can remove radioactive metals from ground water by reducing metal ions as well. Geobacter has also been found to have the capacity to gain electricity from mud and other inorganic waste matter forms. Through iron oxides that Geobacter obtains, Geobacter helps to provide a model for iron transformations (Geobacter Project, 2004).

Geobacter was first isolated in 1987 from the Potomac River (Geobacter Project, 2004). G. sulfurreducens was later found in a soil sample contaminated by hydrocarbons in Oklahoma (EurekAlert, 2003). When a sedimentary environment contains acetate as the electron donor, typically a Geobacter species is discovered as the iron reducer (D. Lovley, 2004). Recently a strain of Geobacter (strain 121) was isolated that can grow at a higher temperature than any other organism as of yet. This strain was reported as growing at 121°C, a temperature previously thought to kill all organisms (Geobacter Project, 2004).

Lovley, D., The Prokaryotes: An Evolving Electronic Resource for the Microbiological Community. 2004.

The Geobacter Project. 2004. University of Massachusetts.