Difference between revisions of "Geothrix fermentans" 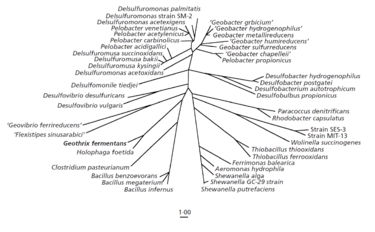 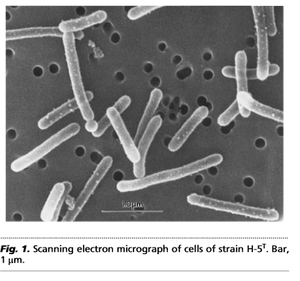 Geothrix fermentans is a rod-shaped, gram negative, non-motile bacterium that is 1-2μm by 0.1μm in size. The cells of this organism occur singly or in chains. The optimum growth temperature of this organism is 35⁰C. There was no growth observed less than 25⁰C. The main habitat of this organism is in anaerobic sediments of freshwater ecosystems.

The organism is a chemoorganoheterotroph meaning that the energy source, electron donor, and the carbon source come from organic compounds. The main way Geothrix fermentans makes energy is in the form of metal respiration. The organism mainly uses acetate as the electron donor and Fe(III) as the electron acceptor. If these two compounds aren’t available, it can also use electron donors such as propionate, palmitate, lactate, fumarate and succinate. Other electron acceptors include Mn(IV), nitrate, 2,6-anthraquinone disulfonate and fumarate. If there isn’t a quality electron acceptor available then the organism can undergo a fermentation process to transfer electrons and make energy. It can use citrate or fumarate as electron donors and make end products that include acetate and succinate.

Geothrix fermentans participates mainly in the carbon cycle and minimally in the nitrogen cycle. In an anaerobic environment, the organism fully oxidizes organic compounds all the way to carbon dioxide as the electrons are passed to Fe(III). This carbon dioxide can now be used by autotrophic organisms to be turned back into organic compounds. The organism also participates minimally in the anaerobic reducing part of the nitrogen cycle.

Fe III oxidation is a unique process in that iron oxide is insoluble in water. This obstacle has given rise to unique processes in transporting the electrons from the electron transport chain (ETC) to their terminal electron accepter. Some organisms secrete enzymes which convert Fe III into a soluble form, and some move the final step of the ETC out of the cell and into the surrounding environment. Microorganisms such as G. fermentans and the Geobacter Genus take the latter approach.

These organisms which give their electron to a solid external electron acceptor are of particular interest to those interested in energy production because these electrons can be passed to materials which conduct electricity without themselves undergoing a chemical change (electrodes). When this ability is coupled with the energetically advantageous process of oxygen reduction in a different part of the material, a current is generated. Geobacter species are currently the most efficient electricity producing microbes, but they have a limitation, they must be in direct contact with the electrical anode to donate electron. This limits the amount of electricity produced by the fuel cell to the surface area of the anode.

Geothrix fermentans currently is less efficient at producing energy, but has a feature with the potential to change that. G. fermentans produces compounds called electron shuttles. These shuttles are have high redox potential and can transport electrons from the ETC far away from the cell to donate them to the terminal electron acceptor. One such shuttle has been identified as riboflavin; the other is a yet unidentified fluorescent compound. These shuttles have the potential to eliminate the surface area limitation on microbial fuel cells and greatly increase their energy output and efficiency.

Several hurdles must be overcome before this can happen though. G. fermentans forms thick biofilms. While this adaptation aides in reducing electron shuttle loss in nature, it restricts electron shuttle movement to and from the anode from all the other bacteria not growing directly on the anode. In this way, surface area is again a restricting factor in energy production. Until this biofilm issue can be resolved, Geobacter species are still the most efficient microbial energy source in terms of microbial fuel cells.