Giardia was first observed in1632 by the Dutch tradesman, Antony van Leeuwenhoek (father of microbiology), while he was examining his own feces under a microscope. In 1859 a Czech Doctor named Lambl encountered the organism while studying the stools of children with diarrhea. Due to his extensive research concerning the organism, it was named Giardia Lamblia. Giardia however was not identified as a disease causing microbe (pathogen) until the 1970s.

Giardia Lamblia is a one celled organism that causes gastrointestinal flu or giardiasis characterized by nausea, abdominal cramps, and diarrhea. It infects humans by infiltrating the body through contaminated water, or fecal to oral contact while in a cystic form. Once inside, the organism breaks its cystic form and attaches itself to the intestinal lining of the host and carries through its metabolic processes. It’s not fully known why Giardia causes the complications that it does. It’s believed that since Giardia binds and covers the surface of the intestines, that it cuts the absorption ability of it considerably, also Giardia may put environmental stresses on the existing bacterial floral as it competes for space and nutrients. It is also suspected that its metabolic processes may produce a mild toxin which accounts for the symptoms experienced, however such a toxin has yet to be completely identified. 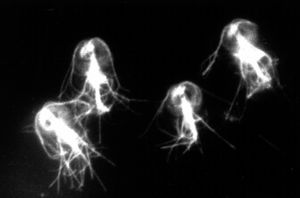 Giardia Lamblia is a one celled organism known as a eukaryote. It is also classified as a parasite. Its cell body is roughly shaped like a tear drop. It has eight flagella in total; four posterior, two anterior, and two caudal (tail-like). Distinguishing features of Giardia include the pressence of two neucleus, the presence of a rough, strong disk located at the “head” by the neucleus that displays adhesive properities. In addition, there are two organels located in the center of the cell body whose purpose is unknown, yet vary in size in shape from one species to the next. Proablly the most distinguishing characteristic of Giardia is it’s lack of mitochondria. Its not fully understood why the organism lacks mitochondira and lysomes for that matter, but research points to the possibility of Giardia being an extremely old eukaryote, probably being in existence before mitochondira started to take up residence inside host cells. Giardia also lacks an endoplasmic reticuleum and golgi bodies.

Giardia is unique in the fact that it has two forms it can take advantage of, a protective cycstic form, and a mobile but vunerable trophozoite form. The cystic form is what people usually get infected by. The cystic form is very durable and given the right conditions, the organims can stay out side of a host body for several months. However once ingested, the cyst will then go through a processes know as excystation where it will spill out its contents and go into its trophozoite form. Once in its trophozoite form it will latch onto the lining of the duodenum using its adhesive disks and feast off the mucus secretions there. In this form, Giardia can also reproduce and spread through other organisms by ways of leaving the host through the digestive tract in its cystic form.

Like other older eukaryotes, Giardia is anaerobic meaning that it does not require any oxygen to carry out its life processes. Giardia gets its nutrients by diffusion or a process called pinocytosis. Its main staple is glucose and is stored in its body as glycogen. The by products of its metabolic processes include; CO2, ethanol, and acetate.