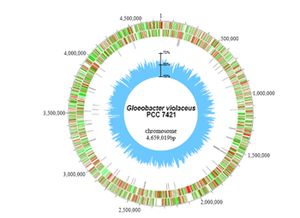 Gloeobacter violaceus is unicellular organism that exhibits atypical characteristics compared to other cyanobacterium. Its unusual characteristic is the lack of an internal thylakoid membrane system [3]. The rod shaped phycobilisomes of this organism are heavily packed and attach to the plasmic surface of they cytoplasmic membrane. The cell walls of Gloeobacter violaceus are comprised of multiple layers. Starting from the exterior of the cell wall there is a sheath layer, then a double tracked structured outer membrane, intermediate cell wall layer that is electron dense, then lastly, a electron dense peptidoglycan layer. It gets its energy from oxygenic photosynthesis which is unique to this organism because usually the machinery for photosynthesis is found in the thylakoid membrane and not in the cytoplasmic membrane. Important products that G. violaceus produces are petJ and petE which are used for soluble electron transfer catalysts. Also, Gloeobacter violaceus has a lower light requirement for growth than other cyanobacteria, but a higher than normal light saturation level for electron transfer rate [4].

The appearance of oxygenic photosynthetic organisms, such as Gloeobacter violaceus, on earth represents the largest discontinuous process in the evolution of photosynthetic organisms. Since the appearance of organisms that are oxygenic photosynthetic, scientist have revealed that they contribute the determining factors that has shifted the direction of global biological evolution through an increase in the oxygen concentration on the Earth [5]. Another important characteristis of the cyanobacterium Gloeobacter violaceus, contains Ths and GroEL and the recombination repair proteins RecA and RadA which enable it to exhibit characterisitics that are similar to Archaea in expressing multiple detoxification PHX bacterioferritin comigratory proteins and several Hsp20s. Also, circadian rhythms have intensively been studied in cyanobacteria, and genes involved in various processes of circadian timing and regulation have been identifiedin many species of cyanobacteria. These genes include kaiABC as the major genetic elements of the circadian clock, sasA, cikA, ldpA, and pex as input modifiers, and rpoD2 and cpmA as output modifiers. Even after scientist completed an intensive search, they could not detect kaiABC in the Gloeobacter violaceus genome. It is therefore likely that Gloeobacter violaceus does not have a genetic controlling system for circadian rhythms and that cyanobacteria have acquired this system after divergence of the Gloeobacter violaceus lineage. Alternatively, Gloeobacter violaceus might have lost such genes [2].

Also, a study completed by Koyama et., al revealed that two new linker proteins were identified by peptide mass fingerprinting in phycobilisomes isolated from the cyanobacterium Gloeobacter violaceus PCC 7421. The proteins were products of glr1262 and glr2806. Three tandem phycocyanin linker motifs similar to CpcC were present in each. The glr1262 product most probably functions as a rod linker connecting phycoerythrin and phycocyanin, while the glr2806 product may function as a rod-core linker. Their observations in morphology of phycobilisomes in Gloeobacter violaceus is consistent with what has been reported about Gloeobacter violaceus's bundle-like shape with six rods. [8]

In a study conducted by Steiger et., al 2005, they revealed that Gloeobacter violaceus is a cyanobacterium isolated from other groups by lack of thylakoids and unique structural features of its photosynthetic protein complexes. They investigated carotenoid biosynthesis with respect to the carotenoids formed and the genes and enzymes involved. Their carotenoid analysis identified ss-carotene as major carotenoid and echinenone as a minor component. This composition is quite unique and the cellular amounts are up to 10-fold lower than in other unicellular cyanobacteria. Also, carotenoid biosynthesis was also found to be up-regulated in a light-dependent manner. This enhanced biosynthesis partially compensates for photooxidation especially of ss-carotene. They also sequenced the genome of Gloeobacter violaceus and analyzed several gene candidates homologous to carotenogenic genes from other organisms obtained. Functional expression of all candidates and complementation in Escherichia coli led to the identification of all genes involved in the biosynthesis of the G. violaceus carotenoids with the exception of the lycopene cyclase gene. An additional diketolase gene was found that functioned in E. coli but is silent in G. violaceus cells. The biggest difference from all other cyanobacteria is the existence of a single bacterial-type 4-step desaturase instead of the poly cis cyanobacterial desaturation pathway catalyzed by two cyanobacterial-type desaturases and an isomerase. The genes for these three enzymes are absent in G. violaceus [6].

Another study completed by Mimuro et. al they were able to conclude that since Gloeobacter violaceus clearly synthesizes MQ-4, their combined results indicate that this cyanobacterium must have a novel pathway for the synthesis of 1,4-dihydroxy-2-naphthoic acid. In their study they examined the secondary electron acceptor of photosystem (PS) I in the cyanobacterium Gloeobacter violaceus PCC 7421 and identified it as menaquinone-4 (MQ-4) by comparing high performance liquid chromatograms and absorption spectra with an authentic compound. The MQ-4 content was estimated to be two molecules per one molecule of chlorophyll (Chl) a', a constituent of P700. Comparative genomic analyses showed that six of eight men genes, encoding phylloquinone/MQ biosynthetic enzymes, are missing from the Gloeobacter violaceus genome.[9]

More recently a study performed by Belkin et. al, revealed that the internal pH values of two unicellular cyanobacterial strains could be determined with electron spin resonance probes, over an external pH range of 6 to 9, in the light and in the dark. In this study the slow growing, thylakoid-lacking Gloeobacter violaceus was found to have a low capacity for maintaining a constant internal pH. They also found that their was a distribution pattern of weak acid and amine nitroxide spin probes across the cell membranes of this organism, in the light and in the dark. This finding was consistent with the assumption that Gloeobacter violaceus contains a single intracellular compartment. [11]