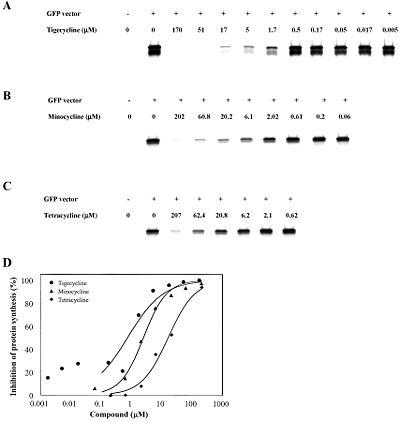 Genes with expression changes greater than 8-fold between Mu3 and N315 parent and mutant strains.

The tetM gene was overexpressed in two of the four Mu3 mutants. They attributed this to a 87-bp deletion in the tetM promoter region that removed a stem-loop-forming region that likely regulated the gene by allowing for transcription attenuation. The loss of this region would cause the gene to be overexpressed. Experiments similar to those used to test the effect of mepA overexpression were carried out to determine the effect of TetM on tigecycline susceptibility. They found that TetM alone was not enough to produce resistance to tigecycline. Even in combination with the MepA efflux pump, no additional resistance to tigecycline seemed to be produced by the overproduction of TetM, suggesting that even though both mutations were present in these strains, they do not seem to work synergistically. Also, this shows that tigecycline seems to be able to completely resist the effects of TetM, giving it a distinct advantage over tetracycline for use in treating infections.