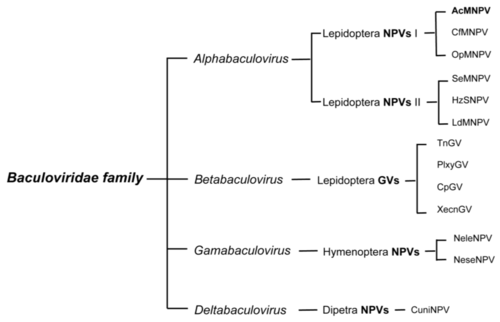 CpGV is a double stranded DNA virus with a circular genome. The genome is 123,500 bases with 143 open reading frames. 25 of the genes are unique to CpGV, while 118 are homologous to other Baculovirus species. CpGV encodes six genes required for genome replication, which includes DNA polymerase and helicase. It has genes for granulin/polyhedrin, which is a major protein involved in the formation of viral inclusion bodies. Auxiliary genes include proteases, such as chitinase, which are dedicated to the degradation of host structures and the prevention of host cell death (Luque et al, 2001).

Granulosis was discovered in the early 1960’s, and was found to only infect the codling moth (C. pomonella) and species closely related to it. The codling moth bores into apples, which makes them unfit for human consumption. Spraying apples with granulosis virus significantly decreased the amount of damaged apples, and killed most codling moth larvae before they could enter the fruit; most died after feeding on the epidermis of the treated fruits, which are still suitable for human consumption (Falcon et al, 1968).

The occluded form of the virus is consumed by hosts off of leaves, where it is released in the alkali environment of the C. pomonella larva midgut. The occluded form is responsible for primary infection, which occurs in gut basal cells of the larva. The cells endocytose the virus, which uncoats and releases its genome at the nuclear pores. The genome is then incorporated into the host genome, and is transcribed by host machinery. The assembled virus buds off of the opposite side of gut lumen cells, where it is released to infect the rest of the organism. This form of the virus, the budded form, is responsible for secondary infection within the host. Granulosis encodes proteases such as chitinase that degrade host proteins and liquify the host, which is the cause of its death (Luque et al, 2001).