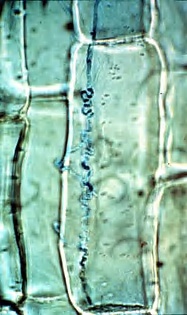 The relationship between certain grasses and endophytic fungi is a symbiosis and ranges from mutualistic to antagonistic [8]. When grasses are infected with endophytic fungi, they can receive important benefits such as anti-herbivory from insects and vertebrates. A major benefit these fungi can provide is their use as a biological control against predators of grasses. This can reduce pesticide use and result in lower inputs for maintenance [2]. The endophytic fungi also contribute drought tolerance and improved growth of the plant[8]. While the fungi provide the plant with various benefits, the plant provides the fungi with shelter, a source of food, and disemmination via host propagules. The discovery of this relationship occurred when cattle grazing on the infected grass developed delirium and “livestock staggering” occured [2].

The endophytic fungi and grass relationship can be mutualistic, antagonistic, or exhibit both characteristics . In an antagonistic relationship, host seed production is completely suppressed and the fungi only transmits horizontally sexually.Prior to the grass flowering, the endophyte mycelium proliferates specifically on the leaf sheath surrounding the young inflorescence. The fungi surrounding and adding to the flower structure are young stroma loaded with spores. This formation prevents the inflorescence from emerging and no seeds are produced. If mating of the different stroma occur, infection of neighboring plants may occur[8].

Mutualistic relationships exhibit vertical transmission of the fungal hyphae via seeds, which become the common diaspore for plant and fungi [8]. There are a variety of advantages the grass receives from the fungi in a mutualistic relationship. This includes enhanced herbivory resistance, fungal disease resistance, enhanced vegetative growth, and increased drought tolerance[1].

The endophytic fungi also receive benefits in both mutualistic and antagonistic relationships. This includes greater access to nutrients, protection from desiccation, protection from surface feeding insects, and protection from parasitic fungi and competition among other microbes [1]. Depending on both the fungal and grass species, the relationship can be very specific or have a wide range of possible host grass plants.

Endophytic Fungi produce alkaloids (ergot and indolediterpene) that are toxic to mammalian herbivores. These alkaloids posess both anit-insect and antivertebrate activities that result in livestock problems [8].The endophytic species that most affects mammals are from the genus Neotyphodium . When mammals consume grass infected with the fungi, different neurological effects take place [1].

Cattle that graze on infected tall fescue (Lolium arundinaceum) grass can develop a condition known as "fescue foot". Over a long period of time, blood is reduced to extremities which eventually leads to the tail or hooves rotting off [1]. This was a large problem in the mid-1970s after tall fescue (Lolium arundinaceum)had been largely used as a forage crop throughout the United States [8]. 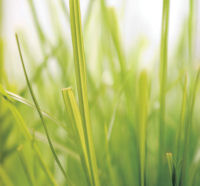 Rye Grass infected by endophytic fungi. There are no visible symptoms. [2]

When animals graze on perennial rye grass infected by N.lolii, they may develop uncontrollable spasms[1]. This occurs when the animal ingests the indolediterpene alkaloid which induce the tremors [8]. Another grass, sleepy grass, contains Neoptyphodium that causes horses to sleep for two to three days [1].

Insects have different reactions to the toxins produced, but the overall pattern is that the endophytic fungi promote anti-herbivory benefits in grasses. The alkaloid toxin that protects against herbivory are lolines and peramines [3]. Loline alkaloids have a broader range and more toxic to insects than is peramine. The levels of loline will dramatically increase when herbivory takes place, therefore this is an inducible defense in the symbiotum [8].

Fungal endophytes, in particluar Neotyphodium, are shown to reduce colonization of arbuscular mycorrhizal fungi on the host. Mechanism by which the endophyte reduces colonization is through allelopathic effects. The affect on the mycorrhizal fungi from endophytic fungi is an important process to understand because mycorrhizae promote plant growth and overall, grassland ecosystems [4].

Endophytic fungi are distributed in the intercellular portion of the host and restricted to above ground growth [1]. This growth occurs in the floret, sheath, stem, and leaf tissues of the developing grass seedling and maturing plant [2]. Endophytic fungi are considered an intercellular foliage symbiont and associations are established at the seedling stage and are long-lived. All grass fungal endophytes are capable of growth on a wide range of simple carbon sources. The endophytic fungi need amino acids, simple sugars, and a variety of vitamins to survive and are acquired from the apoplasm of the host [1].

One of the more important processes involved in the endophytic fungi - grass relationship is the production of alkaloids. There are four different kinds of alkaloids produced, and each have different consequences. The first two, lolines and peramines have no other close chemical relatives. These two toxins protect against herbivory. The other two are ergotoxins and indolediterpenoid tremorgens which are the toxins that affect the mammalian neurological system. These toxins help prevent insect and mammalian herbivory and increases plant growth and vigor. The environmental impacts may include decreased insect populations and increased grasses that are infected with endophytic fungi [1].

The genus Balansia became endosymbiotic when the group of the B. claviceps subclade evolved from an episymbiotic ancestor. Work has shown that endophytic Balansia are limited to the Americas [1].

All species of the genus Epichloe are endosymbiotic. Epichloe are important for protection of the hosts under environmental stresses imposed biotically or abiotically. There are three types of endophytes [1].

Benign symbionts are highly beneficial to the hosts and only transmit vertically . The symbiont is asexual (Neotyphodium) [1].

Balanced symbiosis is said to have the most benefits for the host grass. This is a relationship that transmits both vertically and horizontally. The grass and fungus both have a sexual stage and asexual reproductive capabilities. According to research, most symbiotic relationships are pleitropic for both Epichloe and Neotyphodium [1].

Field experiments and population surveys were used to find how endophyte infection and alkaloids influenced the abundances, species richness, and guild structure of arthropods on native grass. This study research sleepygrass (Achnatherum robutum) and found that when alkaloids were produced, there was increased herbivory abundance. This study goes against other findings that have been found in agronomic grass systems. High alkaloid levels may not always mean increased protection against herbivory [6].

This experiment examined endophytic fungi infected and non infected seeds of two grasses, Festuca rubra and Festuca ovina. The results show that the effects of the endophyte on the grass depends on various factors such as species of grass, genetic background, and the mother plant habitat [7].

|[4] Antunes, P.M. et al. "Even after death the endophytic fungus of Schedonorus phoenix reduces the arbuscular mycorrhizas of other plants." Functional Ecology 2008, 22, 912-918.

Edited by <Maureen Schwer>, a student of Angela Kent at the University of Illinois at Urbana-Champaign.