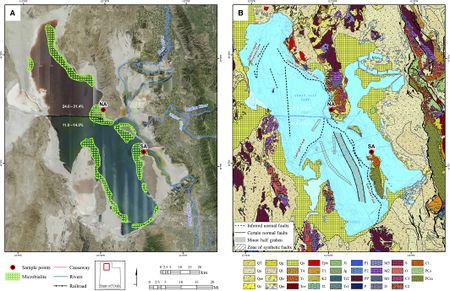 
The Great Salt Lake is located in Utah and is a highly saline Lake [1]. The Great Salt Lake is a remnant of a prehistoric freshwater lake, which has turned saline because of the blocked rainfall from the Sierra Nevada [1]. Furthermore, it is unique in that it the Lake shows an increasing salinity gradient from south to north, ranging from seawater concentrations to saturation, respectively [2]. Despite these high saline conditions, Great Salt Lake still shows high biodiversity [2][3]. Considering the extreme nature of this environment, many of the microorganisms are novel and uncultured; however, as the environment might suggest, the large majority of phyla that inhabit the Great Salt Lake are halotolerant and halophiles [3].

The Great Salt Lake is a large Pleistocene lake that is a remnant of Lake Bonneville which was a fresh body of water [1][6][7]. The Great Basin, in which Lake Bonneville and other Pleistocene lakes formed, originated after the beginning of some extensive normal faulting [6][8][9][10]. The Great Salt Lake is now a hypersaline body of water that is divided into a north-south end that is 300-miles long and an east-west end that is 180 miles long [6]. The two arms (north and south) are the result of the construction of a railroad causeway in 1959 which divided the lake [1]. Due to evaporation, the north end is slightly more saline and with replacement of water only in the south [1]. The major source of freshwater inflow comes from three major rivers, the Bear, Weber, and Jordan rivers which enter the south arm [1][9][10]. Furthermore, due to the northward migration of water, the north arm is becoming increasingly enriched in minerals while the south-arm is slowly becoming depleted [1][8]. The geologic record indicates that the Great Salt Lake has gone through at least ten cycles in the last 100,000 years, and the present-day Great Salt Lake is at its lowest point in the most recent cycle [1]. Furthermore, the Great Salt Lake has no natural outlet to the sea and is thus a terminal lake [1]. 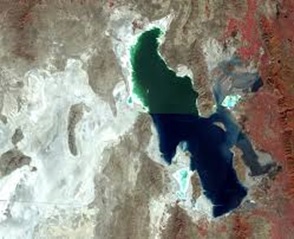 The land that surrounds the Great Salt Lake is primarily Mesozoic and Paleozoic sedimentary rock with the addition of some recent intrusive and extrusive rocks [1]. Within the lake, there are many small islands such as Gunnison, Dolphin, Black Rock, Antelope, and Fremont just to name a few [6]. The east of the lake is bounded by the Wasatch Mountain and the west is bounded by the Lakeside and Hogside Mountains [6]. The Wasatch Mountain and most of the east of the lake is primarily pre-Cambrian crystalline rock such as gneiss, schists, pegmatites, and granite [6]. The western side, however, is composed of Paleozoic and Algonkian limestone, shale, sandstone, and quartzite [6].

The chemistry of both the north and south arm of the Great Salt Lake are markedly different. The south arm follows a composition that is more like the marine environment (thalassohaline) with the dominant ions being Na+ and Cl- [1]. The north arm, however, has an ionic composition that is dominated by Na+ and SO42- [1]. During the winter months in the north arm, when the temperature drops below 3°C NaSO4 will precipitate spontaneously out of solution to form an ~20 cm layer of hydrated NaSO4 at the bottom of the lake [1]. When the water temperature rises, the NaSO42- dissolves back into solution [1].

The microbial abundance and diversity in the Great Salt Lake is quite high despite its salinity and other extreme conditions [1][8][2][3]. Furthermore, statistical diversity indices indicate that both bacteria and archaea are extremely diverse [3]. Since the lake has a different ionic composition at the north arm and south arm, so too does the microbes differ [1].

Although eukaryotes do not comprise a large portion of the microorganisms in the Great Salt Lake, there still remains a variety of species. In general, the primary producers of the lake are from the genus Dunaliella [1]. The south arm has a lot of algae belonging to the cyanophyta; these consist of calcium carbonate precipitated around cells of Oscillatoria sp. and Coccochloris elegans [1]. In the north arm, there are low levels of Duniella viridis, but it is highly populated with red algae with two flagella and sluggish motility [1]. The red algae are comparable morphologically to Dunaliella salina strains [1]. The red algae do not form uniform in the lake, but in huge patches [1]. In addition, there are higher order eukaryotes that inhabit the Great Salt Lake, primarily Artemia salina (brine shrimp) and Ephydra (brine flies) [1].

The bacteria of the north arm are very abundant, and their numbers are so vast that the water becomes a rose wine color due to the carotenoid pigments [1]. The rose color caused from the pigments is very apparent from the shore, but is most visible from the air [1]. The majority bacteria that have been isolated from the lake and contribute to the majority of the carotenoid pigment are Halobacterium and Halococcus species. These bacteria have broad biochemical capabilities including acid production from carbohydrates [1]. In addition to the bacteria in the north arm, there are a variety of specific halophages such as Halobacterium halobium [1].

Outside of the extensive study performed by Post (1977), the microbial diversity remains understudied in the present. Importantly, however, Tazi et al. (2014) has used culture independent methods to show that the Great Salt Lake shows OTUs that are significantly different and unique than other hypersaline environments in the world [3].

The chemical compositions of the north and south arm of the Great Salt Lake differ markedly and consequently, the key microbial players in each arm is also different.

• Oscillatoria is a genus of cyanobacterium that uses photosynthesis as its source of metabolism. There are many species within this genus, many which have not been completely identified yet at the Great Salt Lake. 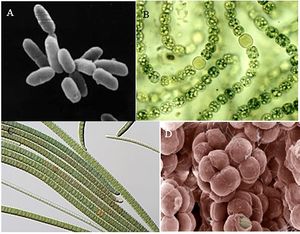 • Red algae are a part of eukaryotic algae. Red algae use photosynthesis as their mode of metabolism and as such play an important role in being one of the only primary producers in the north-arm of the Great Salt Lake.

• Halobacterium, an archaea, are a genus that are halophilic. Because of the salinity gradient, thus, higher salinity in the north arm, halophilic and halotolerant genus and phyla are the primary organisms. This is why halobacterium are abundant in the north arm. Halobacteria use an aerobic metabolism that requires a high concentration of salt or else their proteins may not function properly at lower salt concentrations.

• Like the halobacterium, halococcus are an extreme halophilic archaea. Halococcus are primarily organotrophs, but some are also able to photosynthesize. Similarly, a high presence of salt is required for their proteins to work properly. 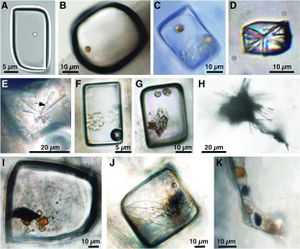 This grid of fluid inclusion images shows a variety of different microorganisms, primarily algae and prokaryotes, that have become encased in salt crystals[12].

Furthermore, there is implication for long-term preservation of halophiles due to the high salinity of these environments such as the Great Salt Lake [14]. Saline environments may pose to have great preservation potentials because of their ability to increase thermal stability, decrease denaturing of cellular components, and increase resistance to dehydration [14]. Because of this preservation potential, hypersaline environments may also provide a target environment for studying the ancient Earth as well as ancient metabolisms [14]. Under some circumstances, microorganisms may become encased in a growing salt crystal in a micro-aqueous environment known as a fluid inclusion [14]. Studies at the Great Salt Lake have been shown to resurrect halophiles within ancient fluid inclusions [14].

The Great Salt Lake is a hypersaline lake that is a remnant of the freshwater lake, Lake Bonneville. The Great Salt Lake primarily experiences hypersalinity because it falls within a rain shadow which has largely been one lake. However, in 1959 a railroad causeway was built, consequently dividing the lake into a north-arm and south-arm. This division resulted in a difference in salinity for both arms of the lake. Because of this salinity gradient and division, the microbial diversity is markedly different between the north-arm and south-arm. As the name may suggest, halophiles and halotolerant organisms make up the microbial ecology of the Great Salt Lake such as cyanophyta, halococcus, halobacterium, Oscillatoria, and Duniella. Furthermore, since hypersaline environments are likely prevalent throughout the solar system, hypersaline lakes like the Great Salt Lake are used for analog studies for implications for life outside of Earth.