Group B Strep and Pregnancy

Figure 2. Primary hAECs were isolated from chorioamniotic membranes and the percent adherence of GBS WT, isogenic ΔcovR, ΔcovRΔcylE, and ΔcylE mutants were compared[7].[1].

GBS has been isolated from the amniotic fluid of birthing people with intact chorioamniotic membranes, suggesting that GBS is capable of invading and breaching amniotic epithelium and chorioamnion[7][8][9][10][11]. This led Whidbey et al. to hypothesize that “intra-amniotic GBS infections in patients with intact placenta or chorioamniotic membranes may be due to elevated virulence factor expression”[7][8][9][10][11].Previous studies showed that the expression of GBS virulence genes is regulated by a two-component regulatory system: COVR/S[7][12][13][14]. More specifically, COVR/S was described to repress a multitude of GBS virulence genes, including the cyl operon, which contains the cylE gene that is that is important for the production of the pluripotent toxin, hemolysin [7][12][13][14]. In order to test whether or not increased expression of GBS virulence genes promotes the invasion of amniotic epithelium, Whidbey et al. compared the abilities of wild-type (WT) GBS and hyper-hemolytic GBS (ΔcovR) GBS to adhere to and invade human amniotic epithelial cells (hAEC)[7].The hAECs were isolated and cultured from “normal, term placentas obtained immediately after cesarean delivery from” birthing people without labor[7]. Non-hemolytic GBS strains (ΔcovRΔcylE and ΔcylE) were also included in the experiment to investigate hemolysin’s role in GBS strains’ ability to adhere to and invade hAECs[7][15]. The results suggest that all GBS strains adhered to hAECs, as seen in Figure 2.Notably, as shown in Figure 3, WT GBS invaded hAECs (~4% invasion), non-hemolytic GBS showed a significantly decreased invasion when compared to the WT (~0.3% invasion), and the hyper-hemolytic strain (ΔcovR) was significantly more invasive when compared to the WT (~80% invasion)[7].In sum, Whidbey et al. concluded that hemolysin promotes GBS invasion of hAECs.

Next, Whidbey et al. investigated if the increased expression of hemolysin in the hyper-hemolytic GBS strain (ΔcovR) activates an inflammatory response[7]. Whidbey et al. isolated RNA from GBS-infected hAECs four hours after infection, and they used qRT-PCR to examine any changes in the expression of inflammatory genes[7][16]. The results, depicted in Figure 4, suggest that infection with ΔcovR caused a significant increase in the transcription of cytokines (e.g., IL-6 and IL-8) in hAECs[7]The increase in the expression of inflammatory genes in hAECS infected with ΔcovR was abolished in hAECs infected with the non-hemolytic strain, ΔcovRΔcylE. In sum, hAECs that were infected with the hyper-hemolytic GBS strain, ΔcovR, did show an inflammatory response. 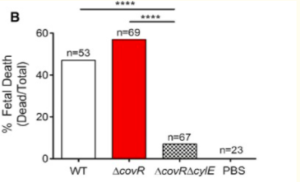 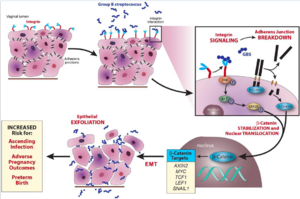 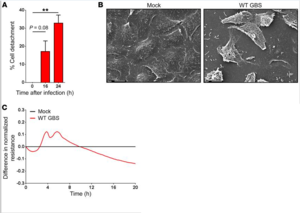 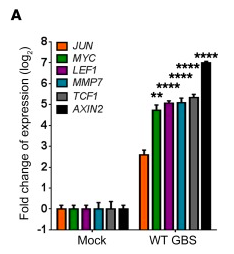