Autism spectrum disorder (ASD) is the category of which autism falls under. ASD describes a range of neural development disorders which normally manifests in children before 18 months of age but late onset can occur after 18 months [1,2]. There are different degrees of ASD with varying symptoms among individuals. It is usually characterized by difficulties in social interaction, repetitive behaviour and delays in understanding language [2]. The etiology of autism is unknown. However, autistic children have been reported to suffer from severe and frequent gastrointestinal (GI) problems which suggests that there may be a link between autism and the gut [3,4].

It is estimated that there are about 300-500 different species of bacteria that form a mutualistic interaction with the human digestive tract to provide metabolic, immune and protective functions [5]. Gut flora aid in the fermentation of non-digestible dietary residue and carbohydrates. They also help produce short chain fatty acids. The gut microbiome consists mainly of bacteria from two phylum Firmicutes and Bacteroidetes [5].

In 2002, stool, gastric juice and duodenal fluid samples from collected from various children hospitals from autistic patients with a history of GI problems and were examined [6]. In total, 25 different species of Clostridium were encountered, 9 of which were found exclusively in the gut of autistic children while 3 species were only found in the control (6). Clostridium difficile, a species that was found only in autistic stools, is known to be a major cause of severe GI diseases through its production of enterotoxin A, which is responsible for various GI symptoms through an unknown mechanism [7]. Another study published in April of 2012 found that those with late onset autism have been shown to have higher counts of Desulfovibrio in their fecal matter via pyrosequencing but Clostridium was not isolated [1]. 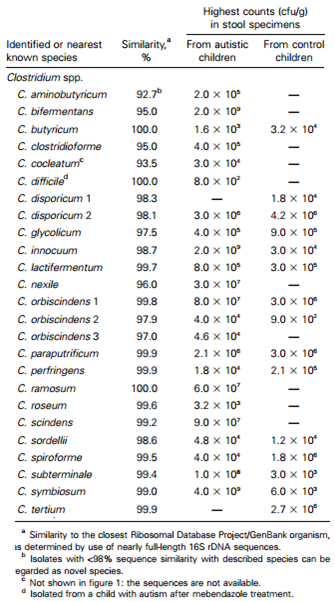 Clostridium is a genus of Gram-positive, obligate anaerobic, spore-forming bacteria while Desulfovibrio is a genus of Gram-negative and aerotolerant bacteria [8]. Their metabolism produces short-chain fatty acids (SCFA) from carbohydrates and amino acids. Increased levels of SCFA present in circulating blood can cross the blood brain barrier where they affect brain development and function [9]. Propanoic acid (PPA) is a type of SCFA known to influence cell signaling, neurotransmitter synthesis/ release, mitochondrial function and gene expression [9]. It interferes with cellular metabolism by overwhelming the metabolic functions of the mitochondria to cause oxidative dysfunction and stress [8]. Increased PPA over the developmental time period may play a role in the development of autism and other neurodevelopment disorders [7].

An experiment performed in 2008 tested the hypothesis that increased levels of PPA resulted in autistic-like characteristics such as impaired social behaviour [10]. 114 adult male rats were randomly selected into the following groups: PPA, propanol control, sodium acetate (SA) control and phosphate buffered saline control (PBS) [10]. Sodium acetate is produced in the gut from carbohydrate fermentation and propanol is a non-acidic analog of PPA.

Behaviour was analyzed with two rats of the same experimental conditions and data was collected on the following variables via a video tracking software: mean distance between rats, percent of time rats spent within 5cm proximity of each other and total distance travelled by an individual rat [10]. Additionally, the rats were videotaped and evaluated for playfulness based on frequency of play initiations, number and type of defenses evoked [10].

The results showed that the rats with injected PPA had consistently impaired social behaviour. PPA injected rats exhibited a greater distance apart, spent less time within a 5cm proximity to each other, had less play interactions, and were more likely to show evasive defenses [10]. These findings support that increased PPA levels somehow impair social behaviour. SA rats initially showed these behaviours as well, but they decreased as time progressed [10]. Propanol and PBS injected rats did not show any of the above behaviours [10]. The rats were not tested for the presence of Clostridium or Desulfovibrio.

There are no studies published on the use of antimicrobial agents against Desulfovibrio but there was a trial study based on the use of oral vancomycin on late onset autistic children with a history of chronic diarrhea. Vancomycin is an antibiotic used to treat infections caused by Gram-positive bacteria, making it very effective against Clostridium but ineffective against Desulfovibrio [11]. The hypothesis was that the protective function of gut flora was compromised due to the use of antimicrobial agents, which allowed the colonization of Clostridium [11].

Post and pre-treatment behaviours of the patients were videotaped and evaluated by a clinical psychologist. It was found that 8 out of 10 of the autistic patients had improved behaviour [11]. They were less aggressive, had increased eye contact and improved in their receptive language and speech. Most of their GI problems also went away. Unfortunately, follow up indicated that the effects of vancomycin were short term and the children returned to their previous behaviour [11]. It is speculated that the spores of Clostridium were unaffected by the treatment which may have led their recolonization [11].

From the above findings, it does seem that there is a strong link between Clostridium and Desulfovibrio species and autism. Though exact mechanisms are unclear, they do seem to produce products as part of their metabolism to somehow disturb the central nervous system. The evidence seems to suggest that the acidity of PPA may affect the gut as the non –acidic analog of PPA did not show any autistic-like behaviour. These findings only relate to a subset of autistic patients who have GI issues and not the entire autistic population.