Difference between revisions of "H5N1 Influenza A" 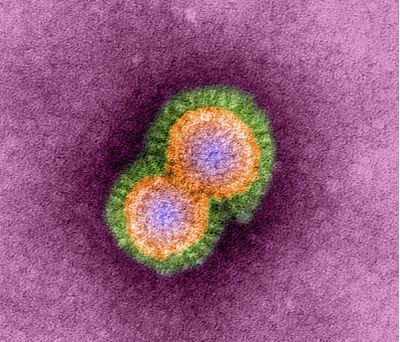 Avian Influenza A (H5N1) is a type of influenza virus responsible for causing severe respiratory disease in birds, generally waterfowl, and humans. However, researchers have yet to definitively document human-to-human transmission and victims of avian-to-human transmission generally spend substantial amounts of time around birds (like poultry farm workers, migratory duck herders, etc.) There is a growing level of concern about the virus because of its high mortality rate and its predisposition to mutation. This renders the human adaptive immune response fairly inadequate against the infection, and the virus has the potential to be devastating to the human population if it were to mutate to a strain capable of human-to-human transmission. Symptoms of H5N1 infection include high fever (>38°C), malaise, cough, sore throat, muscle aches, abdominal or chest pain, and diarrhea. The sequelae of H5N1 infection are often severe respiratory illness including pneumonia and acute respiratory distress syndrome as well as neurological changes like altered mental state and seizures. Treatment often involves implementation of the antiviral medication oseltamivir. At this stage, all vaccinations are still experimental [1].

Transmission of H5N1 primarily occurs via direct avian-to-human contact. Major risk factors include handling diseased poultry and the consumption of raw or undercooked poultry products. The exact mode and sites of infection in the respiratory tract remain unknown. H5N1 also has several mammalian hosts including cats, dogs, and ferrets. None have been shown to transmit the disease to humans. However, a genetically modified strain of the virus was capable of airborne transmission in ferrets, which gives insight into the possibility of human-to-human transmission [2]. The mode of transmission remains unclear for about one quarter of infected patients and environment-to-human transmission has not been ruled out. It is still uncertain whether infection can begin in the gastrointestinal tract, but it has been implicated in other mammals and is an open area of research.

There is not a definitive known infectious dose for H5N1 and it is likely dependent on a number of host factors like age, race, genes, and location. However, it seems clear that a low number of viral particles can proliferate extremely successfully once they have become bound in the respiratory tract.

The incubation period for H5N1 infection is generally 7 days or less, many times as little as 2-5 days. In cases where human-to-human transmission likely occurred the average is 3 days. However, some reports estimate as long as 8-9 days.

The first documented case of H5N1 was in a 3-year-old boy in Hong Kong SAR that promptly died from respiratory failure in 1997. By the end of 1997, 18 people had succumbed to the virus. There have been about 600 reported cases of H5N1 infection since 1997 and the virus reemerges periodically, infecting clustered regions of people who are generally related or in very close proximity. The median age of infected persons is 18 and 90% of patients are under 40 and healthy. Mortality is estimated to be 61% and is highest in the 10-19 year age range. Interestingly, observed cases typically occur in cooler months but are often correlated with outbreaks in poultry. Despite likely widespread human exposure, human infections remain relatively rare [3]. 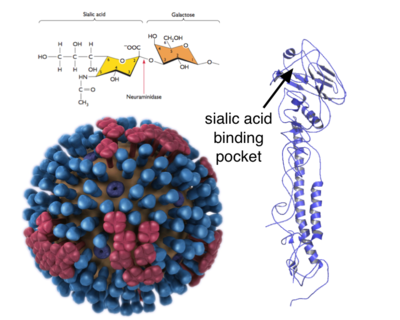 Avian influenza A viruses are enveloped, single stranded negative sense RNA viruses that contain 8 segments of RNA that code for 10 proteins. They have surface antigens called haemagglutinin (HA) and neuraminidase (NA) that are responsible for binding to host tissue. There are 16 subtypes of haemagglutinin and neuraminidase and their genes appear to have a synergistic effect on virulence. Researchers have identified 15 amino acid residues from 4 influenza virus genes from the 1997 Hong Kong strain that seemed to determine high- versus low-pathogenic phenotypes. Furthermore, the absence of glycosylation sites at aa154 in the HA gene result in increased virulence. H5N1 strains isolated from humans have an acquired mutation that permits binding to both ∝2,3-linked sialic acid receptors and ∝2,6-linked sialic acid receptors that also produce increased virulence. However, it seems that the virus will require a mutations in a number of genes in order to confer effective human-to-human transmission.

H5N1 infections typically manifest as severe pneumonia that rapidly progresses in to acute respiratory distress syndrome. The time from on set of infection to death is generally 9 days with fatality percentages ranging from 50-80% depending on the region of the cluster outbreak. Some febrile upper respiratory illness has occurred without pneumonia more frequently since 2005, but this is likely due to increased administration of antivirals. Other commonly related conditions include leucopenia, lymphopenia, mild-to-moderate thrombocytopenia, and elevated levels of aminotransferases as well as elevated levels of lactate dehydrogenase, creatine phosphokinase, hypoalbuminemia, and d-dimer levels. The very non-specific nature of the clinical presentation often results in misdiagnosis [4].

Conventional or real-time reverse-transcriptase PCR is the best method under biohazard level 2 conditions. Primers need to be continuously updated, given the high rate at which the virus mutates. Most often primers are engineered to target mutations in the H5 haemagglutinin gene. Diagnostic yields are generally highest from throat specimens rather than nasal swabs because viral loads are usually highest in the throat. A single negative result should not rule out H5N1 infection and multiple samples should be taken. Samples can also be taken from the blood and stool, but they generally have lower diagnostic sensitivity. The detection of anti-H5 antibodies is requisite for diagnosis and microneutralization assays are typically the most reliable method for recognition. However, it should be noted that microneutralization is labor intensive and required biohazard level 3 conditions. Furthermore, haemagglutinin-inhibition assays that use erythrocytes from horses are a promising diagnostic option, but require further investigation.

Many forms of influenza A virus are susceptible, at least to some extent, to antiviral agents. Oseltamivir, marketed under the tradename Tamiflu, is a neurominidase inhibitor that is most often administered in H5N1 infection cases. However, the dosage is dependent on the strain’s rate of replication, as many oseltamivir-susceptible strains have high rates of replication. The general regimen presecribed for H5N1 infection, when prescribed early (1-3 days after onset of infection), is 75 mg twice daily for 5 days. Other potential treatment involve a combination of oseltamivir and amantadine or zanamivir (in cases where strains are oseltamivirR) depending on the nature of the infecting strain and the stage of the patient’s illness.

Management of hypoxemia and treatment of nosocomial complications generally supplement antiviral treatments. Furthermore, the use of corticosteroids for any period for the duration of the infection is discouraged, as it may render the patient more susceptible to infection.

Avian influenza A viruses can be inactivated by general hygiene measures involving chemical agents and physical conditions like the use of soaps, detergents, and alcohols.

Some literature suggests that safe immunogenic inactivated H5 vaccines have been developed [6]. However, the antibody levels required for protection against H5N1 is unclear and the duration of the antibody response is limited. Additionally, there is serious concern about the cross-reactivity of Avian Influenza A (H5N1) and memory T cells established by seasonal human influenza A infections in healthy individuals, although the risk appears to be lower for children and the elderly[7]. Various investigational approaches, including conserved antigen vaccines, vectored H5 vaccines, and other adjuvants are currently being investigated.

To date, very little is known about the details of the host immune response to H5N1. However, it seems clear that T cell cross-reactivity with conserved portions of H5N1 are responsible for the severity of the disease. Patients typically have exaggerated levels of expression of cytokines and chemokines, which in turn produce a massive inflammatory response, thereby rendering the host more prone to additional infection [7]. Furthermore, it appears that the serum antibody responses of H5N1 survivors are significantly impaired, suggesting that T cell-based heterosubtypic immunity may be implicated as an important preventative measure [8].

5. [WHO Rapid Advice Guidelines on pharmacological management of humans infected with avian influenza A (H5N1) virus. May 2006 (Accessed July 22, 2013 at http://www.who.int/influenza/resources/documents/pharmacological_management_h5n1_05_2006/en/)]

Created by Marrett Hild, student of Tyrrell Conway at the University of Oklahoma.