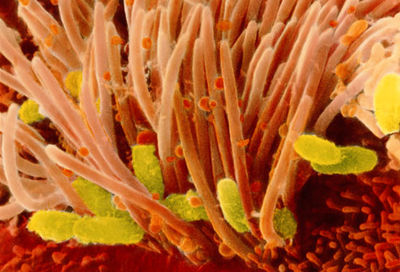 Haemophilus pertussis inside a lung[2]

Pertussis, more commonly known as “whooping cough,” had its first epidemic in Paris, France in 1578. Thomas Sydenham named it “pertussis,” meaning “violent cough.” The organism that causes this disease is called Heamophilus pertussis or Bordetella pertussis. It was first isolated in 1906 by Jules Bordet. B. pertussis is an aerobic, non-spore forming, Gram-negative ccoccobacillus bacterial pathogen that is strict to infecting and residing in the mouth, nose, and throat of humans[4][5].

There are four important steps relating to infection, colonization, and disease due to B. pertussis: (i) attachment, (ii) evasion of host defenses, (iii) local damage, and (iv) systemic manifestations. Infection is initiated by the attachment of B. pertussis to the cilia of epithelial cells of the upper respiratory tract with the aid of protein adhesins. Evasion of host defenses is facilitated by adenylate cyclase toxin (CyaA) and PT. Specifically, CyaA enters neutrophils and catalyzes the excessive production of cAMP, which intoxicates the cells such that phagocytosis is compromised. Like CyaA, PT also adversely affects phagocytosis and killing of organisms by inhibiting migration of lymphocytes and macrophages to areas of infection. Local tissue damage of the ciliated epithelial cells may be due to TCT, DNT, and perhaps CyaA. Systemic manifestations results in the common clinical features exhibited by pertussis patients[4].

B. pertussis's infectious dose is < 100 CFU [7]. The incubation period is 7-10 days long with the exceptions of household secondary cases being 28 days longer than primary cases [4].

B. pertussis is still common in areas where vaccinations are low. It is endemic to the United States. About 48.5 million yearly cases are reported worldwide, and about 295,000 deaths [4]. Before vaccines were existent, the average reported incidence of pertussis cases was 157 out of 100,000. There were epidemic cycles every 2-5 years. After vaccines become available, the reported amount decreased by 150-fold (0.5-1.0 per 100,000. However there is now a slight increase to 3 per 100.000. During the period from 1997 to 2000, there were 62 reported pertussis deaths in the United States. Research also show that pertussis cases occur among females more than males. This disease seemed to not vary among races very much. However, there are studies that claims that the disease occurrence is related to seasons and geographic areas [4].

Filamentous hemagglutinin (FHA) is required for B. pertussis’s tracheal colonization. To make sure the tracheal colonization is persistent, the assistance of Fimbriae (FIM) is also available. This is required for protective immunity to infections[6]. B. pertussis inhibits T-cell proliferation to exogenous antigens in vitro in an FHA-dependent manner. Interactions of FHA with receptors on macrophages results in suppression of the proinflammatory cytokine, interleukin-12 (IL-12), via an IL-10 dependent mechanism [4]. Both FHA and FIm are some of the main components of the acellular pertussis vaccines [6].

The primary component of pertussis vaccines is the Pertussis toxin (PT), which is associated with pertussis-associated lymphocytosis. Adenylate cyclase (CyaA) acts as an anti-inflammatory and antiphagocytic factor during infections. Other toxins include Type III secretion, dermonectrotic toxin, and tracheal cytotoxin [6].

The LPS of Bordetella pertussis is pyrogenic, mitogenic, and toxic and can activate and induce tumor necrosis factor production in macrophages[5]. Locus wlb consists of 12 genes that are required for LPS biosynthesis [4].

A siderophore, called Alcaligin, complexes iron internally through outer membrane receptors. This is important for B. pertussis’s survival in its host [6]. 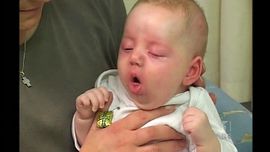 The illness usually could last 6-12 weeks [5]. According to CDC, clinical course of the illness is divided into three stages: catarrhal, paroxysmal and convalescent [8].

Catarrhal symptoms are indistinguishable from those of minor respiratory tract infections[8]. These could be rhinorrhea, lacrimation, and mild coughing[5]. The cough, which is initially intermittent, becomes more frequent over a 7-14 days period, which leads to being more paroxysmal. During the second week of the sickness, paroxysms occurs with more intensity. Eventually paroxysms terminate with inspiratory whoops and can be followed by posttussive vomiting. In conjunction with a paroxysm, cyanosis, bulging eyes, protrusion of the tongue, salivation, lacrimation, and distention of neck veins may occur [4][8].

The classical method for identifying pertussis is to culture a nasopharyngeal sample. Yet, this method is not preferred due to the disease’s nature to disappear early in its process [1]. It is difficult to get an early diagnosis in adults due to the fact that intense coughing could be a result of other factors such as asthma, smoking, GERD, and medical treatments. It is also difficult to detect in young children unless severe symptoms like coughing occurs before vaccination. The most useful test for a diagnosis of a Bordetella pertussis infection is bacterial DNA tests performed on a nasal swab or wash specimen [3]. Other methods include antigen detection by direct fluorescent antibody and PCR [1].

Diagnosis can also be done serologically through complement fixation, agglutination tests, toxin neutralization, and enzyme-linked immunosorbent assay. The last method being the most commonly used today [1].

Another quick test consists of using monoclonal antibodies against the bacterium’s virulence factors: lipo-oligosaccharide and peroxidase conjugate. The test dries cells of Bordetella pertussis in a formalin-saline onto a nitrocellulose disk, the disk is placed in a filtration device, and then the monoclonal antibodies are added. Afterwards, disk is washed in a peroxidase substrate solution and Bordetella pertussis is identified using a direct fluorescent-antibody assay [5].

Apnoeic or cyanotic cases of infants under 6 months should be taken care of in hospitals. Any suspicion of symptoms of whooping cough should be a sign to excuse children from school and receive antibiotic treatments within 3 weeks of illness. Clarithromycin and azithromycin are the preferred antibiotics for babies from birth to 1 year old. Adults can also take these antibiotics. However, co-trimoxazole can be used if the individual who cannot tolerate macrolides. Pregnant women who already has the disease are treated with erythromycin to prevent transmission to infant. Spasms are treated with mild sedation, and cyanosis is treated with administration of oxygen. [2]

The key to preventing pertussis is vaccination, in infants as well as teenagers and adults. Booster vaccinations were recommended by the Advisory Council on Immunization in 2006 to increase immunity. Many developed countries now administer the DTap vaccine, which is less reactogenic than the previous vaccine of DTP, to reduce pertussis and its circulation among human populations [4]. Pregnant women are also vaccinated a month before giving birth to decrease the chances of the infant getting infected [3]. Primary vaccinations today are presented as pertussis antigens contained in pentavalent childhood vaccine, administered as a “before preschool” immunization requirement [1].

First of all, the host (our bodies) will initiate and perform through the innate immune response. B. pertussis's LPS can trigger an immune response. Host defense peptides such as beta-defensins represent major components of innate immunity. A study was conducted to investigate the role of porcine beta-defensin 1 (pBD-1), a porcine defensin homologue of human beta-defensin 2 in pigs, in conferring protection against respiratory infection with Bordetella pertussis. Protection was associated with the expression of pBD-1 in the upper respiratory tract. In fact, pBD-1 expression was developmentally regulated, and the absence of pBD-1 was thought to contribute to the increased susceptibility of newborn piglets to infection with B. pertussis. Results demonstrated that the human host defense peptides play an important role in protection against pertussis and are essential in modulating innate immune responses against respiratory infections [9]. The adaptive immune response also plays its part in fighting pertussis. Enriched T cells or purified CD4+ T cell (specifically T Helper I cells) can sustain a high level of protection. [10].

Written by Teresa Vu, student of Tyrrell Conway at the University of Oklahoma