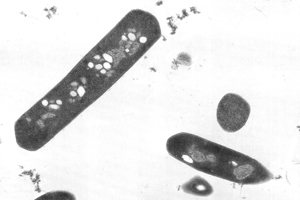 Because of its tolerance to high levels of solar radiation in its hypersaline environment, results show that homologous recombination plays a key role in cellular response of Halobacterium sp. NRC-1 to UV damage and repair. NRC-1 has had many studies conducted for its adaptation to extreme conditions. Ultraviolet radiation from sunlight can ultimately damage DNA by causing Thymine-Thymine dimmers to be formed which will result in mutations in the DNA. (7) Thus, Halobacterium NRC-1 has learned to adapt to these harsh environments they live in by constructing very active DNA repair systems. One such commonly used is called Photoreactivation. An enzyme, Photolyase is known to be acquired to reverse the Thymine-Thymine dimmers which use visible light to repair the DNA damage done by UV light. (7) They also contain large quantities of red Carotenoids which have been studied to be photoprotective. (7) Halobacterium sp. NRC-1 possesses nucleotide excision repair genes uvrA, uvrB and uvrC as well as multiple DNA repair pathways which probably explains for its high UV resistance. Further studies explain that these three nucleotide excision repair genes are required for the removal of UV damage in Halobacterium sp. NRC-1. High salt environments were also found to protect the cells and DNA against gamma irradiation. Thus, the hypersaline environment in which Halobacterium sp. NRC-1 can survive is a crucial factor for its resistance to desiccation, damaging radiation and high vacuum. All these may be due to efficient damage tolerance mechanisms such as recombinational lesion bypass, bypass DNA polymerases and the existence of multiple genomes in Halobacterium.

The genome of Halobacterium sp. NRC-1 contains a large gene cluster—gvpMLKJIHGFEDACNO, which is necessary for the production of buoyant gas-filled vesicles (GVs) for the cell. GVs in their intracellular structures are purely protein, unlike standard membranes that also contain lipids. These gas vesicles are filled with air, thus helping them to float to the surface of masses of water. They also increase the availability of light and oxygen to the cells since they are closer to the surface and closer to sunlight. Cells appear pink and opaque and float to the top when gas vesicles are present. When these gas vesicles are absent, cells appear more red and translucent and sink to the bottom. (7) The presence of five new gas vesicle proteins, GvpF, GvpG, GvpJ, GvpL and GvpM, were discovered recently which brings the total number of proteins to seven. GvpJ and GvpM were found to be similar to the old GvpA protein. GvpF and GvpL proteins were found to contain coiled-coil domains. Cloning of the major GV protein has led to the discovery of pNRC100, which is important for GV synthesis. By using pulsed-field gel electrophoresis, studies showed a large inverted repeat (IR) sequence in the pNRC100. By Southern hybridization analysis using two restriction enzymes AFlII and SfiI, the inversion isomers of pNRC100 were demonstrated. This was done by cutting asymmetrically in between the single-copy region of AfiII region and the large single-copy region of SfiI, but not within the large IRs. By doing so, no inversion isomers were detected, which concluded that both copies were required for inversion to occur.