A Microbial Biorealm page on the genus Halococcus 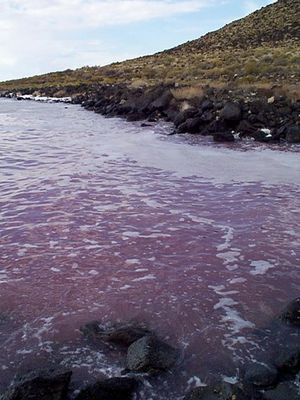 Halococcus is a genus of extreme halophilic archaea, meaning that they require high salt levels, sometimes as high as 32% NaCl, for optimal growth. Halophiles are found mainly in inland bodies of water with high salinity, where their pigments (from a protein called rhodopsinprotein) tint the sediment bright colors. Rhodopsinprotein and other proteins serve to protect Halococcus from the extreme salinities of their environments. Because they can function under such high-salt conditions, Halococcus and similar halophilic organisms have been utilized economically in the food industry and even in skin-care production.

Halococcus' genome has not been sequenced yet, although studies of its 16s rDNA have demonstrated its placement on the phylogenetic tree. Due to the organisms' potential longevity, Halococcus may be a good candidate for exploring taxonomic similarities to life found in outer space. 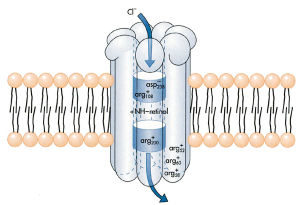 Example of chlorine pump within a Halcoccus cell.Image from Raven and Johnson's Biology, Sixth Edition.

Halococcus is able to survive in its high-saline habitat by preventing the dehydration of its cytoplasm. To do this they use a solute which is either found in their cell structure or is drawn from the external environment. Special chlorine pumps (see diagram) allow the organisms to retain chloride to maintain osmotic balance with the salinity of their habitat. The cells are cocci, 0.6-1.5 microns long with sulfated polysaccharide walls. The cells are organtrophic, using amino acids, organic acids, or carbohydrates for energy. In some cases they are also able to photosynthesize. 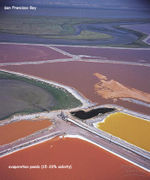 Salt evaporation ponds in San Francisco Bay; the bright colors are caused by the pigmentation found in proteins of Halococcus. Image from University of Miami Department of Biology.

Halococcus is found in environments with high salt levels, mainly inland bodies of salt water, but some may be located in highly salted soil or foods. The pigmented proteins in some species cause the reddish tint found in some areas of the Dead Sea and the Great Salt Lake, especially at the end of the growing season. When under cultivation, the organisms grew best under high salinity conditions.