A Microbial Biorealm page on the Haloquadra 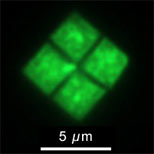 (According to recent literature (Maturrano et al., "Microbial Diversity in Maras Salterns, a Hypersaline Environment in the Peruvian Andes"), the genus of Haloquadratum walsbyi has been changed to Haloquadra. Thus, the name of this article, as well as the name of the species being referenced, have been changed accordingly.)

The archaeon with the proposed name Haloquadra walsbyi ("salt squares of Walsby") was first discovered in 1980 by A.E. Walsby in the Gavish Sabkha, a coastal brine pool in the Sinai peninsula, Egypt. The "square haloarchaea of Walsby" were notable because of their extremely thin (around 0.15 μm), square-shaped structure. While this archaeon was discovered in 1980, it was not successfully cultivated in the lab until 2004; before then it had been considered to be an unculturable organism. In the attempts to culture Haloquadra walsbyi, a new member of the Haloarcula genus, Haloarcula quadra, was isolated. Haloquadra are interesting to scientists because of their unique shape, their motility, and their relative abundance in halophilic habitats, possibly signifying an important ecophysiological role. 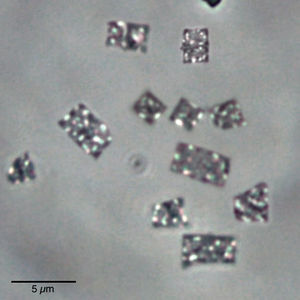 Haloquadra walsbyi has a unique cell shape--that of an extremely thin square, its best-known characteristic. The cells possess an abundance of intracellular refractile bodies known as gas vacuoles- vacuoles filled with gas which provide buoyancy- maintaining upper position in the water column. Individual square cells are joined with others to form large sheets, sometimes as large as 40 microns. These sheets are extremely fragile and the connections between the cells are easily broken.

The cells are motile by flagella, of which they can have anywhere between one and several located all over the cell surface. The flagella rotate clockwise to propel the cell forward; counterclockwise to move in reverse. Its mode of metabolism is not completely known; complete genetic information will give researchers necessary insight.

Haloquadra walsbyi was first noticed and taken from saline pools in Egypt, but it can be found in hypersaline bodies of water all over the world. Evaporation of water in these pools leaves high concentrations of salt, making for Haloquadra walsbyi's optimal growth environment. According to Bolhuis et al., "In this sense, they are the most hyperhalophilic organisms known, as further concentration of the magnesium salts (bitterns) leads to sterility of the brines." Their precise role in the ecosystem is not known for sure, but because of its unique morphology learning more about it will surely provide some information on the evolution and morphological adaptation of archaeans.

Images of the 2D, square sheets formed by the joining of Haloquadra walsbyi cells. Image from Nature(London) by Kessell and Cohen, 1982.

Dyall-Smith, Mike. The Square Haloarchaea of Walsby--one of the weirdest extremophiles. Department of Microbiology and Immunology, University of Melbourne.