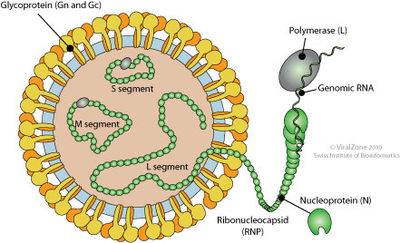 Hantavirus Pulmonary Syndrome (HPS) and Hemorrhagic Fever with Renal Syndrome (HFRS) are illnesses associated with the Hantavirus.[1] HFRS was first linked to Hantavirus in 1978 in Korea.[2] HFRS causing species are mainly located in Europe, Asia, and Africa. In 1993, the Sin Nombre species of Hantavirus was the first species discovered in the Four Corners region of the United States that caused the HPS illness, which is most prevalent in that area.[3] HPS causing species are found in the United States and Central and South America.These antigenically distinct viruses are extremely host adapted usually to one or a few rodent hosts. The viruses are ingested by humans who come into close contact with rodents that are carriers of one of the human infecting species. It is thought that aerosolized virus particles from rodents were the only form of transmission, but there is one documented case of human to human transmission in Argentina. [4] This makes Hantavirus different from other viruses in the family because the other species use arthropods as their carrier. Humans are not considered a natural host for Hantavirus because they are a dead end to its spreading. These illnesses are characterized by fluid build up in the lungs (HPS) and renal damage (HFRS). In the most severe cases, the illnesses can be fatal and there is no treatment to specifically fight against the virus. Few species have a fatality rate greater than 50 percent, while most species have a mortality rate of less than 10 percent. [5] Generally, HPS is a more lethal disease than HFRS. Not all species of Hantavirus have been associated with human disease.

The Hantavirus is one genus of the Bunyaviridae Family in the Group V Negative sense ssRNA.[6] There are about twenty species of Hantavirus documented around the world.

A characteristic of Bunyaviridae viruses includes three segmented strands of linear RNA genes. There is a S strand, M strand, and L strand. These strands are incapsulated by a spherical lipid envelope, which also encloses four viral proteins. The S strand encodes for the nucleocapsid protein. The M strand codes for the surface glycoproteins, G1 and G2. Finally, the L strand codes for the RNA dependent RNA polymerase. 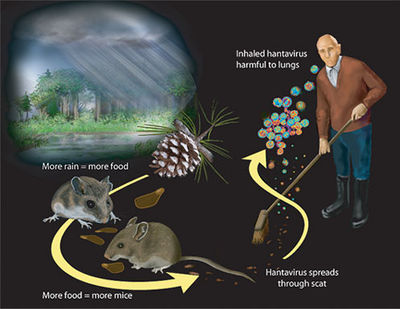 Basic course of transmission From: Possibilistic.org [3]

Most of the species of Hantavirus live in rodents without causing symptoms. These carrier rodents then pass along the virus to humans through their feces, biting, and interaction in general. Once a virus is within a human, the disease that will develop depends on which continent the person, the rodent that passed the virus along, and the virus that has made the rodent its host. The full pathogenesis of the genus Hantavirus in humans is not fully understood. However, there are some discoveries that start to paint the picture of the virus’s path in the body. The virions reproduce in macrophages and vascular endothelial cells. The host cells are not lysed once reproduction has occurred, and infected endothelial cells do not undergo programmed cell death or increase in vascular permeability. This data suggests that the permeability increase and vascular dysfunction in patients with HFRS and HPS may be induced by the antiviral and immune responses to infected cells. It can be safely assumed that because these viruses adapted to specific rodent hosts that their pathology in humans be different for HFRS and HPS causing viruses. However, it is unknown why one virus causes a a particular illness. Studies of HFRS afflicted patients have indicated interstitial immune cells and hemorrhaging in the renal tissues. HPS lung studies have revealed that viral antigens are well distributed throughout the lungs and peripheral lymphoid organs. Also, lungs afflicted with HPS have been described as dense, rubbery, and weighing twice as much as a normal lung due to liquid build up from dilation of capillaries.

Viral replication begins with endocytosis after the virus attaches to host receptors through Gn-Gc glycoprotein dimer. After the virus membrane fuses with the vesicle membrane, ribonucleocapsid segments are distributed into the cytoplasm. The gene segments are then transcribed and capped in the cytoplasm. When enough nucleoprotein is present to encapsidate the newly formed antigenomes and genomes, replication begins. Virions are released when ribonucleocapsids move under the plasma membrane and buds.

The species that cause severe HFRS are the Hantaan, Dobrava, and Amur virus infections. There are usually five stages in the severe cases: febrile, hypotensive/proteinuric, oliguric, diuretic, and convalescent. More mild forms of the illness may not express each stage or have symptoms in different stages. General symptoms of HFRS include: fever, chills, prostration, headache, backache, nausea, vomiting and abdominal pain, rash, and possibly a type of temporary visual impairment. All these symptoms may not show through in each person afflicted. The prodromal stage may last up to a week, and most of the symptoms that develop are renal signs. The first stage that presents severe symptoms is the proteinuric stage. Nausea, vomiting, acute shock, and hypotension may occur in this stage. The following stage is the oliguric, and kidney function improves in the stage that follows, the diuretic stage. Death is most common in the oliguric stage, and some severe cases result in kidney failure. The hemorrhagic part of the disease name comes from petechiae, hematuria, and melena that may develop in more severe cases. Recovery takes weeks if not longer, but most people attain full kidney recovery while a few rare cases may have chronic renal failure.

HPS affects the lungs instead of the kidneys of those infected by a Hantavirus species. Fever, headache myalgia, chills, dizziness, vomiting, and other symptoms are common for the initial phase, which lasts for 3 to 5 days. The illness takes a severe turn when hypotension and respiratory distress appear suddenly. A cough and tachypnea develop before pulmonary edema and signs of hypoxia. Cardiac abnormalities might present such as myocardial depression, and after that the illness usually gets worse. Hospitalization may be required along with ventilation. Kidney disease and hemorrhagic signs might develop but are often quite mild. Recovery happens quickly, and usually full lung recovery is attained. However, convalescence may persist up to months after affliction.

Diagnosis of either of these two illnesses is difficult because of the limited number of cases that present each year. Usually, diagnosis is obtained by a review of symptoms and knowledge of exposure to rodents. Serological tests are also used to obtain a diagnosis. They look for IgM or a rise in titer of IgG in the body during infection. Finally, some immunohistochemistry infections can be diagnosed by finding antigens.

There is not a specific treatment that kills the infecting virus for either HPS or HFRS. Supportive therapy is the main course of action when a patient is in the hospital. For patients with HPS, mechanical ventilation may be used, and dialysis may be required for patients with HFRS. Keeping patients hydrated and nourished with electrolytes decreases chances of the diseases severely harming the patient.

There is no fully effective vaccine available for either HPS or HFRS. However, preventative measures can be taken to prevent infection. Reducing contact with rodents as much as possible is the best course of action. Sealing cracks in homes, using rodent traps, and denying rodents a food source are all effective ways of reducing exposure to the viruses.[7] If contact with rodents is inevitable, make sure all body parts are covered when handling rodents or their feces. A mask or way to block or filter the air around the rodent or feces would greatly reduce the chances of being infected.

The Hantavirus infection in the body produces several responses from the host immune response. The Classical and alternative complement pathways are activated, and antigen presenting cells experience increased production. The number of total Ig expressed increases dramatically. A current theory is that the increased IgE levels around the infected area produce the increased vascular permeability. Cytokines and chemokines are also implicated in the increase in vascular permeability. HFRS and HPS trigger different cytokines and chemokines in their host immune response. Both chemicals are known to increase vascular diameter, and there is a correlation to the amount of cytokines and chemokines to the severity of each illness. It is also assumed that natural killer cells migrate to infected sites as well. Cytotoxic CD8 T cells are the primary form of clearing the virus, but it may also play a part in the pathogenicity of the illness.

Created by Michael McCoy, student of Tyrrell Conway at the University of Oklahoma.