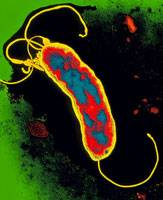 Helicobacter hepaticus ATCC514459 is a Gram-negative, spiral (anywhere from one to seven spirals) shaped bacteria. It is usually between 0.2 to 0.3 µm in diameter and 1.5 to 5.0 µm long. It is a microaerophilic organism since it requires oxygen to live, but can live in environments that contain less oxygen than atmospheric levels. Like other species of Helicobacter, Helicobacter hepaticus can be found in the mucosal layer of the gastrointestinal tract or in liver tissue. In mice, it has been found to cause chronic hepatitis, liver cancer, and inflammatory bowel disease. Its importance in humans is not fully understood yet. (EMBL-EBI)

Helicobacter hepaticus was first isolated from hepatic tissue by when a spiral bacterium was able to be cultivated on blood agar plates incubated at 37ºC under anaerobic or microaerobic conditions. Ultrastructural morphologic examination, biochemical characteristics examination, and 16S rRNA gene sequencing were all used to characterize Helicobacter hepaticus. (Rice 129-30)

Helicobacter hepaticus has a strong urease activity. Urease is an enzyme that catalyzes the hyrdolysis of urea into bicarbonate and ammonia, both of which neutralize gastric acid and therefore allows the bacteria to colonize the acidic environment that the gastrointestinal tract can be. Helicobacter hepaticus tests positive in both oxidase and catalase tests. The oxidase test shows the presence of cytochrome c oxidases which show that a cell would be capable of using oxygen to produce energy via an Electron Transport Chain. The catalase test further proves this ability since catalase is an enzyme that decomposes hydrogen peroxide (a Reactive Oxygen Species) into water and oxygen. Helicobacter hepaticus can also gain energy anaerobically by reducing different compounds. It can reduce sulfur and produce hydrogen sulfide (H2S) and it can also reduce nitrate to nitrite. Helicobacter hepaticus is sensitive to the antibiotic metronidazole which kills anaerobic bacterium. It is resistant to the antibiotics nalidixic acid and cephalothin. (Rice 129-31))