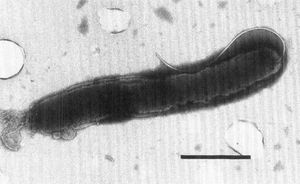 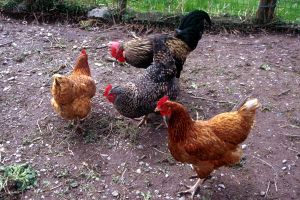 Helicobacter pullorum is a gram-negative bacteria in the genus Helicobacter. The cells are bacilli with a slight curve. They are typically 3-4 micrometers in length, and 0.3-0.5 micrometers in width. This bacteria species was discovered from chickens, seen in Figure 2, specifically broiler and laying types, and has also been found in humans diagnosed with gastrointestinal disease. H. pullorum thrive in an environment of 37-42 °C and are therefore classified as mesophiles, in the higher end of that temperature range. They grow in microaerobic conditions and are non-spore forming. H. pullorum can also be classified by its response to certain tests. The species is negative for indoxyl acetate esterase, urease and alkaline phophatase production. It tests positive, however, for catalase production. [1]

According to a whole genome shotgun sequencing project on Helicobacter pullorum, attained by NCBI, H. pullorum has a circular genome consisting of 1,919,070 nucleotides with a known sequence. The DNA codes for 2044 genes, 2008 of which are protein coding and 36 of which are structural RNAs. 33% of the genome consists of GC pairings.

Very little is known about the pathology of H. pullorum. There is a lack of evidence as to whether the bacteria is harmful to its host. It is known to grow primarily in the intestinal tract of chickens, but has also been found in the feces of humans. A study conducted in 2005 showed that H. pullorum was present in roughly the same percentage of fecal samples from patients with gastrointestinal disease (4.3%) as there were in healthy patients (4.0%). This does not necessarily mean that H. pullorum is not a potential cause of gastrointestinal disease. It could be that, like many bacteria, there are strains of H. pullorum that are virulent, while others are not. This is supported by a study conducted in 2000 that showed that H. pullorum can produce cytolethal distending toxin, which is a potential virulence factor that may or may not be a direct cause of diarrhea. The effects of cytolethal distending toxin, including cytoplasmic distension and nuclear enlargement, are seen in Figure 3. [8]