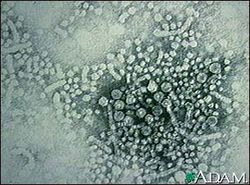 Also known as serum hepatitis, Hepatitis B spreads through blood and sexual sexual contact. It is seen with increased frequency among intravenous drug users who share needles and among the homosexual population. The incubation period is between 45 to 120 days. Hepatitis B virus cannot be cultivated in tissue culture, which has hindered investigations on the virus. Only humans and chimpanzees are susceptible to Hepatitis B virus.

Hepatitis B viral infection is one of the most common persistent viral infections in humans. In the United States alone, 15000 to 45000 newly infected individuals are identified every year. The reported incidence has fortunately declined by 70 % since 1987.

The genome of hepatitis B virus is -RT, contains a single molecule of circular and is not segmented. The genome is partially double-stranded DNA that forms a covalently closed circle with 5' end of the full length minus strand which is linked to the viral DNA polymerase. The complete genome is 3020-3320 nucleotides long (for the full length strand) or 1700-2800 nucleotides long (for the short length strand). The genome has a guanine + cystosine content of 48 %. The genome sequence has termini with cohesive ends that match the uniquely located 5'-ends of the two strands which overlap by approximately 240 nucleotides and maintain the circular configuration of the DNA. Complementary to the viral mRNA, the negative-sense or non-coding strand is full length; the viral mRNA, the positive sense strand, is shorter than full-length. The double stranded genome has a nick at a unique site on full length negative strand opposite at a position 242 nucleotides downsream from the 5' end of the positive strand. The 5' end of the negative-sense strand has a covalently attached terminal protein; positive sense strand has a 5' capped oligoribonucleotide pinner. The 3'-terminus has conserved nucleotide sequences; of 1 nucleotide in length. (source: ICTVdb Descriptions)

The virions of Hepatitis B virus are 42 nm in diameter and possess an isometric nucleocapsid, the core, of 27nm in diameter, surrounded by an outer coat approximately 4 nm thick. The protein of the virion coat is known as "surface antigen" or HBsAg. The surface antigen is sometimes extended as a tubular tail on one side of the virus particle. Produced generally in vast excesses, it is found in the blood of infected individuals in the form of filamentous and spherical particles. Filamentous particles are identical to the virion tails in that they vary in length and have a mean diameter of about 22nm. They sometimes display regular, non-helical transverse striations. (source: Electron Micrograph Images: Virus Ultra Structure)

The viral membrane fuses with the cell membrane, releasing the core into the cytoplasm after the Hepatitis B virus has attached to the cell surface receptor, which is yet to be identified. The core proteins dissociate from the partially double stranded DNA. The DNA is now completed with the DNA polymerase providing it the double-strand structure. This is done by the virally-encoded polymerase in the cytoplasm that is one of the core proteins whereas the cell's DNA polymerase is in the nucleus. The double stranded DNA enters the nucleus and the ends are ligated by host enzymes so that the virus is in the form of a circular episome. When the viral DNA associates with host nuclear histones, it is transcribed by cellular RNA polymerase II into mRNAs.The DNA form of Hepatitis B virus is found as an independent episome as opposed to being integrated into cellular DNA, as is the case with retroviruses. This is because hepadnaviruses have no integrase activity. However, integrated parts of the Hepatitis B virus genome are found in the chromosomes of many hepatocellular carcinoma patients.

Virus particles that contain RNA or DNA at various stages of replication can be found in the bloodstream, suggesting that nucleic acid replication is not tightly controlled with the passage out of the cell. Furthermore, empty envelopes containing the envelope proteins embedded in a lipid layer are continually being shed. (source: Microbiology and Immunology Online: University of South Carolina)

It has become clear that Hepatitis B virus is not spread exclusively by blood and blood products. The virus is infective by mouth under certain circumstances. It is endemic in mentally handicapped homes, prisons and other such closed institutions. The virus is also found in semen, vaginal discharge, breast milk and serous exudates such as the CSF and these have been implicated as possible vehicles of transmission. The presence of Hepatitis B virus has also been reported in urine, faeces, bile, sweat and tears but has not been confirmed yet. The membranes of the eye or mouth could also be possible routes of transmission of the virus. All biological fluids from a Hepatitis B infected individual must be treated as potentially infectious. Although HBsAg has been detected in mosquitoes and bed bugs, there is little evience to suggest the possibility for replication of the virus in these insects. Although mechanical transmission of infection must be a possibility, the role of anthropod vectors is uncertain.

Hepatitis B virus infection does not appear to be related to genetic factors and does not reflect maternal or veneral transmission, although clustering does occur within family groups. The virus does not normally infect the fetus but the baby is at risk of infection during birth.The risk of transmission to the fetus may reach 50-60%, though it varies from country to country and appears to be related to ethnic groups. The risk of perinatal infection is substantial if the mother had acute hepatitis B in the second or third trimester of pregnancy or within two months of delivery. The mechanism of perinatal transmission is uncertain but it probably occurs during or shortly after birth as a result of a leak of maternal blood into the baby's circulation or of its ingestion or inadvertent inoculation. Most children infected during the perinatal period become persistent carriers. 70 - 90 % of infants born to e +ve mothers become carriers.

Hepatitis B infection is found worldwide but the prevalence varies enormously between different countries. Estimates suggest that one-half of the world population has experienced infection and there are 350 million chronically infected individuals. Hepatitis B is responsible for 1.5 million deaths every year. Around 40% of chronically infected individuals die as a result of their infection. The mechanism for maintaining the high prevalence rate in some countries appears to be the high carrier rate and the rate of high prinatal infection. Infection in infancy is very common, particularly acquired from the carrier mothers at birth, in high prevalence areas. The possibility for someone to be a persistent carrier is greater if the infection occured earlier in life. The result is that the carrier rate in the adult population is 10 - 20 % and almost all the remainder of the population is immune. Infection is also common in childhood but is usually horizontal between children in areas of intermediate prevalence. African Hepatitis B virus carrier mothers are less likely to be e +ve than their Oriental counterparts and thus less likely to transfer Hepatitis B virus perinatally. The carrier rate in adults is 2 - 10 % and a quarter to half the population is immune. Infection is rare in childhood in low prevalence areas, the carrier rate is low (0.1 - 0.5 %), with a low prevalence of natural immunity in the general population being in the order of 2 - 6 %.