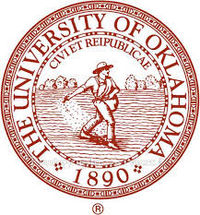 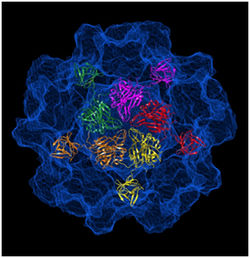 HEV consists of a positive-sense, single-stranded RNA molecule that contains three distinct open reading frame. The HEV genome is arranged in three overlapping open reading frames (ORF) (ORF1, ORF2, ORF3). The three coding frames are used to express different proteins which help to regulate the host cell environment. ORF1 encodes a polyprotein that undergoes post-translational cleavage into multiple nonstructural proteins required for virus replication, including a methyltransferase, a putative papain-like cystein protease, an RNA helicase and an RNA-dependent RNA polymerase. ORF2 is located at the 3’-end of the genome and encodes the principal structural protein, the capsid protein. ORF3 begins with the last nucleotide of ORF1 and encodes for a small immunogenic 123 amino acid phosphoprotein which associates with the cytoskeleton, suggesting its possible role in the assembly of virus particle.[12 Its important to note that ORF3 is also very important in HEV pathogenesis due to its three broad functions which are.One is promotion of cell survival. It does this by binding and therefore activating MAP kinase and inactivating its cognate phosphatase. Another function of ORF3 is modulation of the acute phase response by localizing to early and recycling endosomes, and inhibiting the movement of activated growth factor receptors to late endosomes. Lats ORF 3 causes an immunosuppression reaction in the host cell. Its able to do this by promoting the secretion of α1-microglobulin, an immunosuppressive protein that could act in the immediate vicinity of the infected cell. [13]

Almost always transmission of HEV occurs fecal-oral through contaminated water and food.This is the cause of the epidemic episodes that occur in developing countries, usually through the use of a common infected water source in the community thats affected. Sporadic, singular cases do occur, but usually in developed countries. These casses are uncommon and are ussualy due to the travel of the infected individual to a developing country where HEV is more common. These types of cases are rare, and not common. Although uncommon and not usually associated with the characteristics of transmission of HEV studies have also found the rare but possible zoonotic transmission of HEV. For example one study reported direct transmission from deer to human by the consumption of raw deer meat.[14] Also genotyping data indicate clustering of swine and human HEV strains from patients in the USA, Japan and other countries The zoonotic transmission of HEV is a serious issue in developed countries. Though a majority of infections are asymptomatic, sustained transmission can lead to the evolution of virulent strains in future. [13] The Incubation period of HEV is 15 to 60 days with a mean of 40 days.[11] The infections may be asymptomatic 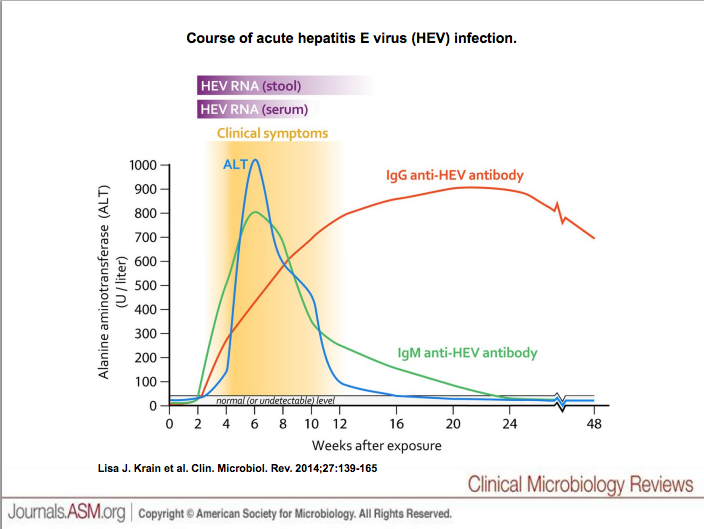 The host immune response can be broken down into two parts, the humoral and cellular immune responses to HEV, and the antibodies produced in response infection. Incubation period of HEV usually lasts roughly 4 to 6 weeks from infection to onset of symptoms. Figure 1 helps to better understand the host immune response to HEV. ALT(depicted in blue on the figure) is serum of alaine transaminase that is found in the body. If the liver is damaged or not functioning properly, ALT is released into the blood causing ALT levels to increase. So blood could be drawn and tested for ALT levels. This test is used in clinical settings to evaluate liver function.We know that the onset of clinical symptoms of HEV greatly affect the liver, causing inflammation (). So this would result in a sharp rise of serum alanine transaminase (ALT) levels. Symptoms may persist for a few weeks to a month or more. ALT levels return to normal during recovery time.
The host produces two isotypes, IgG and IgM, antibodies in response to HEV infection.IgG has many functions while IgM antibodies function to activate the classical compliment cascade mechanism of the inmate immune response. IgG can be found throughout the body, while IgM can be found in the blood stream. As we see in figure one Anti-HEV IgM increases rapidly and then slowly decreases over the weeks after infection occurs. On the other hand, anti-HEV IgG antibody continue to rise, even during the recovery period, when IgM is decreasing. We can see that detectable anti-HEV IgG may persist for months to years.[15