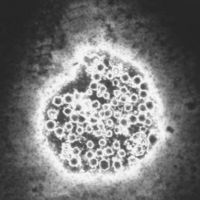 Hepatitis A is an acute disorder and is often followed by a relapse for a few weeks. It is the causative agent of infectious hepatitis. Although children are more likely to contract hepatitis A than adults, the symptoms are usually much milder than those of adults. 90% of the childhood infections are asymptomic. Children who go to day-care centers, troops living under crowded conditions, people living in heavily populated and unsanitary conditions, people that practice oral and anal sex and tourists visiting an area where hepatitis A is common are at highest risk for hepatitis A. The incubation period for hepatitis A is from 10-50 days and fever and jaundice are the main symptoms. Although a few cases permanent liver damage, 99% cases recover completely and the fatalities are less than 0.1%.

Hepatitis A virus normally causes an acute self-limiting infection that does not progress to a chronic phase, and manifestations of disease are generally restricted to the liver. A good vaccine is now available for protection of travellers to endemic regions where the standard of hygiene is poor. (source: Internet FAQ Archives)

The genome structure is not segmented and contains a single molecule of linear positive-sense, single stranded RNA. The complete genome is 7500 nucleotides long and is fully sequenced. The sequence has the accession number M14707. The 5'-end terminal sequence has hairpin structures; 5'-end of the genome has a genome-linked protein VPg. The 3'-terminus has a poly (A) tract. The viral genome encodes structural proteins.

Virion Structure of a Hepatitis A Virus

The virions of a hepatitis A virus consist of a capsid. . The virus capsid is not enveloped and round with icosahedral symmetry. The isometric capsid has a diameter of 27nm. The capsid consists of 12 capsomers and appears round.

Capsids can be penetrated by stain and some appear dark in the center. Incomplete particles are common. They are devoid of nucleic acids characterized by capsids with dark centers in negative stain peparations.

Reproductive Cycle of a Hepatitis A Virus in a Host Cell

Hepatitis A occurs endemically in all parts of the world and it is difficult to estimate the exact incidence because of the high proportion of subclinical infections. At least 1.5 million new cases are reported each year. The actual incidence in developed countries is decreasing but the infection is almost universal in developing countries. A faecal-oral pathogen, hepatitis A virus is transmitted particularly through the contamination of food and water. Many foodborne outbreaks can be traced to poor hygiene in infected food handlers who were shedding large amounts of virus during the incubation period.

All types of viral hepatitis have the same pathological changes with parechymal cell necrosis and histiocytic periportal inflammation. In cases of fulminant hepatits, on rare occasions, there is massive necrosis. Release by damaged liver cells results to an increased amout of liver enzymes such as AST and ALT. Eleation of these enzymes may be well be the only abnormality found in individuals with asymptomic and anicteric infections who are tested because of known exposure. In cases of symptomatic infections, serum biliburin may be elevated and bilirubin might be found in the urine. The leucocyte count is usually normal but sometimes atypical lymphocytes are seen.