Difference between revisions of "Herpesviridae" 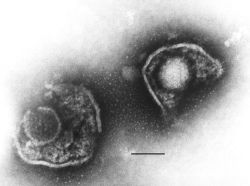 The herpesviruses vary greatly in genomic sequence and proteins synthesized, but they all share similar genome and virion structures. (source: Weir, Roizman)