Difference between revisions of "Human Cytomegalovirus" Human cytomegalovirus (HCMV) is a member of the herpesvirus family that generally remains unnoticed in the human body, but can be severely pathogenic in immunocompromised patients [1]. HCMV can be transmitted by direct contact with bodily fluids such as saliva, tears, urine, stool, semen and breast milk [2]. As a species-specific disease, human cytomegalovirus can be found in all organs and bodily fluids, and therefore can lead to infection in developing infants (Figure 1). HCMV is found to be one of the leading congenital diseases affecting children by causing deafness, learning disabilities, and mental retardation [3]. Moreover, HCMV is capable of remaining latent after infection until death, and is responsible for different types of cancer, such as prostate cancer [4]. The seroprevalence of HCMV is similar to most sexually-transmitted viruses and impacts the elderly and those of lower socioeconomic status. More than half of HCMV prevalence is for individuals older than 6 years old, and prevalence dramatically increases as socioeconomic status decreases [5]. Current research is aimed towards developing a vaccine against HCMV, one that specifically induces deletions in the virus’ genome and prevents the virus from avoiding natural immunity development [6]. The direct relationship between HCMV and cancer remains undiscovered. Although researchers have identified which cell cycle mechanisms the virus modifies, there is still no evidence for direct causation of cancer [34].

The HCMV genome consists of approximately 230kb of linear double stranded DNA, making it the largest out of all the human herpesviruses [7]. The genome is split into a unique long (UL) and a unique short (US) region, both flanked by inverted sequences [7]. It contains approximately 150 open reading frames (ORFs) that encode proteins [8]. Out of these, it has been found that 41 are essential and 117 are nonessential for HCMV replication. Whether an ORF is essential or nonessential depends on the type of cell the virus is grown in, which suggests that ORFs may play a role in tissue tropism [8]. To date, most studies have been conducted on viral strains that are grown in cultures of human fibroblast (AD169 and Towne strain) and epithelial cells (Toledo strain). Only the AD169 strain has been fully sequenced [9]. A challenge of using these strains is that HCMV strains grown in culture lack up to 19 genes found in clinical isolates of HCMV virus [10]. After numerous passages, the viruses undergo deletions and recombinations in culture [10]. One study found that the published sequence for HCMV in the AD 169 strain lacks 929 base pairs affecting two genes (UL42 and UL43) that are nonessential for growth in culture [11]. Bacterial artificial chromosomes (BACs) have been used to create frozen clones of HCMV DNA, allowing for some standardization of the highly variable HCMV virus [12]. The sequencing of CCMV, the chimpanzee cytomegalovirus, was obtained in 2002. CCMV is only moderately diverged from HCMV, as demonstrated by their similar GC contents. While the AD 169 strain of HCMV has a GC content of 58%, CCMV has a GC content of 62% [13]. By comparing CCMV to the published HCV sequence, 51 previously proposed ORFs have been discounted and 10 novel genes have been proposed [13].

The human cytomegalovirus structure consists of an outer lipid bilayer envelope, composed of various viral glycoproteins, followed by the tegument, a proteinaceous matrix, which holds double stranded linear DNA core in an icosahedral nucleocapsid. The virion is usually spherical in composition [14]. The average size can range from 200 to 300 nanometers. The glycoproteins, including glycoprotein B (gB), gH, gL, gM, gN, and gO, are involved in cell attachment and penetration [14]. The tegument contains two major types of proteins, in addition to some cellular and viral RNA. One class of proteins serves a structural role and is integral in the assembly and disassembly of the virion during entry [14]. The other class modulates the host cell response to infection [14].

It has assumed for three decades that HCMV upregulates host cell metabolism and increases glucose uptake in order to promote oxidative phosphorylation to supply the virus with ATP [15]. However, this has been challenged by recent studies [16] which show that instead of passively relying on the host metabolic processes, HCMV has its own metabolic program and alters the host metabolic pathways for its specific needs. In HCMV-infected cells, there is an increased demand by the virus for nutrients, energy, and macromolecules [17]. The virus changes the way glucose and glutamine are metabolized [17]. In infected cells, glucose does not get completely broken down by the TCA cycle. Instead, glucose, in the form of citrate, gets diverted from the TCA cycle into use for HCMV fatty acid biosynthesis [17]. It is speculated that HCMV needs the extra fatty acids because it is an enveloped virus and needs them to form its membrane [17]. Inhibition of fatty acid biosynthesis is able to suppress HCMV replication and this information is being used to find molecular targets for antiviral therapy [16]. The infected cell is able to divert glucose into fatty acid biosynthesis because HCMV infection allows the cell to use glutamine for ATP production [18]. Normal human fibroblast cells die after glucose deprivation, while HCMV-infected fibroblast cells are able to survive by using glutamine [18]. Another modification by HCMV is the replacement of GLUT1, with GLUT4, a glucose transporter with much greater capacity [17]. The metabolic changes caused by HCMV may have an implication in oncogenesis and further study is needed to confirm this [17].

The Human cytomegalovirus is found in all organs in the human body, and is known for its ability to infect different types of tissues and cells. HCMV can infect endothelial, epithelial, smooth muscle cells, fibroblasts, neurons, hepatocytes, trophoblasts, phages, and dendritic cells [19]. This allows the virus at active phase to penetrate all layers of the human tissue while remaining undetectable.

Human cytomegalovirus, as a ubiquitous opportunistic pathogen, generally causes no symptoms in healthy individuals. However, viral infection is implicated in the development severe vascular diseases, as atherosclerosis, transplant vascular sclerosis, and coronary restenosis after angioplasty surgery, in immunocompromised adults and newborns with birth defects [20]. Contraction can occur via sexual transmission or non-sexual close contact with infected individuals, especially children. In children, infection occurs in utero, during delivery, through blood transfusions, breast feeding, or contact with other children excreting CMV [5]. Other methods of transmission include solid-organ transplantation and hematopoietic stem cell transplantation [14]. Infection has also been largely suggested as the cause of various neurological disorders including mental retardation, epilepsy, microencephaly, microgyria, hydrocephalus, and deafness. In a Sprague-Dawley rat model study of hippocampal neurons, there is an impact of HCMV infection on synaptic plasticity, leading to dysfunction of learning and memory [21]. In other cases, there can be neurodevelopmental consequences in even immunocompetent children diagnosed with HCMV infection, contracted congenitally or perinatally. This can include non-hereditary hearing loss and damage to the developing central nervous system [22].

Cytomegalovirus is the most common cause of intrauterine and perinatal infections worldwide. Newborn babies are particularly vulnerable to this infection during pregnancy, especially in the first trimester. Because about 90% of HCMV infected newborns are asymptomatic, researchers have stressed the importance of longitudinal monitoring, especially to neurodevelopmental signs and deficiencies, which is extremely valuable in detecting and analyzing the changes that occur throughout the child’s life [22]. A high prevalence of probable congenital CMV infection, rather than congenital CMV infection, is associated with asymptomatic conditions of most cases at birth and missed diagnosis or lack of suspicion of CMV infection. This finding has called for mandatory congenital CMV infection screenings during the neonatal period in order to detect signs of the disease as soon as possible, and to prevent complications in the future [22].

Identifying the best method of diagnosis helps when screening for CMV infection in symptomatic neonates and infants. Sampling saliva proves to be the best way to diagnose HCMV in terms of convenience and sensitivity to the virus [23]. Using saliva samples for diagnosis has been able to help doctors in developing countries where advanced technologies are not available.

Because there is a strong association between active maternal HCMV and congenital infection, researchers have highlighted the significance of detecting the virus during pregnancy [24]. Like newborn babies who are infected, most pregnant women with primary infection are asymptomatic, making it challenging to diagnose. A CMV loop-mediated isothermal amplification (LAMP) method has been developed to detect CMV in whole blood or amniotic fluid samples from pregnant women [24]. 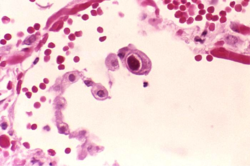 Figure 2. Active Cytomegalovirus Infection in Lung of Patient with AIDS.

Research has shown that Human Cytomegalovirus co-infections increase the risk of Human Immunodeficiency Virus transmissions [26] (Figure 2). The seminal shedding of CMV has been found to be partly responsible for a large number of new HIV infections, even more so than common STIs, such as gonorrhea, syphilis, Chlamydia, or herpes simplex virus type 2 (HSV-2) [26]. Understanding how CMV works with HIV transmission will help develop improved HIV prevention strategies in the future.

Atherosclerosis, a disease in which plaque builds up inside the arteries, is commonly attributed to factors such as high blood pressure and high cholesterol levels in blood. HCMV particles have been found in human atheroslerotic plaques [29]. HCMV-positive lymphocytes have also been found in coronary artery segments from transplantation patients [30]. The genomic DNA of HCMV has been discovered in 59% of arterial walls of patients with ischemic heart disease [31]. While the role of HCMV has not been definitively demonstrated, animal models have been used which suggest that HCMV infection can initiate atherosclerosis. Mice infected with murine cytomegalovirus (MCMV) have an increased percentage of low-density cholesterol, which is a major contributor to atherosclerotic plaques [29]. CMV-infected rats were also observed to develop atherosclerotic lesions [32].

Human cytomegalovirus is also associated with several human cancers. Instead of directly causing cancer formation, more research over the years has shown that infectious particles has attributed to the modulation and modification of tumor growth in humans [33]. Some evidence suggests that HCMV infection protects certain tumor cells from apostatis and modulate angiogenesis (formation of new blood vessels), which can may lead to buildup of tumor cells [34]. HCMV has been found to be associated with colon carcinoma, prostate cancer, adenocarcinoma, cervical carcinoma, neuroblastoma, and glioblastoma [35], however direct causation has not been discovered other than possible HCMV-mediated effects in tumor microenvironment and tumor themselves [33].