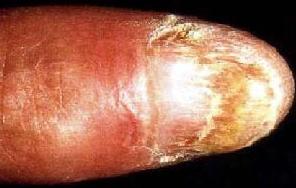 The hands and fingernails are often affected by fungal and yeast infections, such as those caused by species of Trichophyton and Candida. In particular onychomycosis(nail infection) is the most common disease associated with the hands and feet, effectuating at least 50% of all fingernail infections. Onychomycosis is caused by dermatophytes (infectious fungi or yeast) invading the nailbed, which are also causes ringworms and tinea such as athletes foot. Most cases of onychomycosis is characterized by mild inflamations, resuling in the nail bed becoming cornified and losing its normal contour. Another form of onychomycosis results in the destrcution of the nail plate and is often visible by a whitish yellow discoloration. Onychomycosis can also occur on the external nail plate, caused by an invasion of Acremonium and Aspergillus, which infect the superficial layers of the nail resulting in white patches on the nail. Onychomycosis is increasingly viewed as a major medical concern as these infections can lead to secondary infections as well as being transferred to other bodily areas and other people.