A Viral Biorealm page on the genus Human immunodeficiency virus 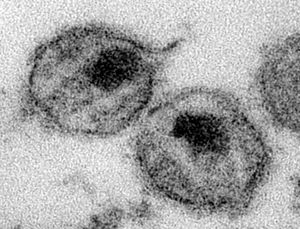 HIV is the causative agent of Acquired Immunodeficiency Syndrome (AIDS). AIDS is a severe, life-threatening disease that represents the late clinical stage of infection with the HIV. 2.5 million people died of AIDS in 2005 alone, and estimates place the number of people living with HIV/AIDS at 38.6 million. HIV/AIDS has claimed more than 25 million lives since 1981.

The genome of HIV-1 is dimeric, unsegmented and contains a single molecule of linear. The genome is -RT and is positive-sense, single-stranded RNA. The complete genome is fully sequenced and of one monomer 9200 nucleotides long. The genome has terminally redundant sequences that have long terminal repeats (LTR) of about 600 nt. The 5'-end of the genome has a methylated nucleotide cap with a sequence of type 1 m7G5ppp6'GmpNp. The 3'-terminus has a poly (A) tract and has a tRNA-like structure and accepts lysin. Two copies of the genome are present in the virion in a dimeric configuration with two copies per particle being held together by hydrogen bonds to form a dimer. (source: ICTV db Descriptions)

The virions of an HIV-1 consist of an envelope, a nucleocapsid, a nucleoid, and a matrix protein. The virus capsid is enveloped. The virions are spherical to pleomorphic and measure 80-100 nm in diameter. The surface projections are small, at 8 nm in length, but densely dispersed and there are inconspicuous spikes that cover the surface evenly. The nucleoid is concentric while the core is rod-shaped or truncated cone-shaped. (source: ICTV db Descriptions)

HIV provirus may lie dormant within a cell for a long time but when the cell becomes activated, it treats HIV genes in much the same way as human genes. First, it converts them into mRNAs using human enzymes. The mRNA is then transported outside the nucleus and is used as a blueprint for producing new HIV proteins and enzymes.

There are complete copies of HIV genetic material among the strands of mRNAs produced by the cell. These gather together with newly made HIV proteins and enzymes to form new viral particles, which are then released from the cell. The enzyme protease plays a vitla role at this stage of HIV's life cycle by cutting down long strands of protein into smaller pieces, which are used to construct mature viral cores.

The earliest unambiguously identified HIV-antibody positive serum stems from Kinhasa, Zaire dating back to 1959. HIV infection spread unrecognized in the 1960s and 1970s before it was finally recognized in 1981. The spread of the virus has been phenomenal thereafter, and close to 40 million people are estimated to be infected with the virus.