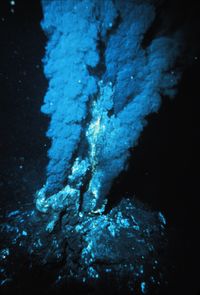 Image captured of a black smoker found at along the Atlantic Mid Ocean Ridge [1].

Nowhere is the resilience of life quite on display like it is near and on the Black Smokers. “Black Smokers” are hydrothermal vents found at sights of tectonic ridges and seafloor spreading, and spew jets of intensely hot chemically-laden fluids [1]. Devoid of light, scarce of oxygen, and crushed under intense pressure from the ocean above, such an environment appears uninhabitable to our standards. Nevertheless, a diverse group of microbes and macrofauna have managed to make black smokers their home, taking advantage of the heat, inorganic compounds, and even the radiation of the superheated rock to sustain themselves[2]. The microbes found at black smokers are known as “extremophiles” for their ability to thrive in places otherwise lethal to other forms of life, thanks in part to physiological processes and enzymes able to function under harsh conditions such as intense heat, known collectively as “extremozymes”[3]. Chemoautotrophic microbes are the primary producers of the environment and are essential to the survival of several of the macro-organisms discovered at the black smokers[2]. In fact, the ability of these microbes to sustain life under such conditions have led many microbiologists to theorize that the ecology of black smokers may reflect some of the earliest stages of life on earth [4]. 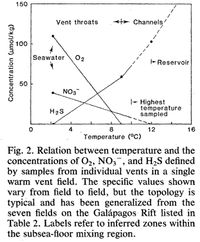 The key to the formation of black smokers is sea-floor spreading. When the tectonic plates of earth’s crusts are shifted, pulled, and moved thanks to the (modeled) convection currents of earth’s asthenosphere, they diverge from each other at certain locations, allowing intensely hot magma to surge upward from below the earth’s surface. This forms a tectonic boundary known as a ridge[6]. At the ocean floor, these ridges are referred to as mid-ocean ridges, and when seawater enters the ridge and mixes with the super-heated magma, it produces a hydrothermal fluid which builds significant pressure until erupting off the ocean floor like an underwater gyre [7]. This hydrothermal fluid can be further cooled by the seawater, resulting in mineral deposition that forms the characteristic chimney-like structures of the black smokers. The vents which create black smokers tend to be hotter, anoxic, acidic and sulfurous[8], producing the characteristic black color and structures that can reach as high as 180 feet. By contrast, the vents which produce the sibling of the black smokers, the white smokers, tend to have cooler plumes rich in barium, calcium, and silicon [6]. In general, the seafloor itself is devoid of sunlight and suffers from immense pressure. At the Juan de Fuca Ridge in the Pacific Ocean, the hydrothermal vents discovered there experience an equivalent pressure of 250 atmospheres, or as one author puts it, the same pressure as one would experience from an elephant standing on their big toe [9]. The “extreme” of the black smokers environment also applies to their temperature gradients; the superheated fluids and rock of the vents surrounded by the stark cold of the deep ocean produces ranges as wide near 0 to 400oC. With conditions like these, scientists assumed that no life could survive here until exploration of ridges in the late 1970s revealed hundreds of previously unknown species [6]. The microbes which make the black smokers their home are well adapted to use the heat, radiation, and anoxic chemical-laden fluids of the smokers to drive their energy production, and subsequently support a “biological oasis”[7]. 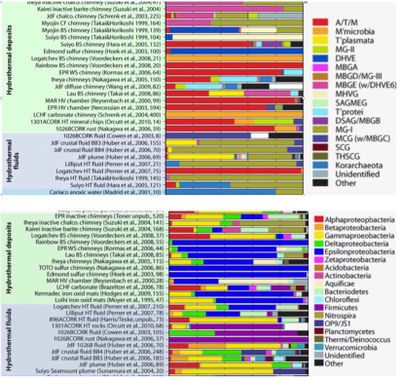 Figures of archaea and bacterial taxonomical diversity found in hydrothermal fluids and deposits, based on proportion of 16S rRNA gene sequenced [[7]].

As described above, the microbial communities of black smokers can reach high levels of species diversity, but are mostly dominated by prokaryotic members. Structurally, prokaryotic communities can be found in more complex mats or in free-living populations[8]. Several phyla of hyperthermophilic archaea can be found on or within the black smokers chimneys, while a mix of thermophilic archaea and bacteria species can be found in the cooler gradients on the seafloor surrounding the chimneys[7]. Their distribution on and around the black smokers seem to have some correlation with the environmental gradients expanding outward from the vent[4]. Studies revealed that amongst the sequenced populations proteobacteria and euryarchaeota were the best represented phylum[7][8]. Amongst these phyllum, the Epsilonproteobacteria and the Archaeoglobus/Thermococcus/Methanococcus archaea were the most heavily represented class[7]. Given their adaptation to extreme environments, most microbial species from black smokers are currently uncultivable; study is primarily done through DNA sequencing analysis of the 16S rRNA gene and organic geochemical techniques such as analyzing samples of lipid biomarkers[8].

The anoxic hydrothermal fluids, lack of solar light, and the inorganic chemical deposits and solutes mean the primary production of microbes are performed by anaerobic chemoautotrophs, generally employing sulfate reducing or methane-based metabolic processes[7]. Within the chimneys themselves, the hyperthermophilic archaea are primarily methanogens, performing autotrophic reduction of carbon dioxide coupled with hydrogen oxidation[7]. Outside the chimneys in the cooler seafloor sediment and surrounding waters, the iron sulfide compounds heavy in concentration in the chimneys’ hydrothermal fluids and deposits support a community of heterotrophic and autotrophic sulfide and metal oxidizers, as well as other methanogens and some organotrophs[7]. However, evidence supports the presence of some unique metabolisms with respect to the environmental conditions of the smokers as well. One study managed to isolate a bacterium phylogenetically related to green sulfur bacteria, which possessed bacteriochlorophyll c and carotenoid chlorobactene that were capable of harnessing the wavelengths of the blackbody radiation[7] emitted by the rock and water superheated by the vents, as described by Plank’s law[10].

image of Kandleri retrieved on wiki from [2]. 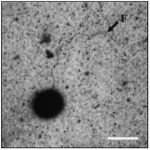 image of Ahangari captured with electron microscopy, retrieved on wiki from [3].

image of boonei captured with electron microscopy, retrieved from [4].

Amongst the microbes who form the basis of the black smoker biological oasis, one of the most notable members is Methanopyrus kandleri, an archaea found in the hydrothermal fluids in and surrounding the black smokers. An autotroph, Kandleri reduces carbon dioxide into methane and requires anoxic conditions to function[7]. Both hyperthermophilic and halophilic, this methanogen is the most temperature resistant of any other known microbial specie, with optimal growth rates above 100oC and observed in temperatures as high as 122oC [7]. Kandleri’s physiology is well suited for the intense pressure and temperature of the black smokers, and may be a textbook example of a specie evolved to take advantage of the countering forces of pressure and temperature on physiological processes[11]. Its genome is so complex and resilient, many have sought to use it in biotech, such as operationalizing its unique DNA topoisomerase V to improve DNA sequencing techniques [12].

Another notable member includes Geoglobus Ahangari who displays a unique combination of metabolisms. Ahangari is known to be able to behave as an autotroph, capable of oxidizing hydrogen in an Fe(III) oxide reduction, or behave as a chemoorganotroph, oxidizing compounds such as pyruvate and acetate while reducing iron in a fermentation reaction[7][13]; in fact, it is first known thermophilic archaeon to completely oxidize organic matter to carbon dioxide in these processes[7]. Ahangari prefers optimal temperatures of about 88oC and requires anoxic conditions, and is isolated from the chimney of the black smoker[7]. Its autotrophic activity helps accumulate significant deposits of magnetite[13].

Finally, one other key player is the Aciduliprofundum boonei. Preferring optimal temperatures of 70oC, boonei was isolated from acidic conditions, growing in pH levels ranging from 3.3 to 5.8 [14]. The isolation of boonei in study suggested in may constitute as much as 15% of the estimated archaea population in hydrothermal vent environments. However, the metabolism of boonei is less understood compared to the other microbes listed here, though they are thought to be heteroorganotrophs, living in association with dense biofilms in areas of high iron oxide and sulfur concentrations that can provide them with the oxidized substrates and complex organic matter needed for their metabolisms[14]. Their role in the metabolic cycling of iron and sulfur in these hydrothermal environments and their high proportion of the hydrothermal archaea population suggests that play a significant role in general sea floor iron and sulfur cycling[7]. 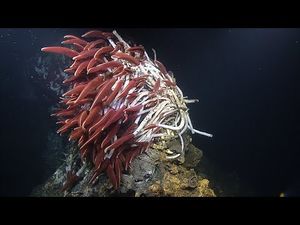 Collective of Riftia Pachyptila on a hydrothermal vent, picture retrieved from [5].

Example of Alvinella pompejana, known as a Pompeii Worm, and its distinctive hairs. Picture retrieved from [6].

The Yeti Crab; they are known to form dense mat-like groups near hydrothermal vents; pictures retrieved from [7], [8].

While important, even essential macro-micro biological relationships can be found in all environments, no where is the necessity of a metabolic symbiosis better represented than in the macro-organisms and their microbe partners that inhabit the black smokers. For example, Riftia Pachyptila is a worm which has evolved to endure remarkable levels of hydrogen sulfide and other extreme conditions found near the black smokers; its survival depends on its symbiosis with sulfide oxidizers. The worms blood stream carries hydrogen sulfide and oxygen, whose otherwise spontaneous reaction is inhibited with HS- binding proteins. The bacteria within then perform its chemoautotrophic function, providing energy for itself and the worm[5] . This symbiosis is so singularly crucial to the worm’s survival that it has sense lost all recognizable ingestive and digestive morphological features, with the “trophosome” tissue which houses its symbionts estimated at approximately sixty percent of its biomass [5].

Another worm, Alvinella Pompejana, boasts the record of one of the most thermally resilient macro life forms on the planet, making its home right on the chimney walls. It achieves its thermal miracle with hair like projections that house epsilonproteobacteria who provide insulating, heat resisting services to the worm.[15] Finally, one other charismatic example of symbiosis comes from the Yeti Crab. Mobile enough to seek out optimal temperature gradients, these crabs also have hairs along their claws, which they wave around the vents and hydrothermal fluids of the black smokers. This motion helps stir up the rich quantities of methane and hydrogen sulfide solutes, that the chemoautotrophic bacteria living on their claws then utilize in anaerobic oxidation.[16]


Black Smokers: A Reflection of the Origin of Life?

Given the resilience of the microbial life found near black smokers, and the relatively early positions of its members on the archaea branch of the phylogenic tree of life [7], some intersection of geologic and biologic study may suggest that the ecology of hydrothermal vents may help unlock the mysteries surrounding the origins of life on earth. The metabolisms of the black smoker microbes, i.e its ability to utilize methane, carbon dioxide, metals, and sulfur all correlate to what study suggests may have been the most readily available reducible compounds, given their origin within the Earth’s mantle as opposed to the atmosphere or even space[4]. Hydrothermal vents are believed to have emerged almost as soon as liquid water first collected on earth, with examples of fossilized black smokers and correlated evidence of fauna and microfossils at sites estimated to be as old as 3.5 billion years [4]. Essentially, the ability of black smoker communities to thrive under conditions that long predated the metabolic pathways we know support terrestrial and surface ecosystems have unlocked a new potential avenue in learning of the complex interplay between Earth’s geological and biological history.

Lacking light and suffering from immense pressure and drastic temperature gradients, Black Smoker hydrothermal vents have still cultivated a diverse and stunning ecosystem thanks to a foundation of extremophiles who can employ specialized proteins and enzymes to metabolize the anoxic inorganic compounds which surge through into the ocean from deep beneath the Earth's surface. Their relative mystery and resilience has brought them enormous attention and study since their discovery in the late 1970s, and further improvement of technique and research may one day reveal that it may be just as important to refer to black smokers as one of the original environments, not just one of the more extreme.