Hyphomonas adhaerens is a marine, budding/prosthecate bacteria. It is a primary colonizer on submerged surfaces in the marine environment. They are found in ocean niches, mud sloughs and hydrothermal vent sites. The main body of the mother cell is a prolate spheroid, 1-2 μm in diameter with one prosthecum 0-2 μm wide by 1-5 μm long. The main body of the reproductive cell is surrounded by a capsular polysaccharide. It is gram-negative, not acid-fast, has no endospores, and is aerobic. It is also motile by a single flagellum. In experiments, it forms in colonies that are round and undulate and are 1-5 mm in diameter after three days at 30°C. It forms a thick biofilm in liquid media and grows optimally at 27-37°C. Optimum growth in ocean salt is 1.5-12% and pH at 5.7-8.7. It also reduces nitrate. [1]

H. adhaerens is known to be susceptible to novobiocin, streptomycin, tellurite, crystal violet, brilliant green and methylene blue. However, it is resistant to 1•0% Tween80, penicillin and ampicillin. [1]

The partial 16S ribosomal sequence of Hyphomonas adhaerens strain MHS-3 revealed a linear genome 1334 base pairs [6]. The G+C content of H. adhaerens is 60% [1]. The complete genome sequence for this organism has yet to be completed [5]. 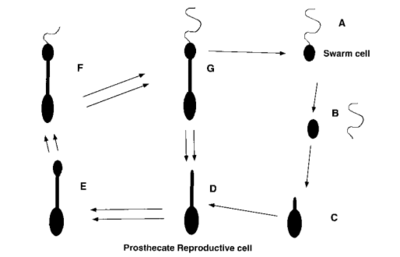 Biphasic life cycle of Hyphomonas. Spherical swarm-cell (A) loses its flagellum (B), metamorphosis into a specialist (C), forms a prosthecum (D), it elongates (E), matures apart from the reproductive cell (F and G).

The cell structure of Hyphomonas adhaerens consists of a mother cell and one polar prosthecum. The mother cell is prolate spheroid which is approximately 1-2μm in diameter, while the prosthecum is 0.2μm wide and 1-5μm long. The mother cell is surrounded by a capsular polysaccharide. The major fatty acid found in the cell is octadenoic acid (18:1) which comprises 80% of the total fatty acids. There are at least four outer membrane proteins with >100kDA that can be synthesized by Hyphomonas. [1]

Most of the members of the genus Hyphomonas are heterotrophic - they use organic compounds like carbon and nitrogen. H. adhaerens catabolize proteins and amino acids for energy and growth. [1]

Genus Hyphomonas, including H. adhaerens, are known to have a biphasic life cycle. They live the first stage of their life cycle as a swarm-cell that will gradually develop into a benthic, reproductive cell [1]. The swarm-cell is planktonic and used for survival in the pelagic zone while the prosthecate cell, functions for adherence to surfaces and biofilm formation, is used for survival in nutrient-rich biofilms. [3]

Ecology, Pathogenesis, and Significance to Gold 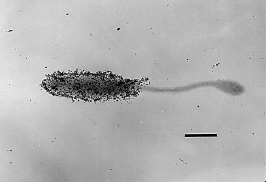 Binding of colloidal gold to the MHS-3 polar polysaccharide capsule.

Hyphomonas adhaerens has no known pathogenicity as well as no known symbiotic relationships.

As mentioned above, Hyphomonas adhaerens (MHS-3) adheres to submerged surfaces in the marine environment, however, it is oftentimes found living adjacent to hydrothermal vents where gold is found in abundance. [2]

The solubility of gold decreases as seawater cools and results in the deposition of gold sulfides. Gold is subsequently carried into the water column in a hydrothermal plume then becomes deposited on the seafloor. [2]

MHS-3 interestingly has the ability to bind gold. On average, it comprised an average of 58.2+/-2.27% wt/wt gold when incubated in a 2.5-mM solution of chloroauric acid. MHS-3's extracellular polymeric substances (polar holdfast and capsular polysaccharide) has the ability to sequester cationic gold because the EPS is negatively charged while the metal ions are positively charged. Colloidal gold adheres to the polar polysaccharide capsule of MHS-3 and not to the capsuleless MHS-3 rad cells. [2]