H. dujardini is a freshwater species of Tardigrade (also known as water bears) found in the algae and sediments of rivers, streams, and lakes [2], and is cosmopolitan in nature, being found in many different environments around the world. They have been found to survive in a multitude of environments and are one of the most resilient animals on Earth, placing them in the category of extremophiles. They have the ability to survive in extreme high and low temperatures, extreme high and low pressures, deprivation of air, starvation, dehydration, radiation, and have even been found to survive in outer space [7]. Geographically, they have been found in the Palearctic, Neotropical, Nearctic, Afrotropical, Antarctic, and Indomalaya regions, and are the most commonly found tardigrade in the Nearctic region [2].

H. dujardini are approximately 0.50mm in length and have long, plump bodies with 8 legs, with claws on the end of each, lined symmetrically down the length of their bodies [2]. To distinguish H. dujardini from other species of tardigrade there are three main features to observe:

Additionally, females often appear to be larger than the males [2].

H. dujardini is one of the best studied species of tardigrade and has been important to use as a model for studying the evolution of development [4]. Additionally, they have been used in a study that observes the effect of taking away a geomagnetic field on the mortality rate of H. dujardini [3]. This study addresses the question of terrestrial organisms having the ability to travel through space and colonise on new planets, including organisms from Earth.

There is no known information on the mating habits of H. dujardini, but sexual reproduction is often undergone as there are usually both male and females in a population [2]. However, when sexual reproduction is not a viable way to produce offspring, meiotic parthenogenesis can occur. This is when a haploid egg returns to diploid through the duplication of chromosomes [2]. Molting (shedding of claws, waxy cuticle, and hindgut) occurs throughout the lifetime of H. dujardini, approximately 4-12 times and can take between 5-10 days to complete each time, and is an important part of reproduction [2]. Females can lay between 3-4 eggs on average each reproductive cycle and will lay these eggs in the shed from their molt to undergo development for 4-4.5 days before hatching [2]. It has been found though that eggs developed in a laboratory take 13-14 days to hatch [2]. 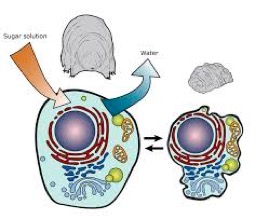 There have been no experiments on H. dujardini involving testing where they receive their nutrients from, but it can be assumed that since other moss-dwelling tardigrade have been found to feed on algae, H. dujardini would be the same [2].

The survival ability of H. dujardini is due to their incredibly effective environment stress response of undergoing cryptobiosis (more specifically known as, and driven by, anhydrobiosis) and induced by desiccation when conditions become unfavourable [2]. Anhydrobiosis is when they become ametabolic and dehydrated to survive extreme environmental stressors until the conditions become favourable again and they come into contact with water which the stimulates desiccation emergence [2]. They can survive in this state for varying lengths of time, with a 120 year old, unidentified species of tardigrade was observed going through desiccation emergence when some moss was rehydrated [2]. Typically though, when not under a desiccated state, H. dujardini have been predicted to live anywhere from 4-12 years in the wild [2].