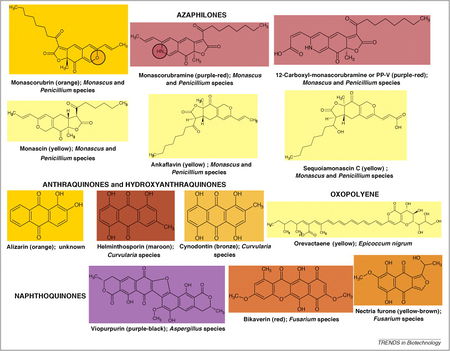 Pigmentation is a characteristic that is common to many species of Bacteria. Pigments are light-absorbing compounds that are responsible for the colors that organisms display. Diverse groups of pigments are produced by organisms of the Bacteria domain, and they play important roles in the survival of the organisms which produce them. For example, the pigment xanthomonadin protects the Bacteria Xanthomonas oryzae from damage due to light (photodamage) [8]. Lastly, bacterial pigments can be chemically treated and used in a variety of industrial processes.

Applications of Pigments in Different Fields

Colorants are used in a vast majority of products that humans use, ranging from food to clothing and textiles. However, a problem with many of these colorants is that they are synthetic, making them harmful to the environment because they are difficult to biodegrade. Furthermore, many synthetic dyes contain toxins that are harmful to humans. Several textile dyes have been determined to contain dioxins, such as polychlorinated dibenzo-p-dioxins (PCCDs) and polychlorinated dibenzofurans (PCDFs) [5]. Dioxins are extremely toxic because they are carcinogenic, and can cause disorders in the immune, nervous, and digestive systems [7]. Also, disposed dioxin-containing textiles can contaminate the environment and accumulate in living organisms, thus damaging the global ecosystem [4]. There has been a growing demand for natural dyes, which are biodegradable and have a less harmful impact on the environment [1]. The task of discovering pigments suitable for being used as food colorants is a difficult one, as pigments must not only produce a desired color, but also be safe for human consumption. In an experiment conducted by Zhang et al., a blue pigment produced by the Bacteria Streptomyces coelicolor was isolated and named as λ-actinorhodin, related to the bacteria-produced antibiotic actinorhodin [12]. In a toxicity trial, this pigment was shown to have an LD50 (median lethal dosage) greater than 15000 mg/kg, thus making it non-toxic [12].

Textile and Other Colorants

As textile colorants are not as restricted by as many safety requirements as food colorants, there are many more bacterial pigments used in textiles and other non-edible products than in food. Ahmad et al. describes the extraction of yellow-orange, red, and purple pigments from Chryseobacterium sp., Serratia marceseus, and Chromobacterium violaceum respectively [1]. The red and purple pigments, known as prodigiosin and violacein respectively, were then used as colorants on different fabrics (acrylic fiber, silk, cotton, polyester, and polyester microfiber), and their colorfastness (tendency to cling onto fabric when washed, exposed to light or perspiration) on the fabrics was recorded [1]. Both pigments showed high colorfastness when stained on to acrylic fiber, silk, and polyester microfiber, while displaying average colorfastness to cotton and polyester [1]. Furthermore, both pigments displayed a high staining capability on all the fabrics, implying that a minimum amount of pigment was required to stain the fabrics [1]. These tests show the ability of specific pigments to be used successfully as colorants for textiles. As new safe and effective natural colorants are discovered, they can replace the potentially harmful synthetic dyes that are currently used on products such as denim and yarn. 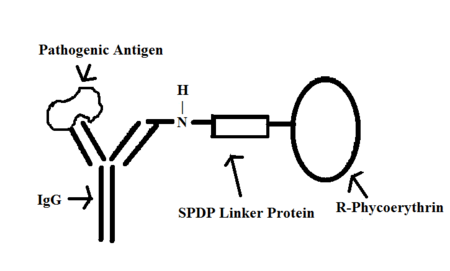 Bacterial pigments with fluorescence are used in laboratories to label antibodies and also indicate the progress of specific reactions. A key example of this is phycoerythrin, an accessory pigment to chlorophyll in photosynthetic bacteria. It is essential because it captures light energy and then transfers it to the chlorophyll reaction centre [6]. One application of phycoerythrin as a fluorescence-based indicator is to detect the rate of damage caused by free peroxy radicals. Since the radicals react strongly with Phyoerthyrin, scientists can make an assay that shows the change in the concentration of pigment over time [2]. Initially, the pigment will appear on the assay as an area of fluorescent glow. As peroxy radicals are added to the pigment, dark spots appear where radicals have reacted with the pigment, causing the overall fluorescence emission to decrease over time [2]. This assay can then be used to predict the rate of peroxy radical scavenging in human plasma [2].
A specific type of Phycoerthyrin, known as R-Phycoerthyrin, can be used to fluorescently label antibodies. In an experiment conducted by Mahmoudian et al., R-Phycoerthyrin was bound to IgG antibodies by a linker protein known as SPDP [6]. Fluorescently-labeled antibodies can be exposed to a pathogen such as E. histolytica, and consequently stain the pathogen as the labeled antibodies bind to it [10]. 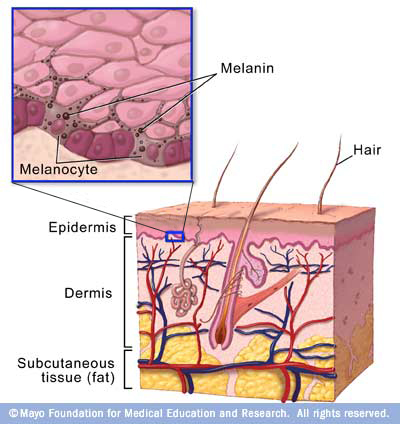 Location of melanin on the human skin layers

Interestingly, one major industrial application of bacterial pigments has nothing to do with the pigments’ visual properties. Some bacterial pigments are used to promote human health, providing key nutrients and compounds that are needed by the body. Carotenes, including the well-known compound β-carotene, are a group of pigments responsible for many beneficial effects towards human health [9]. β-carotene and astaxanthin (a xanthophyll) are produced by many kinds of bacteria, and are essential in maintaining the yellow color of the retinal macula, giving it the ability to act as sunblock on certain parts of the retina. [11] Therefore, the pigments play an important role in maintaining the health of the human eyes. Furthermore, common bacteria pigments such as prodigiosin (red color), carotene, and xanthophylls have carcinogenesis-prevention roles, as these pigments have anti-oxidative, anti-free radical, and apoptosis-inducing activity. [9] Melanin, a common pigment that creates the black, brown, and grey colors in many bacteria, has also shown significant antioxidant activity. [3] Furthermore, melanin is used in sunblock to protect the skin from UV radiation. [9]

4 Halsall, C. J. “Investigating the occurrence of persistent organic pollutants in the Arctic: their atmospheric behaviour and interaction with the seasonal snow pack.” Environmental Pollution, 2004, Vol. 128(1-2): 163-175.