Infanticide (in animals) generally refers to the killing of an infant or a young offspring by an adult or mature individual of the same species and is observed in a variety of species ranging from humans to microscopic rotifers and especially in primates. Both males and females can be the perpetrators of infanticide in animals and both parents (filial infanticide) and non-parent individuals have been observed to display the behavior. Filial infanticide, which can be accompanied by cannibalism (filial cannibalism), is widespread in fishes and is also seen in terrestrial animals. It has been estimated that infanticide occurs in 25% of all mammals and, in some of these populations, infanticide is a major contributor to infant mortality.[1]


Many primates such as the gorilla, chimpanzee, baboon, and langur have been known to practice infanticide while others, such as the orangutan, bonobo and mouse lemur have not been observed to do so[1]. Although previously considered pathological and maladaptive and attributed to environmental conditions such as overcrowding and captivity [2], there are currently several explanations for why infanticide has evolved in non-human primate communities. Interestingly, the frequency and distribution of infanticide seems to suggest that there is a correlation between infanticide risk and social organization in mammals and primates. Male infanticide occurs most frequently in social species, less frequently in solitary species and least frequently in monogamous species.[3] The fitness advantage the behavior has, the associated costs and the different ways it is thought to have affected the structure of primate populations have made the evolution and genetics of the behavior very interesting to study.

Section 1 Evolution and Genetics of Behavior

Several explanations have been proposed for the existence and evolution of infanticide in non- human primates. The benefits of infanticide for male non-human primates, and its costs to females, probably vary across mammalian social and mating systems [3] and between different primate species as well. Infanticidal behavior can be adaptive because of nutritive benefits individuals gain from cannibalism, conservation of resources by eliminating competitors and paternal manipulation in which parents terminate investment in particular offspring by killing (and often consuming) them [4]. The prevailing adaptive explanation for the behavior, however, has been the sexual-selection hypothesis according to which males increase reproductive opportunity by killing unrelated, unweaned offspring, thus hastening the mother's next ovulation, at which time the infanticidal male can mate with her [5]. Alternate nonadaptive explanations such as social-pathology and side effect hypotheses have also been proposed.[5]


Males in primate groups often exploit infants to which they are not related in ways that lead to the death of the infant.[4] Several primate species have been observed to engage in the killing and subsequent cannibalism of infants.[4] This type of behavior has also been seen in the great apes such as bonobos and chimpanzees.[6][7] In chimpanzees, cannibalism has been suggested to be the primary function of infanticide.[7] Infants may also be used as protective buffers in primate groups during agnostic encounters (conflicts) between males which can result in the death of the infant.[8] Females in primate groups also kill or cannibalize infants although usually for motivations different from nutrition.[9] 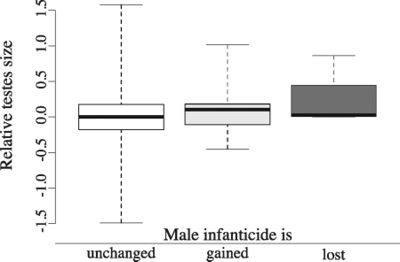 Baby gelada baboons play in the Simien Mountains of Ethiopia in this Nov. 30, 2012, picture.(AP Photo)
https://www.newser.com/story/198646/why-25-of-mammals-commit-infanticide.html

Maternal infanticide, although very rarely observed in non-human primates, has been considered as a way of paternal manipulation to end investment in certain offspring. [9] A study investigating maternal infanticide in tamarins has concluded that maternal infanticide can occur in a group with a poor capacity to raise offspring, multiple breeding females and estimated low survival probability for the infants that are killed because of injuries or apparent weakness.[9] The same study also found that the infants that were killed were cannibalized by their mothers. However, the study indicates that the mothers likely did not kill their offspring to exploit the meat.[9] The victim of infanticide for parental manipulation does not necessarily have to be defective but can simply be born at a bad time, consequently being a supplementary cost to the parents. [5]


On the other hand, the evolution of (nonparental) male infanticide has often been explained by the sexual selection hypothesis, which posits that infanticide improves male reproductive success by shortening the interbirth intervals of the mothers of the killed offspring.[5][10] Notably in primates, male infanticide can increase the reproductive success of male individuals by accelerating the return of females to fertilizable condition and ensuring that a greater percentages of the individuals’ offspring become the next generation when the male kills the offspring of other rival males [4]. The sexual selection hypothesis is supported by findings that indicate that infanticide mostly occurs in social species, less in solitary species, and least in monogamous species since according to the sexual selection hypothesis, infanticide would be most adaptive in stable bisexual groups where a few males monopolize reproduction over short periods of time [3].In social species where a few males monopolize reproduction over short periods, killing the offspring of males who had previously been monopolizing reproduction would be adaptive for the individuals committing infanticide. In monogamous species, since pairs of reproducing adults live together with their offspring their whole lives, male infanticide of unrelated infants would not be as adaptive for individuals. A study into infanticide in langur monkeys has also shown that male attackers were not related to their infant victim and were likely the fathers of subsequent infants based on DNA analyses, further supporting the hypothesis.[11]

Male infanticide has been reported for about half of all species in our sample (open circles) and seems to have evolved independently multiple times. It mostly occurs in social species (dark gray branches), less in solitary species (light gray branches), and least in monogamous species (black branches). Animal drawings are from phylopic.org.