Infanticide (in animals) generally refers to the killing of an infant or a young offspring by an adult or mature individual of the same species and is observed in a variety of species ranging from humans to microscopic rotifers and especially in primates. Both males and females can be the perpetrators of infanticide in animals and both parents (filial infanticide) and non-parent individuals have been observed to display the behavior. Filial infanticide, which can be accompanied by cannibalism (filial cannibalism), is widespread in fishes and is also seen in terrestrial animals. It has been estimated that infanticide occurs in 25% of all mammals and, in some of these populations, infanticide is a major contributor to infant mortality.[1]

Many primates such as the gorilla, chimpanzee, baboon, and langur have been known to practice infanticide while others, such as the orangutan, bonobo and mouse lemur have not been observed to do so[1]. Although previously considered pathological and maladaptive and attributed to environmental conditions such as overcrowding and captivity [2], there are currently several explanations for why infanticide has evolved in non-human primate communities. Interestingly, the frequency and distribution of infanticide seems to suggest that there is a correlation between infanticide risk and social organization in mammals and primates. Male infanticide occurs most frequently in social species, less frequently in solitary species and least frequently in monogamous species.[3] The fitness advantage the behavior has, the associated costs and the different ways it is thought to have affected the structure of primate populations have made the evolution and genetics of the behavior very interesting to study.

Section 1 Evolution and Genetics of Behavior

Several explanations have been proposed for the existence and evolution of infanticide in non- human primates. The benefits of infanticide for male non-human primates, and its costs to females, probably vary across mammalian social and mating systems [3] and between different primate species as well. Infanticidal behavior can be adaptive because of nutritive benefits individuals gain from cannibalism, conservation of resources by eliminating competitors and paternal manipulation in which parents terminate investment in particular offspring by killing (and often consuming) them [4]. The prevailing adaptive explanation for the behavior, however, has been the sexual-selection hypothesis according to which males increase reproductive opportunity by killing unrelated, unweaned offspring, thus hastening the mother's next ovulation, at which time the infanticidal male can mate with her [5]. Alternate nonadaptive explanations such as social-pathology and side effect hypotheses have also been proposed.[5]


Males in primate groups often exploit infants to which they are not related in ways that lead to the death of the infant.[4] Several primate species have been observed to engage in the killing and subsequent cannibalism of infants.[4] This type of behavior has also been seen in the great apes such as bonobos and chimpanzees.[6][7] In chimpanzees, cannibalism has been suggested to be the primary function of infanticide.[7] Infants may also be used as protective buffers in primate groups during agnostic encounters (conflicts) between males which can result in the death of the infant.[8] Females in primate groups also kill or cannibalize infants although usually for motivations different from nutrition.[9]


Maternal infanticide, although very rarely observed in non-human primates, has been considered as a way of paternal manipulation to end investment in certain offspring. [9] A study investigating maternal infanticide in tamarins has concluded that maternal infanticide can occur in a group with a poor capacity to raise offspring, multiple breeding females and estimated low survival probability for the infants that are killed because of injuries or apparent weakness.[9] The same study also found that the infants that were killed were cannibalized by their mothers. However, the study indicates that the mothers likely did not kill their offspring to exploit the meat.[9] The victim of infanticide for parental manipulation does not necessarily have to be defective but can simply be born at a bad time, consequently being a supplementary cost to the parents. [5]

Baby gelada baboons play in the Simien Mountains of Ethiopia in this Nov. 30, 2012, picture.(AP Photo)
https://www.newser.com/story/198646/why-25-of-mammals-commit-infanticide.html

On the other hand, the evolution of (nonparental) male infanticide has often been explained by the sexual selection hypothesis, which posits that infanticide improves male reproductive success by shortening the interbirth intervals of the mothers of the killed offspring.[5][10] Notably in primates, male infanticide can increase the reproductive success of male individuals by accelerating the return of females to fertilizable condition and ensuring that a greater percentages of the individuals’ offspring become the next generation when the male kills the offspring of other rival males [4]. The sexual selection hypothesis is supported by findings that indicate that infanticide mostly occurs in social species, less in solitary species, and least in monogamous species since according to the sexual selection hypothesis, infanticide would be most adaptive in stable bisexual groups where a few males monopolize reproduction over short periods of time [3].In social species where a few males monopolize reproduction over short periods, killing the offspring of males who had previously been monopolizing reproduction would be adaptive for the individuals committing infanticide. In monogamous species, since pairs of reproducing adults live together with their offspring their whole lives, male infanticide of unrelated infants would not be as adaptive for individuals. A study into infanticide in langur monkeys has also shown that male attackers were not related to their infant victim and were likely the fathers of subsequent infants based on DNA analyses, further supporting the hypothesis.[11]

Male infanticide has been reported for about half of all species this sample (open circles) and seems to have evolved independently multiple times. It most frequently occurs in social species (dark gray branches), less frequently in solitary species (light gray branches), and least frequently in monogamous species (black branches). Animal drawings are from phylopic.org.
https://science.sciencemag.org/content/346/6211/841

One such evidence supporting the sexual selection hypothesis comes from a study conducted on house mice showing that infanticide is a highly liable and heritable behavior.[15] The study also concludes that there is a sex difference in the genetic substrate that regulates the inheritance of infanticidal behavior [15]. Recent advances in technology have shown that genetics heavily influences behavior or behavioral phenotype in primates and have led to the beginning of the identification of genes mediating different behaviors [16]. Though it is not clear which genes are involved in primate infanticide, there is likely a genetic basis for the behavior that is yet to be discovered.


Variation in social organization and mating systems may have favored or prevented the evolution of infanticide by males in mammalian species. The distribution of male infanticide is closely associated with the absence of seasonal or annual breeding. Seasonal breeders cannot resume (reproductive) cycling before the next breeding season. [3] As a result, infanticide in seasonal breeders doesn't accelerate the mother's return to sexual activity, relatively decreasing its adaptive advantage.[3] Furthermore, infanticide is more likely to occur in mammalian species where there are more males per females in social groups and dominant males obtain a higher share of reproduction in a given season but maintain their dominant position for short periods of time.[3] In these species, new dominant males could kill the infants of the previous dominant male so that more of the new dominant male’s genes are transferred to the next generation.[3]

Section 2 Costs of Infanticide and Counter-startegies

Whatever the benefit of male infanticide to the perpetrators, there is little doubt that it usually imposes a substantive cost on females’ fitness and reproductive success (as well as infants), particularly in the slowly reproducing species in which infanticide due to sexual selection is expected to operate.[4] This is thought to have led to the evolution of several female counter-strategies against infanticide ranging from physical defense of infants from infanticidal individuals to promiscuous mating to confuse paternity.[4] In addition to these counter-strategies, males are also thought to display behavior that prevents infanticide when their own offspring is involved.[17]


In many primate species, mothers have been documented to increase visual monitoring of potentially infanticidal male and/or offspring, and restrain and/or maintain proximity to infants more under conditions of heightened infanticide risk.[4] Males may also physically defend their own offspring.[17] In social primates such as baboons and macaques, the main role of male-male aggression may be to provide exclusive reproductive access to females and defend them and their young from stranger males.[17] Both of these counter-strategies result in costs such as expenditure of extra energy and increased risk of injuries. [17]


Another female counter-strategy against male infanticide (carried out due to reasons outlined by the sexual selection hypothesis) that has thought to have evolved in primates is promiscuity or multi-male mating.[4] Promiscuous mating as a result of some reproductive adaptations/changes creates paternity confusion among the primate group thereby decreasing the likelihood of infanticide since perpetrators would not be sure if they were killing their children.[17] Among primates, 62% of species with female susceptibility to infanticide show promiscuity, compared to the 11% of non-vulnerable species showing promiscuity. [18] This suggests that there is some correlation between infanticide and promiscuity in primates. Females in some primate species such as langur and gelada have also been known to terminate pregnancies to end investment in that offspring early after exposure to new replacement males through a process known as the Bruce effect.[4] Other female reproductive counter-strategies include but are not limited to concealed ovulation (paternity is obscured by the absence of reliable signals of ovulation and/or by variability in the timing of ovulation) and copulation with specific males (like those most likely to commit infanticide or more likely to protect the offspring). [4] A large set of potential female counterstrategies involves deterrence through cooperation with conspecifics (individuals of the same species). [4] Females in some primate species may form associations or coalitions with other females and with males to defend their offspring and reduce the risk of infanticide. [4]


Both infanticide and the counter-strategies against can have their own costs. Increased risk of injuries for both the perpetrator and the defender is one cost. [17] Some of the counter strategies listed above such as multi-male mating or physical defense are generally associated with the increased expenditure of energy, increased exposure to predation and, obviously, increased risk of injury for both the perpetrator and defender.[17] Counter strategies like multi-male mating and female mate choice could limit choice for good genes since the females would be forced to mate with specific males, [17] affecting populations as a whole. 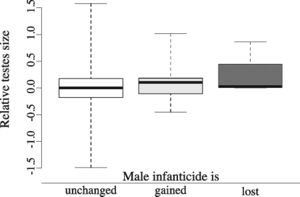 In some lineages in which males commit infanticide, testes appear to increase in size (relative to body mass) and after some time, male infanticide is lost when testes have become relatively large.
https://science.sciencemag.org/content/346/6211/841

Male infanticide has been proposed to alter social evolution in mammals (and primates) by favoring female gregariousness or permanent male-female associations or by promoting a higher number of resident males that may help mothers to protect their infants from male intruders.[3] It has also been proposed that male infanticide likely led to social monogamy in primates and, potentially, humans.[19] However, these theories have been criticized[3][20] and some have pointed out that these theories are not based on enough data, but make assumptions that are likely incorrect.[20] It is also important to consider that infanticide risk is low in solitary species, the ancestral mammalian social organization, and is unlikely to motivate evolutionary transitions from a solitary lifestyle to other social organizations.[3] Phylogenetic reconstructions have also shown that male infanticide is significantly more likely to evolve after transitions toward group living than in their solitary ancestors. [3] As mentioned above, male infanticide could have led to the evolution of multi-male mating or promiscuity of females in some primates species. [3][4] In support of this hypothesis, phylogenetic reconstructions indicate that relative testis size (which is an indicator of sperm competition) is larger in lineages in which more time has elapsed since the evolution of infanticide. [3] In addition, infanticide is lost in lineages with large testes, indicating that infanticide may disappear where female attempts to prevent male sexual monopolization are successful. [3]