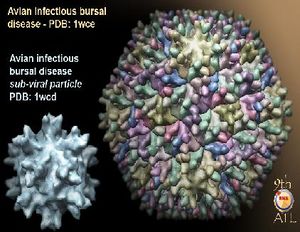 The infectious bursal disease virus is a small, non-enveloped virus, that is a part of the family Birnaviridae (2). The virus has a single capsid shell made up of 32 capsomers. It has a diameter of 60 to 70 nanometers. The sequenced genome of the virus consists of two RNA segments. The first, larger segment is about 3,400 base pairs and the second, smaller segment is about 2,800 base pairs long (2). The virus is stable enough to live outside the host for seven weeks, in the straw and sawdust mixture found in chicken coops, to four months, in the chicken feed (8). The virus can not be degraded by acidic pH or lipid solvents, which could be some factors that increase the virus' chances living outside the host. The target of the virus is the B-lymphocytes in the lymphoid follicles of bursa (8).

The virus causing infectious bursal disease is known only to give chickens the clinical disease and other avian animals are only susceptible to infection (4). Young chicks tend to show signs of the clinical disease within weeks 3 and 6 of life (3). The viral disease causes necrosis of lymphocytes and specifically affects the bursa of Fabricius, a lymphoid organ (3). A study of infectious bursal disease in Ranchi, India showed that the disease occurred more often in chickens in the 4-7 weeks age group in male chickens (8). The disease is very contagious causing 100 percent morbidity and the virus is deadly killing up to 90 percent of infected chicken populations (8). 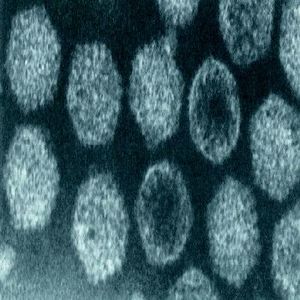 Chicken acquire the pathogenic IBD virus via oral route, where it is then transported to other organs and tissue by phagocytic cells (4). Common symptoms of chickens infected with the virus include whitish or watery diarrhea, anorexia, depression, ruffled feathers, trembling, and severe prostration (3). The host and symbiont have a parasitic relationship where the virus attacks lymphoid cells and causes apoptosis of the host's surrounding cells (4). The host is also affected in that the virus impairs the chickens antibody-synthesizing ability to fight certain antigens (5). The interaction is facultative because the host is healthy without the virus and the virus can still survive without the host (6). 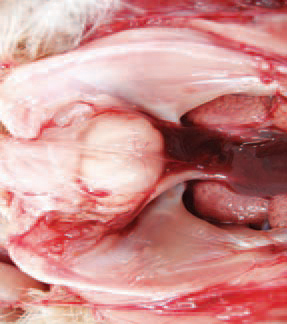 IBDV is a very stable virus in that it persists in poultry, even after thorough cleaning and disinfecting. IBDV is different than other reoviruses in that it is more resistant to heat and ultraviolet radiation (6). There are two know serotypes of the virus. the first are more pathogenic to chicken whereas the serotype II viruses infect chicken and turkey with unknown clinical significance (3,6). IBDV RNA is consistent with a double-stranded structure and has a buoyant density of 1.62 g/ml in caesium sulphate gradients, a melting point of 95-5 °C in the presence of RNase, and a base composition reflecting the pairing of adenine and uracil as well as guanine and cytosine (6).

In 2009, Rauf, et al. inoculated chicken with two strains of IBDV. The first was a classical strains (cIBDV) of the serotype 1 viruses which was considered to be a single antigenic type. The second strain was an antigenic variant (vIBDV) of the virus, but does not cause clinical signs of the disease (7). He found that chickens inoculated with the cIBDV strain had a 8% mortality while the variant strain, vIBDV, had healthy looking chicken. Both strains produced infiltration of the the T cells and macrophages in infected bursa, except that cIBDV caused more bursal damage than the vIBDV strain. The cIBDV strain replicated extensively in the bursa and infiltrated more inflammatory cells, along with a greater accumulation of T-cell than the vIBDV strain (7). Overall, their findings show how the classical strain of IBDV has more negative effects than the tested variant strain.

In 2012, the first lab cell culture of very virulent Infectious Bursal Disease Virus (vvIBDV) was grown in chicken mesenchymal stem cells (9). This method of studying is being used as an alternative to chicken embryo fibroblast studies that were previously done. The purpose of this study was to produce a new method of detection of IBDV in chickens and it was successful (9).