A Viral Biorealm page on the family Inoviridae 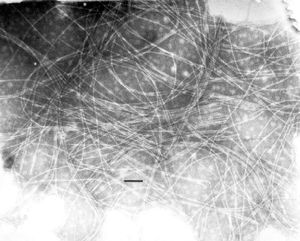 The virions of inoviridae consist of a capsid that is not enveloped. The capsid is elongated and exhibits icosahedral symmetry. The capsid is rod-shaped, straight to flexuous with a length of 85-280 nm or 760-1950 nm, and a width of 10-16 nm or 6-8 nm. Frequently morphologically aberrant forms have also been observed and they are of abnormal length. (source: ICTV dB Descriptions)