Difference between revisions of "Isospora belli"

A Microbial Biorealm page on the genus Isospora belli 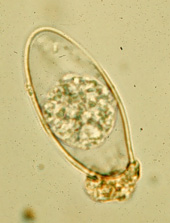 Isospora belli is a coccidian protozoan that infects humans and some primates. This species was first recorded in 1915 by Dr. H.M. Woodcock when he observed coccidian oocysts in the feces of World War I soldiers overseas. (1) Since then I. belli has been studied as the causal agent in the intestinal disease Isosporiasis. This protozoan is frequently responsible for the phenomenon known as “traveler’s diarrhea.” I. belli is found throughout the world but is more common in tropical and subtropical locations. It is the least common of the three coccidian parasites that infect human intestines. (2)

This disease is typically mild in healthy individuals but can be life threatening in people who are young or immunodepressed. Isosporiasis was largely ignored until its recent emergence as one of the opportunistic infections affecting AIDS patients. In the United States the prevalence of I. belli is low even among those with AIDS. The US rate of infection for AIDS patients with Isosporiasis is 0.2% but in underdeveloped countries like Haiti, the rate is around 15%. (3)

Isospora belli has linear DNA consisting of 3049 base pairs. (4) The number of chromosomes in I. belli has not yet been determined as the chromosomes do not condense during mitosis. Many organisms in the phylum Apicomplexa, including the very closely related Toxoplasma gondii, have a 35 kb circular piece of DNA in addition to linear chromosomes. This circular DNA is called an apicoplast and is believed to have originated from a plastid. (5) Another related organism, Cryptosporidium parvum, does not have an apicoplast. A recent study that determined C. parvum most likely has eight chromosomes also found a small molecular density molecule that could be related to the apicoplast. (6) It is not known whether I. belli has an apicoplast in addition to its linear DNA.

I. belli oocysts are immature and usually contain one sporoblast when they are excreted in feces. This sporoblast will divide once and form a cell wall to become a sporocyst. The two sporocysts will further divide until each has produced four sporozoites. When the oocyst is ingested, these sporozoites are released into the small intestine where they invade the epithelial cells. The sporozoites initiate asexual reproduction within the cell resulting in merozoites which are released to invade other intestinal epithelial cells. After several cycles of asexual reproduction, the merozoites eventually produce male microgametes and female macrogametes. Fertilization of the macrogamete produces the immature oocyst to be excreted in feces. (2)

The oocyts are ovoid and range in size from 23–36 µm by 12–17 µm. I. belli sporocysts are contained within the oocysts and appear circular. The general size of sporocysts is 12–14 µm by 7–9 µm. Sporozoites and merozoites are small rice shaped granules. (7) Isospora metabolism is anaerobic and microaerotolerant. (8) Organisms in the class Apicomplexa absorb nutrients from the host cells and use simple diffusion for respiration and excretion. (9)

I. belli requires variation in its environment for a continuous lifecycle. The organism undergoes both the asexual and sexual reproduction cycles inside its host, usually in the intestine. When the oocysts are excreted in fecal matter they typically are not ready to reproduce and must remain outside a host for 1-2 days before ingestion. (10) Because I. belli thrives under immunodepressed conditions, it is often seen in conjunction with HIV infection. Once HIV has caused the CD4 count to drop below 300 cells/mm3, I. belli can infect a person without effective interference from the host immune system. (11)

In healthy individuals I. belli is usually asymptomatic or produces self limiting diarrhea. If the host is young or immunodepressed the symptoms can include:

I. belli is transmitted by fecal-oral contamination. This occurs more frequently under poor sanitation conditions. There is a 3-14 day incubation period between the ingestion of an infectious oocyst and onset of symptoms. After ingestion, the sporozoites invade epithelial cells in the small intestine which eventually destroys these cells. It has been suggested that the cause of Isosporiasis symptoms is toxin related but no toxin has been identified. (12)

I. belli infection can be diagnosed by stool specimen. The I. belli oocysts are easily dyed with modified acid-fast stains. Most treatment for Isosporiasis is simply to relieve symptoms as they appear. It may be necessary to treat patients for malabsorption if severe diarrhea persists. The antibiotic trimethoprim-sulfamethoxazole (TMP-SMZ) is used prophylactically in AIDS patients to prevent Pneumocystis carinii infections. I. belli infections can also be avoided with TMP-SMZ and even patients who are already infected usually respond well to this treatment. (12)

Isospora belli is not used for biotechnology. Due to the complex and varied environment it requires to reproduce, I. belli has not been cultivated continuously through its entire life cycle. (7) Most work involving Apicomplexa organisms is done with C. parvum or T. gondii.

Since I. belli is not used for biotechnology, most current research relates to its role as a pathogen. One such paper compared the genetics and development of I. belli sporocysts collected from infected patients in Thailand. The researchers observed people with HIV/AIDS, corticosteroid-treated patients, and immunocompetent individuals. The study found much diversity in oocyst size but noted a common length-width ratio of oocysts greater than 1.2. In this study 27% of the excreted oocysts had progressed to a stage where two sporocysts could be seen. RNA comparison confirmed there was not a great deal of strain variation. (13)

Under normal conditions I. belli always reproduces in the small intestine. A few cases have been noted, all of them involving immunocompromised patients, where I. belli is found outside the intestines. In this study it is revealed that post mortem tissue samples from AIDS patients revealed the presence of I. belli merozoites within the gallbladder. The exam also found a macrogamete in the gallbladder indicating I. belli had initiated the sexual phase of its life cycle. (14)

A study in 2005 reported a case where a two year old child developed isosporiasis as a result of receiving prolonged corticosteroids therapy. This child had a history of systemic vasculitis and was admitted after the sudden onset of watery diarrhea. This case was unique because merozoites were visible in the stool along with oocysts. Prior to this report, only one other case of Isosporiasis had resulted from steroid treatments. The disease in this case, was resistant to dihydrofolate reductase inhibitor combined with sulfonamide even though Isosporiasis normally responds well to such treatment. (15)