A Viral Biorealm page on the family Kashmir Bee Virus 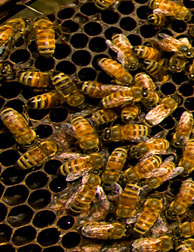 Kashmir bee virus (KBV) infects many types of bees including Apis mellifera, the European honey bee [6]. The virus effects both brood and adult bees. Infected adults die within a few days of exposure to the virus but infected larvae may survive and develop into seemingly unaffected adults [2]. While Kashmir bee virus infection alone may not be of much significance, it has been implicated as part of a much larger agricultural issue.

A. mellifera is the species of bee used in the US for crop pollination and commercial honey production. In 2000, an estimated $14.6 billion of US crops were pollinated by A. mellifera [8]. However, recently, many A. mellifera colonies have been disappearing due to a phenomenon known as Colony Collapse Disorder (CCD) [1]. In the spring of 2007, many beekeepers across the US reported loss of 80-100% of their bee colonies. Although it is unclear exactly what causes CCD, a group of related bee viruses including KBV have been implicated [8]. It seems as if these viruses interact with parasitic mite infestations and other environmental factors to cause CCD. A better understanding of KBV and other bee viruses could aid in the control and prevention of CCD, rescuing the US from a potential agricultural crisis.

The KBV genome is composed of (+) sense ssRNA and is 9506 nt in length. The genome contains two open reading frames each coding for a polyprotein. These ORFs are separated by and intergenic region and flanked with short non-coding regions. [6]

The KBV virion consists of a non-enveloped, icosohedral capsid. The capsid is constructed from 3 structural proteins [5]. The capsid appears round and is approximately 30 nm in width [8].

Reproductive Cycle of Kashmir Bee Virus in a Host Cell

Little is specifically known about the KBV reproductive cycle. Some insight into the process can be gained by examining related viruses and examining the patterns of viral RNA and protein expression in infected bees.

The infective ability and life cycle of Rhopalosiphum padi virus (RhPV), also of the Cripavirus genus, has been studied to some extent. In cell culture, viral protein is localized to the cytoplasm, as visualized by immunogold labeling. This study also observed clusters of single membrane vesicles associated with virions in the early stages of infection. Crytalline arrays of virus particles and dense amorphous cytoplasmic structures were also observed.[3] Similar observations have been made for related viruses so it is reasonable to think that KBV infection may follow a similar scheme.

Another clue can be taken from the apparent ability of KBV to maintain a latent infection. Since KBV does not have a DNA intermediate, it cannot enter true lysogeny and splice into the host genome but it can remain in the cell without any observable pathology. Molecular evidence for latent infection was found when ELISA (immuno assay)results for viral-capsid proteins and RT-PCR amplification of viral RNA where compared as diagnostic techniques. In a majority of cases, viral RNA was present with little or no viral-capsid proteins.[9] This suggests that the viral RNA can persist in infected cells with limited replication and formation of new virus particles.

KBV is known to infect many species of bees across a large geographic distribution. Cases of A. melifera infection have been reported worldwide, although cases involved in CCD have only been reported in the US. KBV is also known to infect A. cerana (Asiatic honey bee) in parts of Southeast Asia and India, where the virus is believed to have originated. KBV has also been reported in populations of Bombus spp. (bumble bees) in New Zealand and Vespula germanica (European wasp) in Australia. [6] Some evidence shows that mites such as Varroa destructor not only act as vectors for viral sread, but also as hosts in which viral replication occurs [9].

KBV is spread between bees in a colony and between colonies through many methods of transmission. KBV can be introduced to hives by mites such as Varroa destructor [4] and can also be spread between worker bees and from the queen bee to her offspring. Viral RNA has been amplified from queens and their eggs suggesting that the virus can be transferred via a transovarial route. Viral RNA has also been amplified from food sources such as honey, brood food, and royal jelly. Since these food sources are partially composed of secretions from worker bees, this is a likely method of bee-to-bee transmission. [9]

As mentioned previously, KBV infection of shows no visually detectable signs of pathology [9]. KBV is commonly found in bees co-infected with other related viruses.